Scott Dixon got a little measure of revenge Friday morning in the final practice for the 51st Rolex 24 at Daytona. The open-wheel star set the fastest time in the No. 02 Target/TELMEX Chip Ganassi Racing BMW/Riley with a lap of 1:41.845 at Daytona International Speedway. Dixon qualified second for Saturday’s race behind teammate Scott Pruett, who was second Friday morning at 1:42.113 in the No. 01 TELMEX/Target Chip Ganassi Racing entry.

Sebastien Bourdais was third-fastest in Starworks Motorsport’s Ford/Riley at 1:42.416. 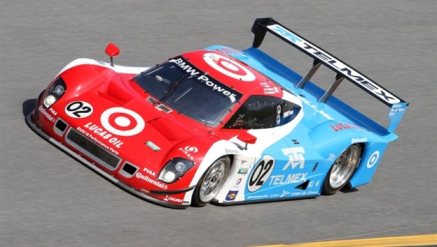 In GX, Ryan Eversley was the fastest driver with a 1:57.289 in BGB Motorsports’ No. 70 Porsche Cayman. Seth Thomas was second at 1:59.993 in the No. 22 Bullet Racing Porsche Cayman, followed by Mazdaspeed/Speedsource’s Sylvain Tremblay with a 2:07.219 in the No. 70 Mazda 6.
Simon Pagenaud Lights It Up In Rolex Series Night Practice

Simon Pagenaud set the fastest time in night practice Thursday for the 51sst Rolex 24 at Daytona, a 1:41.673 lap at Daytona International Speedway. The Frenchman, driving the No. 42 Team Sahlen’s BMW/Riley, was 0.682 seconds clear of Dario Franchitti in the No. 02 Target/TELMEX Chip Ganassi Racing BMW/Riley. Allan McNish sat third for Starworks Motorsport at 1:42.525 in the team’s No. 2 BMW/Riley.

Another class pole-winner was quickest in the night practice. Napleton Porsche Racing’s Shane Lewis set the fastest time in GX with a lap of 1:56.073. The No. 16 Porsche Cayman was 2.117 seconds clear of Ryan Everlsey in BGB Motorsports’ Porsche Cayman. Jonathan Bomarito was third in class at 2:01.723 in Mazdaspeed/Speedsource’s No. 70 Mazda 6.

Michael Valiante set the fastest time during the final practice session Thursday afternoon before qualifying for the 51st Rolex 24 at Daytona. The No. 6 Michael Shank Racing Ford/Riley set a best lap of 1:42.122, good enough for a 0.139-second cushion over Dane Cameron in Team Sahlen’s No. 42 BMW/Riley. Jamie McMurray was third at 1:42.431 in the No. 02 Target/TELMEX Chip Ganassi Racing Ford/Riley.

Nick Tandy set the fastest GT time at 1:48.299 in Konrad Motorsport/Orbit Racing’s Porsche GT3. The class was a dogfight with the top eight cars covered by a second. Sean Edwards was second in MOMO/NGT Motorsport’s No. 30 Porsche GT3 at 1:48.478, followed by Magnus Racing’s Andy Lally in Magnus Racing’s No. 44 Porsche at 1:48.646.

Shane Lewis went quickest in GX for Napleton Racing in the No. 16 Porsche Cayman. His time of 1:54.162 was ahead of Bullett Racing’s Darryl O’Young at 1:59.540. Andrew Carbonell was third in class for Freedom Autosport/Speedsource’s Mazda 6 at 2:02.283.

Juan Pablo Montoya set the fastest time in the opening practice for the 51st Rolex 24 at Daytona on Thursday morning in the No. 01 TELMEX/Target Chip Ganassi Racing BMW/Riley. The NASCAR Sprint Cup star set a lap of 1:40.937 on his next-to-last lap of the one-hour session.

He was one second clear of defending Rolex 24 winner AJ Allmendinger in Michael Shank Racing’s No. 60 Ford/Riley. Dane Cameron was third in the session at 1:42.304 in the No. 42 BMW/Riley from Team Sahlen.

David Donohue set the pace in GX. His best lap of 1:54.310 in Porsche Napleton Racing Porsche Cayman was ahead of Ryan Eversley in BGM Motorsports’ No. 38 Porsche; Eversley’s best lap was a 1:58.248.