Last season’s surprise package, APO Sport pair Alex Osborne (Towcester) and James May (Brighton) have confirmed they are returning to the Avon Tyres British GT Championship this year with their family run outfit, and have every intention of taking the popular GT4 class honours.

Returning to GT4 with a rebuilt Ginetta G50, the car Osborne and May used to great effect last year, both 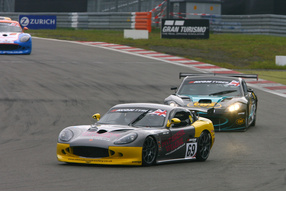 drivers are confident they’ve learnt from the previous seasons selected outings, and will be going all out to win the class title.

Joining the 2012 season at round two, the support race for the 24 Hours of Nürburgring, APO Sport were immediately on the pace and they continued this form into Rockingham (2nd), Brands Hatch (2nd), Snetterton (2 x 4ths) and Silverstone (3rd). Osborne and May finished the season fourth in class with three podiums and 104.5 points

Elsewhere in the class, series and Ginetta stalwarts, Century Motorsport have confirmed another Ginetta G50 entry, with Liverpudlian youngster, Declan Jones registering as the first driver with the Warwickshire-based team.

This year will be Century’s fifth in GT4 and last season saw the team have its most successful season to date, claiming second and third places in the class with Zoe Wenham and Dom Evans. In 2011, the team finished fourth, and team principal, Nathan Freke, himself took the team to third in 2010 alongside Danish female racer, Vibe Smed.

“APO Sport’s return is great for British GT. We regularly see teams try out GT4 for a few races to experience what we bring, and just as regularly they return. Alex and James are quick drivers and their family –run team have shown their worth in the series. GT4 looks good for 2013 and the return of European GT4 will for sure strengthen the category as a whole. We look forward to welcoming the European teams and drivers to our paddock at Silverstone.”

“It’s great to be back. We’d never driven rear-wheel drive until last year, so it was a real test to see if we liked it. We’re in good shape and even with some of the new cars that look set to join GT4, I really think we’re in good shape. As we saw last year it depends who is driving the car, for example a Ginetta in one-persons hands can be front of the grid or the back grid. All we can concentrate on is ensuring we do what we do best; minimising spins is the top priority! The leap last year for us (from previous racing endeavours) was huge and we learnt a big lesson on keeping it consistent. We’ll be really disappointed if we don’t win the GT4 series.”

“We’re back on the grid, and we have to thank our super sponsors, including The Money Shop, Excel Insurance, and Patisserie Valerie, for getting us here. I really enjoyed our races last season and the Ginetta proved it was the car to beat in the hands of Warren (Hughes) and Jody (Fannin). I think the Lotus is the quickest car out there in terms of raw pace, but we had the beating of it on most occasions. If we’re not challenging for race wins week in week out this season, we’ll disappointed.

“The news that both my 2012 partners Chicago Soft and The London Perfume Company, together with the addition of www.race-cars.com, will support me in 2013 meant that I could step up to GT racing with Century Motorsport and continue the successful relationship with Nathan Freke and the team. This is the perfect next step for my career and we are all looking forward to a successful year.”

“The team worked well with Declan in 2012 and he rewarded us with excellent on track results. We are in talks with a number of quick potential partners for him and the final pairing will make a formidable team to challenge for the title. We will be running the latest specification Ginetta G50 GT4 car which we will take delivery of in the next couple of weeks.”