Erebus Motorsport has released photographs of the dramatically different livery that will adorn its pair of SLS AMG GT3 Gullwings on the eve of the Liqui-Moly Bathurst 12 Hour. Gone is the chrome livery that led to Erebus Motorsport being awarded ‘The Most Beautiful Car’ at the 2011 AMG Customer Sports Awards, in its place is a striking matte black livery combined with chrome and a highlight colour on each of the cars – yellow and purple. The machine featuring the yellow highlights is a nod to its lead driver – five times DTM Champion, Bernd Schneider, who has traditionally had yellow incorporated into each of his racecar designs.

He will be joined by current FIA GT1 World Team Champion, Thomas Jager – who previously raced in 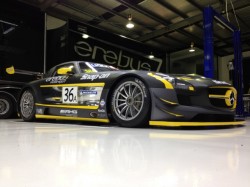 Australia on the Gold Coast last October and Alex Roloff – an experienced SLS AMG GT3 racer from the VLN Series that is based on the Nurburgring Nordschleife. On the car that will be piloted by Erebus Motorsport V8 Supercar drivers Tim Slade and Lee Holdsworth and regular Erebus Australian GT racer, Peter Hackett, a purple highlight has been added to the matte black.

The idea of steering away from the ‘traditional’ chrome was all about evolving the Erebus Motorsport identity and achieving a technological advantage.

“By removing the chrome wrap, we save a significant amount of weight from the car,” explained Erebus Motorsport’s General Manager, Motorsport, Barry Ryan. “Under this year’s regulations we have a lighter minimum weight than we were running at last year’s Bathurst 12 Hour. We’ve gone all out this year in association with our partners at AMG Customer Sports to try and win the race. It has been a 12 month process leading up to this weekend and the design of the cars has been very much a part of that.We haven’t walked away from the chrome – it is still there, but we see this as an evolution. It will be quite a sight to see both the SLS’ in the early morning light on the Mountain. The design really highlights the unique lines on the SLS AMG GT3 and the seriousness of Erebus Motorsport’s approach to this year’s race.”

The German pilots of car #36 are all now in Sydney and are resting up prior to transferring to the Mountain on Wednesday. Meantime, Holdsworth, Slade and Hackett will arrive in Australia’s motorsport mecca on Thursday.

The two Erebus Motorsport cars will be part of a 50-strong entry list for the Liqui-Moly Bathurst 12 Hour, with the Germans being one nationality of 17 being represented – a record number of nations represented at Bathurst.

Erebus Motorsport will host a group of corporate guests from Mercedes-Benz Australia throughout the weekend and with the high profile German pilots joining the squad, the eyes of the world will no doubt be on the Australian team.

Practice for the 2013 Liqui-Moly Bathurst 12 Hour begins on Friday morning, with a two-part Qualifying session on Saturday and the once around the clock race beginning at a new time of 7am on Sunday morning.