Young Driver AMR took its second win in the FIA World Endurance Championship (FIA WEC) at the sixth round of the series in Japan. The win of Christoffer Nygaard, Kristian Poulsen und Bruno Senna in the Aston Martin Racing entered Aston Martin Vantage GTE at Fuji was a rather bizarre one. Due to heavy rain, the race was started three times behind the Safety-Car, before the race director finally called it a day and stopped the race for good after only 16 laps of running. 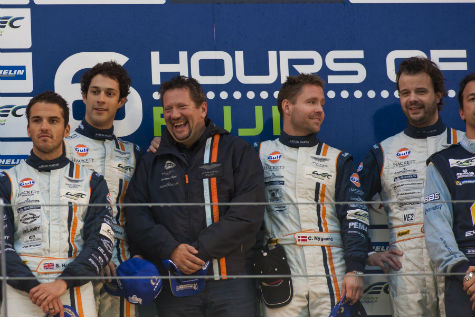 Young Driver AMR had a perfect start at the Fuji Speedway in Japan. Bruno Senna, who strengthened Young Driver AMR for the Japanese round of the FIA WEC, claimed the class Pole Position together with Christoffer Nygaard. It was the fourth Pole for the #95 Aston Martin in six races.

Senna took the start in the Aston Martin in a race, which was started behind the Safety-Car in wet conditions and subsequently halted, as heavy rain didn’t allow to race. After a two-hour break, the race was started for the second time, only to be halted again after eight laps due to the severe weather conditions. After a third attempt to start the race, it was finally stopped for good and Senna, Nygaard and Poulsen took the victory in the GTE-Am-class. As less then 75% of the original race distance was completed, they were only awarded with half points according to the regulations.

„Bruno (Senna) and Christoffer (Nygaard) drove a great Qualifying and when they claimed the Pole Position, we didn’t know, how important this eventually would be considering the circumstances in the race”, Young Driver AMR´s Jan Struve said. “The conditions were really bad and Bruno had so much aquaplaning on the way to the starting grid, that he made a small contact with the rear end of the car. Our mechanics then did a brilliant job and replaced the damaged parts super quick und just in time for the race. It’s a shame that the race distance was reduced so much and only half points were awarded, but we are happy with the victory and made up ground in the championship. At the end it was the right decision to stop the race as safety always comes first. We are really sorry for the very enthusiastic Japanese Fans, as we couldn’t entertain them with a great race. Now we are looking forward for a great race and hopefully another podium finish at Shanghai.”

„The conditions were very difficult but the race directors were ‘on it’ and they need to be congratulated for the safety decisions made today,” Bruno Senna commented. “With one mistake out there everyone would have been in trouble. Of course, I’m sorry for the fans – they were really out in force, despite the weather. However, we have to remember that racing is not only about emotion but about safety too. For the team it’s good to score points. It’s been great to come into the #95 car and help them get pole position yesterday, which has essentially enabled them to get these points today.