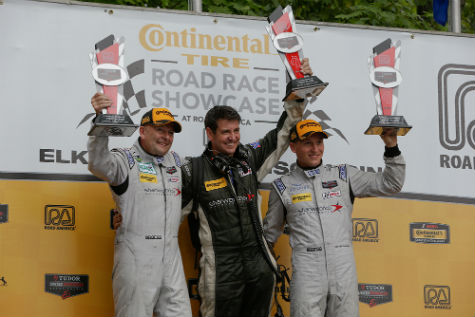 Round 10 of the 2014 TUDOR United SportsCar Championship commenced for the Fort Lauderdale based team with the announcement of the return of its #78 HPD-Riley DP with Canadian IndyCar driver, James Hinchcliffe, joining Starworks regular Scott Mayer behind the wheel. The usual suspects of Mirco Schultis and Renger van der Zande were all set in the #8 Starworks PC, with Alex Popow joining Martin Fuentes and John Martin for one race in #7.

Practice for all three cars ran with a few minor issues on Friday and Saturday, with qualifying producing P11 (P10 after #90’s time exclusion), P8 and P4 starting grid results for the 78, 7 and 8 cars respectively.

Race day on Sunday brought bittersweet results for the Florida based squad, however. Following great starts by Mirco Schultis in #8, who was soon up to P2, Scott Mayer soon in P9 in the #78 DP and Martin Fuentes in the 7 car, an incident between the 78, #09 PC & #56 at Canada corner brought out the first full course yellow caution (FCY) and an early retirement for the #78 Starworks Riley-HPD after only six minutes of running.

The race returned to green on lap eight with Mirco in P6 and Martin in P8 and the third FCY coming out at the 1 hour 50 minutes mark. The PC pit window opened on lap 21 with driver changes in the 7 car to Alex Popow and Renger van der Zande stepping in to the 8 car.

The track went back to green on lap 25 with Renger running in P6 and Alex in P8. During the fourth yellow caution of the day (with just over an hour of the race remaining), the Starworks team fuelled both PC cars adequately to take them to the finish and when Renger was released he made the “Audi Move of the Race” to take the PC class lead from Rayhall in #25.

With John Martin now in the driving seat of the 7 car for the closing stage, he took it up to P4 before the fifth yellow flag was raised. After 20 minutes and a brief spell at green, Renger was able to make a charge in the 8 car to knock on the P class door, only 1.73 seconds behind the #60 Ford Riley of Negri Jr in P3 overall. The final FCY was brief and the sprint finish to the 2 hours 45 minutes long enduro was 10 minutes of nail biting tension. John unfortunately lost out on the restart, having been nudged by #52 PC, and had to be content with P5 at the chequer, while Renger maintained his dominant lead to win the PC class in style and in sixth place overall.

Renger van der Zande, #8 Starworks Motorsport PC: “That was a great race, but all the hard work was done at the beginning! Mirco did a great job to get to P2 in the first stint. After that we were running well and the team made the call to get me in for a pit stop and back out again in first. I love my team! The guys are fantastic and did a great job. I am very happy for everyone as they have worked so hard, and for Mirco, to get our second win of the season.”

Martin Fuentes, #7 Starworks Motorsport PC: “It was a complicated weekend for our car because we couldn’t find a problem that was in the engine; we were losing a lot of time on the straights. We could have had third place, but an unfortunate hit between one driver and my teammate on the main straight cost us to finish 5th. We are looking forward to Virginia now, with some more good points for the team.”

“I am thrilled for the 8 car, and at the same time bitterly disappointed for the #78 HPD Riley and our crew as we were all very much looking forward to the race. To be taken out of commission so early was very disappointing for everyone concerned who had worked so hard to get the car here. We are crushed for Martin and the 7 car losing out on its podium run. John was forced in to the wall, but still fifth is okay and brings home some good points for him. He was on pace and shows that the 7 car is also in good shape for the Championship fight with three races to go.”