R.Ferri Motorsport RACING WITH FERRARI raced into the record books on Saturday as team driver Olivier Beretta made a dramatic last-lap pass to win the season-opening Pirelli World Challenge race at Circuit of the Americas in the #61 Ferrari 458 Italia GT3. 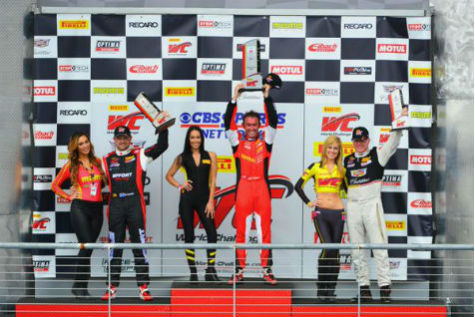 Making just his second career World Challenge start, the former Formula 1 timed the start to perfection and held on to third place as the 49-car field made a clean start through the iconic elevated turn one at the Circuit of the Americas.

“I was surprised at the start because I saw the Lamborghini jump but at the same time, I saw the red light and I had one tenth of a second to think and I stopped but didn’t want to stall,” said Beretta. “But then the red light went away and the race went green, so it was a confusing moment. I pushed and had a good start.”

After Beretta slotted in to third, the pole sitting car was judged to have jumped the start and was penalized, leaving Beretta to chase down the leading Porsche. Making the most of his Pirelli traction, Beretta stalked the leader and closed the gap each lap. After taking the white flag, he made an impressive move to take the point on the final lap and cross the finish line 1.6-seconds clear of the field after 49 minutes of green-flag racing.

“I pushed and had a good start,” said Beretta. “I kept pushing and the (leading) Porsche did a very good job. When I realized it was close to the end of the race, I said I ‘have to go, I have to find a way (around)’. I tried to do a qualifying lap. I took many risks, but in the end it paid off. I’m happy for the team, for Ferrari, for Remo (Ferri, team owner), and the guys did a very good job. The preparation and the set up was great from the engineer and the team. We have a good group and we just need to keep going. The season is very long, we have to enjoy the moment, and we have to keep going like this.”

The season-opening win marked a strong foot forward for the team, which scored third in the 2014 World Challenge championship standings and will look to once again be a competitive force in 2015.

“We had a pretty good season and learned a lot last year,” said Team Owner Remo Ferri. “So we took what we learned and tried to make it better. Today, I’m happy that we got the result. It’s a long season and I think there is a lot of work ahead of us. It’s the first race, so there’s a lot to do and a lot to work on. We have a very good car and Olivier did a fantastic job. The team worked very hard.”

With some 19 races yet to run before a champion is crowned, the experienced team owner knows that his group will need to stay focused on the future as the team prepares to return to competition again in race two on Sunday.

“The expectation for tomorrow is to be on the podium again,” said Ferri. “We always want to be Number 1, but we will take whatever comes. The most important thing is to bring the car home and score points. That’s how you win the championship. You can’t win every race even though you try but at the end of the day you must finish the race and bring points home.”

The 2015 Pirelli World Challenge GT season will resume on Sunday at 1:25 PM Central Time, with the race set to be streamed live on www.world-challengetv.com.