The summer break is over and action resumes in the 24H SERIES powered by Hankook with this week’s 24H BARCELONA (4-6 September, 2015) at Circuit de Barcelona Catalunya. The event is the fifth and penultimate round of this year’s series and has a capacity grid with 74 teams on the entry list to ensure a good mix of GTs and touring cars. “This is the first time at Barcelona that we have reached the maximum capacity of the grid. We even had to use a waiting list for teams that wanted to race with us, but we weren’t able to accommodate, such is the interest for the event. Instead, these teams have been given priority to participate in the next race, the Hankook 12H EPILOG BRNO. But now, we are totally focussed on the 24H BARCELONA,” says Daphne Gengler on behalf of CREVENTIC. The Dutch agency is the organiser and promoter of the event, in close co-operation with the Circuit de Barcelona Catalunya and the Royal Automobile Club of Catalunya (RACC). 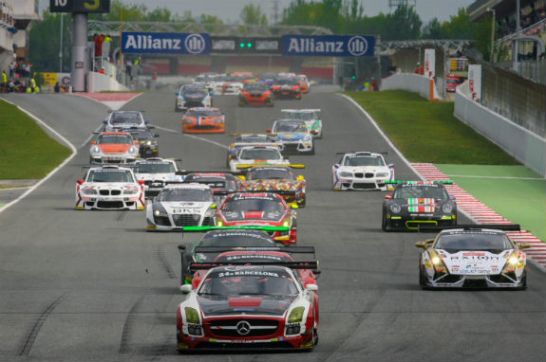 Many drivers and team members who were there will remember last year’s 24H BARCELONA because of the torrential rain and hailstorm on Friday evening. Although the weather forecast for this year’s event also includes a possibility of a rain shower every now and then, sunny and warm weather is expected for the most of the upcoming week.

Last year’s race at the Circuit de Barcelona Catalunya saw Czech team Scuderia Praha claim victory with its Ferrari F458 Italia GT3. Of course, the outfit will be back to defend its win, but will have to face fierce opposition in the A6 class. Once again, the Mercedes-Benz SLS AMG GT3 is the car of choice, with Car Collection Motorsport running two cars and HP Racing, Hofor Racing, Ram Racing and SPS automotive performance each running one car to make it a total of six gullwings on the grid. Next to the Ferrari and the Mercedes, the BMW Z4 GT3 is also a winning car in history of the 24H BARCELONA and Walkenhorst Motorsport will try to build on this success. Spanish team Drivex will run an Audi R8 LMS ultra.

Eight teams are competing in the 997 class for Porsche Cup cars while the SP2 class has eleven entries, including three Lamborghini Huracán cars, a Dodge Viper Competition Coupé, a Porsche 997 Cup S, a Chevrolet Corvette and the MARC Focus, MARC Mazda 3 and GC Automobile silhouette cars. The SP3 class has its usual variety of GT4 cars with Ginetta, Lotus, Aston Martin and Porsche, plus a Saker GT TDI, a Maserati Gran Turismo and a BMW M3 V8. The A5 touring car class is a BMW-only affair, with M235i Racing Cup, E46 M3, M3 CLS, Z4 M, 135D GTR and 320D WTCC cars.

With 15 cars entered, the A3T class is the biggest in the field and it will be no surprise that SEAT customer teams have a strong presence in the home race of the brand. The entry list includes seven SEAT Leon Cup Racers and five SEAT Leon Supercopa cars. One of the drivers in a SEAT is Spanish motorcycle ace Laia Sanz, 13 times’ women’s trials world champion and a double winner in the female category of the Dakar Rally. The only non-SEATs in class are a Volkswagen Golf and two Peugeot 208 GTis. The A2 class has nine cars, with two Honda Civics, five Renault Clios and two Peugeot RCZs, one of them sporting the famous Michel Vaillant livery. The D1 diesel class consists of two Volkswagen Golf TDIs and one SEAT Leon TDI.

“We are really pleased with the huge interest for the event, with teams and drivers from 33 countries to reflect the international status this race has developed over the past years,” Daphne Gengler says. “Moreover, it is good to see that the number of diesel powered cars is increasing again, too, something we have been working on this season. We are looking forward to another great race in co-operation with our partners at the circuit and the RACC.”

As usual in the 24H SERIES powered by Hankook, the Korean premium brand is the exclusive tyre supplier for the event. BRM is the official timing partner and provides the trophies for the prize-giving ceremony. SPAA05 LED displays on all cars indicate the position of the cars in the race and Showtrax and Stand21 have sales and service booths in the paddock. CREVENTIC will also use the presence of the numerous teams in Spain to publish the calendar of the 24H SERIES powered by Hankook for 2016.

After optional private tests on Thursday and Friday, official track action starts on Friday afternoon with free practice (16.30-17.30 hrs) and qualifying (18.00-19.45 hrs), followed by night practice (20.45-22.15 hrs). The race starts on Saturday at noon and ends 24 hours later.  The entire event is streamed live on the series’ website.  More information about the 24H BARCELONA and the other rounds of the 24H SERIES powered by Hankook can be found at: http://www.24hseries.com.