Who will be the new Porsche Junior for the 2016 Porsche Carrera Cup Deutschland? At the Lausitzring, the selection process has entered its final lap. From more than 100 applicants, four talented young drivers have qualified for the finals on the race circuit. On Tuesday and Wednesday, the candidates congregated to secure one of the coveted scholarship positions in the Porsche Carrera Cup Deutschland. The finalists were Germany’s Marvin Dienst (18), South African Raul Joshua Hyman (19), Kevin Jörg (20) from Switzerland and the Norwegian Dennis Olsen (19). After extensive tests and interviews at the first selection round in Potsdam, the four qualified for the shootout on the race track. 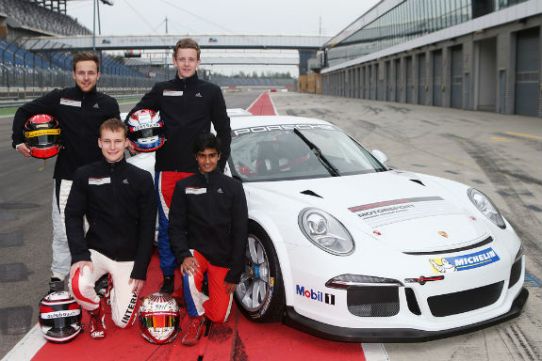 Marvin Dienst comes from Lampertheim in the federal state of Hesse and last weekend secured the title of the ADAC Formula 4. Raul Joshua Hyman was born in South Africa but now lives in London and races in the FIA Formula 3 European Championship. Kevin Jörg comes from Weesen in Switzerland. He and Dennis Olsen from Valer i Ostfold in Norway have celebrated successes in the Formula Renault. All four young drivers have no experience in GT racing as yet.

At tests with the 460 hp Porsche 911 GT3 Cup, each of the talented youngsters had the same number of tyres at their disposal and worked together with Porsche engineers on setting up the vehicle. While analysing data, the pilots learned valuable tips from Porsche Junior Sven Müller, who was on site as a benchmark driver. In several driving sessions, a race weekend was simulated with practice runs, a qualifying session and a race. The most promising young driver receives a scholarship grant of 150,000 Euro and extensive support: Driver coach Sascha Maassen accompanies the Porsche Juniors as an instructor. As part of the programme, the juniors receive training in media matters, fitness and mental preparation as well as sponsor obligations.

“This is the first time candidates were able to apply for the scholarship on their own. We received more than a hundred requests and we invited eight talented youngsters to Potsdam to participate in the first stage of the selection process. From these eight we chose four pilots to take part in the driving tests. We were impressed with all of them. Selecting our new junior won’t be easy. In addition to sheer speed on the track we also take into account their personalities, how they work within a team and their communication skills. We will meticulously evaluate all the data over the next few weeks and we’ll then make our decision,” explained Andrea Hagenbach, Manager of the Porsche Motorsport Junior Programme.

The candidate from Porsche’s international one-make cups contests the Porsche Mobil 1 Supercup next season, with the winner from the circle of pilots without GT experience competing in the Porsche Carrera Cup Deutschland. Talent scout initiatives enjoy a long tradition at Porsche Motorsport. Using this path, many scholarship pilots have managed to climb the career ladder into international GT and prototype racing. Recently, Michael Christensen and Earl Bamber were promoted from junior status to Porsche works driver.