REBELLION Racing closed a successful 2015 racing season on a high in Bahrain. The #13 Rebellion R-One AER won the last race of the season, the 6 Hours of Bahrain. In doing so, the #13 crew secured second place in the teams’ championship and completed a 1-2 finish for the Swiss team in the FIA WEC Endurance Trophy for Private LMP1 Teams. 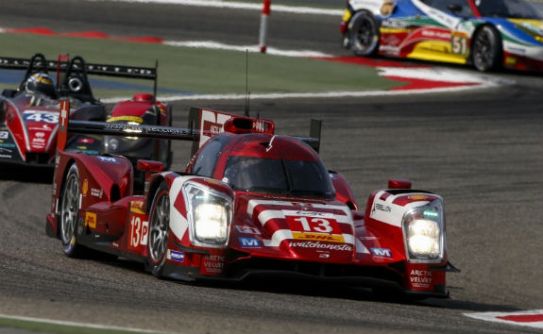 During the 2015 FIA WEC season, REBELLION Racing won four of the six races that the team competed in with their two Rebellion R-One AER cars including a 1-2 finish at the legendary Le Mans 24 Hours and secured six pole positions along the way.

Team REBELLION Racing won their fourth straight FIA WEC Endurance Trophy for Private LMP1 Teams, winning in 2012, 2013, 2014 and 2015. It’s an achievement that the whole team is proud of.

The 6 Hours of Bahrain was a tough race with, dramas for all three cars that were competing for the Privateer win.
After a strong start, Mathias Beche and Nicolas Prost in #12 Rebellion R-One AER were building a gap over the sister car #13 driven by Alexandre Imperatori, Mathéo Tuscher and Dominik Kraihamer and up until the fourth hour, the battle was intense between the two Swiss cars.

The race changed when Rebellion R-One #13 was struck with a spark plug misfire, and had to be pulled into the garage for repairs. The team had prepared and trained before the race for that specific problem and the #13 car was sent back into the race after a short stop.

Later in the same hour, the #12 Rebellion R-One AER was forced into a unscheduled stop too, a torque sensor problem causing a short in the car’s electronics and lighting system.  During the stop, the team carried out a precautionary brake change. As a consquence the #4 CLM took the lead of the LMP1 Privateers, but the Austrian car the also soon hit trouble with its brakes and had to stop for repair.

The #13 Rebellion R-One AER re-took the lead of the LMP1 Privateers and managed to keep the gap with #4 CLM above one minute until the checquered flag.

Alexandre Imperatori and Dominik Kraihamer won their second race of the season in LMP1 Privateer after their victory at Le Mans 24 Hours and Mathéo Tuscher secured his first class win in the FIA WEC.

Bart Hayden – REBELLION Racing Team Manager : « That was a real roller-coaster of a race in Bahrain.  For the first four hours everything was building nicely and then each car in turn hit problems.  It’s nice that we had good competition from the ByKolles team and the championship fight was close at the end.  We were late joining the season, only racing for the first time at the third round, so to bring home first and second place in the Championship is a great achievement.  It’s been a tough season, with moments of joy and times of real sadness, but it’s nice to end the season on a high as we start to look forward to next year.  All the team, the mechanics, engineer, drivers have worked together to get us to this point and it shows the depth of talent and commitment as well as the passion that we have in this team, I’m proud to be a part of it. »

« KUJALA, LEWIS, OCKEY, RATTENBURY AND GDOVIC ARE CHAMPIONS IN THE WORLD FINAL OF THE LAMBORGHINI SUPER TROFEO
ENGEL CLAIMS BACK-TO-BACK VICTORIES AT MACAU »