The FFF Racing Team by ACM made their competition debut in Asia back in May with their entry in the hotly-contested GT Asia Series, winning at just their third attempt. From there the season presented a number of of challenges ahead of their debut in the season-ending Sepang 12-Hours where the Chinese-Italian team once more celebrated success, taking the Pro-Am victory in the grueling event in treacherous conditions. 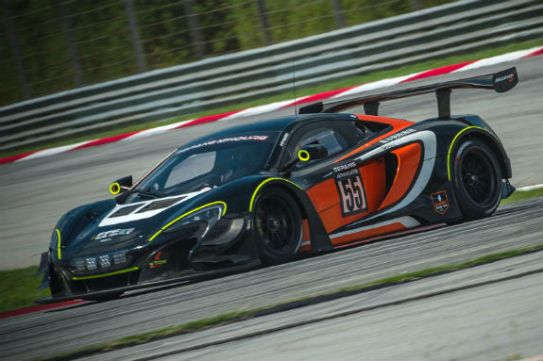 Initially the FFF team had entered two McLarens, but contact for two of their three cars at Macau during the FIA GT World Cup had forced the withdrawal of the second entry. That left 2015 GT Asia Series Okayama winner Hiroshi Hamaguchi to be joined by team-principal Andrea Caldarelli, and factory McLaren GT drivers Alvaro Parente and Andrew Watson in the #55 entry.

Practice was held in testing conditions, with all four drivers turning laps, Parente ultimately running in fourth position behind three Audi R8 LMS cars from the Blancpain Series, the Portugese driver admitting afterwards that conditions had been tough.

“The track conditions were really unstable, with rain and a drying track, but we were able to sign the fourth best lap time in the first practice session and fourth in the second which ran in the night,” Parente explained.

“Our top speed is still below our opponents, but the BoP (Balance of Performance) is fairer here at Sepang.”

Continuing on the pace they had shown in the GT Asia Series Sepang 3-Hour during the heat of summer, Parente, Caldarelli, Hamaguchi and Watson went on to find even more speed from the 3.8-litre twin-turbo V8 McLaren to comfortably qualify inside the top ten, before Parente turned in a blinding lap in the pole shootout to claim a third placed starting position for the once-around-the-clock endurance event.

“Honestly, I did not expect to be in this position after qualifying. It was a pretty good lap, but we have not been this close all week. We still seem to struggle coming out of the corners, but I hope that in the race we can be strong towards the end of the stints. I am very much looking forward to it.”

Parente started the race, the McLaren GT star holding station inside the top five throughout his opening stint, but comfortably within reach of the leaders.

The drivers cycled through their stints for the first four hours, running as high as second, before mother-nature intervened with a tropical downpour just after the four hour mark, forcing the race director to bring the race to a stop for almost two hours.

The restart saw the #55 McLaren battling with GT Asia Series rivals TP12 Racing, before again the weather started to intervene with conditions becoming worse as darkness started to fall.

Once more the race director brought the cars to a stop in pit lane waiting for conditions to improve, with another hour lost before a restart behind the safety car.

Ultimately once the safety car released the field there was just over two hours remaining, with the FFF team still right in the mix and one of just five cars still on the lead lap, the four McLaren drivers continuing on with their strong run all the way to the flag, ultimately claiming fourth outright, and with it, victory in the Pro-Am class.

“I can’t tell you how much this means to us,” Caldarelli admitted post-race. “It has been a challenging debut year for us with a mix of highs and lows, but to come to such an important race and run with the leaders and comfortably claim the Pro-Am win is fantastic and great reward for the team’s efforts this year.

“The whole group did a flawless job all weekend. The BoP was reasonable but we were still lacking straight-line speed. As ‘Am’ drivers, Hiroshi and Andrew did a brilliant job, in fact up until two hours to go, we were just 11-seconds behind the ‘Pro’ leaders, but an issue with tyres in the final rain stint slowed our pace dramatically and dropped us a lap down on the Audis.

“Regardless we are overjoyed with the result – especially as this was our first effort at the Sepang 12-Hours as FFF Racing Team by ACM with McLaren and to take victory, it means a lot for us!”

For the FFF Racing Team by ACM, the focus now turns to 2016 with plans to once more contest an Asian program with the GT Asia Series and the FIA GT World Cup, whilst plans are also on the drawing board for a European program.. More details soon!