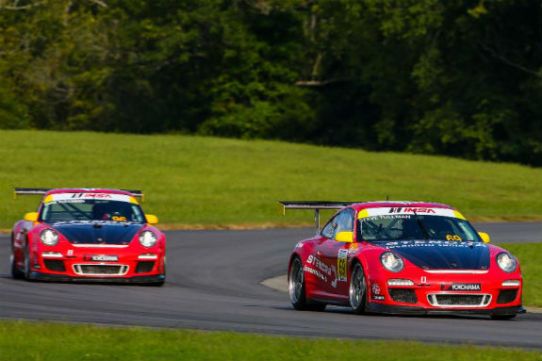 Tullman and his son Max were in the thick of their debut weekend in the Porsche GT3 Cup Challenge USA by Yokohama, and Steve Tullman’s Porsche 911 GT3 Cup Challenge car was in bent and broken pieces in the paddock, just 14 hours before his first start in the series. The Gold Cup-class car had suffered heavy damage in a crash during qualifying, and it looked like Steve’s first weekend of International Motor Sports Association (IMSA) competition may have ended before he even reached the starting grid.

“I felt bad for the car, the team,” Steve Tullman said. “The last thing I wanted to do was demonstrate that I can’t manage the car. The next question was could the crew put it back together?”

The Tullmans and their team, Tullman Walker Racing, decided to try to fix the badly wounded car. That passion and perseverance immediately captured the attention of competitors and created a buzz around the Porsche GT3 Cup paddock at VIR.

As Steve and Max Tullman and their crew worked feverishly with the help of Porsche Motorsport North America to rebuild the car in time to make at least one of the 45-minute races during the weekend, they started to receive visitors in their pit area.

Rival crew members approached the small pop-up tent in the Tullman Walker Racing pit area, asking if the team needed any parts. The Tullmans were more than grateful to accept the help.

The crew worked long, diligent hours to fix the car, with Max Tullman even heading to a local hardware store to buy red spray paint to create a uniform, professional appearance and avoid a “son of Frankenstein” look for the repaired car, which had received parts of various colors from PMNA and rival teams.

Steve Tullman, 50, missed Round 11 on Saturday, but his son Max finished third in his debut Gold Cup start on his 18th birthday in the No. 96 Tullman Walker Racing Porsche. And the next day, less than 48 hours after his car was torn and tattered in the crash, Steve finished third in his first start in the Gold Masters class in the repaired No. 69 Tullman Walker Racing entry. The car showed barely any trace of its damage due to the skilled, persistent attention to detail by the crew. Max also rounded out the weekend by winning the Yokohama Hard Charger Award in the rescheduled Round 4.

So while the Tullmans left their first Porsche GT3 Cup Challenge USA by Yokohama weekend with two podium trophies, they drove back to their home in Chester Springs, Pennsylvania, with something even more gratifying – a new racing home.

“The crew did a great job,” Steve Tullman said. “A lot of people in that paddock came to help, as well. People kindly showed up with parts. They didn’t want us to not compete; they wanted us to compete against them.

“They (rivals) tried to make us feel better by saying it happens to all of us, and it’s true. You drive these cars at the limit, and you’re going to find the limit occasionally. Everyone was so kind and so supportive.”

Said Max: “This was like a home sweet home. That’s where this car belongs, in that type of racing.”

That successful, enjoyable first weekend in the Porsche GT3 Cup Challenge USA by Yokohama was the culmination of a six-year racing journey for the Tullmans.

When Max Tullman was 11, he asked his father to take him to a local track to watch friends who were racing quarter-midgets. Steve was happy to oblige, as he was a car enthusiast since childhood and worked his way up to the shop foreman position at a local Malibu Grand Prix karting franchise right after high school.

Max Tullman got a chance to hop into one of his buddy’s quarter-midgets that day.

“He got in and buzzed around, and next thing you know, we have a couple quarter-midgets,” Steve said, laughing.

Max raced the open-wheel quarter-midgets around the Northeast and Mid-Atlantic for the next 2½ years. Growth forced Max from the small cars, as he reached nearly 5 feet, 11 inches tall before he was 14 years old.

He wanted to continue racing, but he was unsure about the type of car. Father and son began to investigate many different types of race cars. Sprint cars. Legends. Three-quarter midgets. Formula cars.

Said Max, laughing, “It felt like there was a long time talking about what we were going to do next.”

Max and Steve eventually traveled to Infineon Raceway in Northern California, where Max qualified for a Sports Car Club of America (SCCA) license after training in a Formula 3 open-wheel car.

But Steve decided to buy a 2011 Porsche GT3-RS street car, and he and Max became members of New Jersey Motorsports Park near their Pennsylvania home. Max learned by hot-lapping the Porsche and also drove in a few race simulations in the Spec Miata class.

That car was a better fit for Max, literally and figuratively. So he began competing in Spec Miata events at age 15.

Steve offered only financial and moral support for his son, at first. But it didn’t take long for him to catch racing fever.

“We bought the first Spec Miata, and he’s running it, and I thought, ‘Well, I’m thinking I’m there, too, and I started driving around on member days,'” Steve said. “You realize they’re tremendously fun and a tremendous tool to learn with. So we bought another one.”

That began three years of SCCA competition in Spec Miata for father and son. Steve Tullman welcomed friends and brothers Neal and Jim Walker into the sport, both of whom were interested in racing. Together they formed Tullman Walker Racing.

Steve and Max enjoyed racing the Miatas and sometimes brought their Porsche GT3-RS to the track for hot-lapping on Miata race weekends. But that strategy soon became impractical as track time was limited for the Porsche, so the Tullmans sold the GT3-RS and decided to buy a Porsche 911 GT3 Cup race car in summer 2013.

“We figured we’d get a Cup car that we could race in SCCA/PCA/NASA if we wanted to,” Steve said. “Max was in the car, I was in the car. It’s a little bit intimidating, going from the Miata to the GT3 Cup, but it’s also a lot of fun. We were spending time on member days learning the car.”

Steve and Max Tullman continued to race in Spec Miata in 2014 and 2015, also rolling out their Porsche GT3 Cup car for selected events, often with success in mixed-class club racing and regional races.

Their affection for the Cup car blossomed, but there was one problem: One car, two eager drivers.

“We said: “‘Wait a minute. We’re having lots of fun with this car, all of us wanted to drive it. We need another one,'” Steve said.

Then the search for a series began again for father and son. But this one was shorter than the quest for Max a few years earlier.

Steve and Max visited the Porsche GT3 Cup Challenge USA by Yokohama paddock during the event weekend in June 2015 at Watkins Glen. The event was inundated with rain, which ended up being a bonus for drivers curious about the series. There was plenty of downtime in the paddock to meet teams in the series and analyze the championship as a future destination.

“We weren’t quite ready to move away from Spec Miata,” Max Tullman said. “It’s very helpful to get comfortable with other cars. But we were interested because the guys at our local Porsche dealership race up at Watkins Glen. We were invited to the Porsche hospitality, and everyone was really nice and welcoming.

“That race kind of helped us with all the rain delays. We talked with Kelly Moss, Wright Motorsports, Moorespeed. They were all so welcoming. They were recommending different guys to go to. It was almost like that college experience, and you’re trying to find the perfect college and you get to one and you can just feel it. Everyone was so friendly, and the event was very well organized.

“It just seemed the right place to go next.”

Endo wanted to put Stendra into a larger, national spotlight. The Porsche GT3 Cup Challenge USA by Yokohama was a good fit. The Tullmans decided to make their debut at VIR, a track where they had prior experience .

After their eventful, successful debut at VIR, Max Tullman and Jim Walker raced for the team at the next event, in September at Circuit of the Americas in Austin, Texas. Max Tullman, in his second IMSA race, again took home the Yokohama Hard Charger Award.

Tullman Walker Racing intends to compete in the Gold Cup class again this season with two cars. Steve and Max Tullman and Neal and Jim Walker already are looking down the road for new journeys.

Endurance racing is a big attraction for Tullman Walker Racing, regular annual competitors in the 12-hour “Devil in the Dark” endurance race at New Jersey Motorsports Park. They would like to climb to race in the Rolex 24 At Daytona, driving a Porsche 911 in the GT Daytona class.

But regardless of their future path, father and son are grateful for their time together in racing. Steve Tullman spent plenty of time on the road while building his career in biopharmaceuticals, and the success of his companies has allowed him to spend quality, one-on-one time in recent years with all three of his children, Max, Alex and Olivia. Racing is the most frequent common bond he shares with Max.

“The only guarantee you’ve got is you’ll end up on the other side of the grass, eventually,” Steve Tullman said. “So it’s a matter of between now and then how you make your life journey. It’s a wonderful thing for me to be able to enjoy this sport with my son. Hard work plus luck has allowed us to do something rare, and we have a good time with it. We’re fortunate to be able to do this, and the family is very supportive.”

Said Max Tullman: “I’m really lucky to be able to race with my father. Not a lot of kids are able to do that. People are always shocked in a good way that I’m racing with my dad. Bonding time, a lot of memories and always a race journey ahead of us.”