There were two firsts at the second race weekend of the ADAC GT Masters at the Sachsenring (DE). BMW Motorsport Junior Louis Delétraz (CH) drove in the first two GT races of his career. And it was also the first time that Delétraz and Jesse Krohn (FI), the two best BMW Motorsport Juniors in recent years, shared the cockpit of the BMW M6 GT3 of Schubert Motorsport. From a sporting point of view, the weekend didn’t have the desired success, but Delétraz in particular gained valuable experience for his upcoming outings in GT racing.. 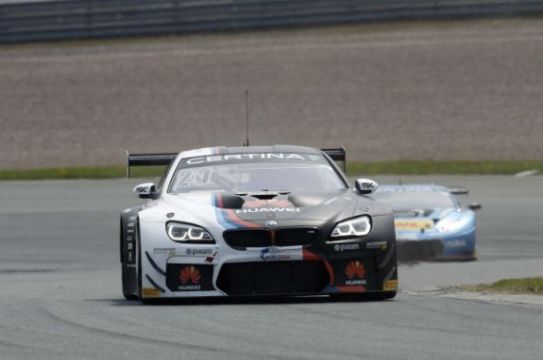 The first race on Saturday got off to a promising start. Krohn was strong in qualifying and got the fifth-fastest time. However, a disqualification saw Team Schubert lose their place on the third row of the grid and they had to start the race from the back of the grid. Krohn and Delétraz were able to move up a few places during the turbulent race with numerous safety car periods and crossed the finish line in 22nd place.

Delétraz took part in the first ADAC GT Masters qualifying session of his career on Sunday. He initially asserted himself well against some of the best GT racing drivers in the world, and was top of the rankings for a while. But he got stuck in traffic in the final minutes and was unable to improve his lap time. So he had to start the race from 22nd on the grid. Despite the difficult starting position, Delétraz and Krohn moved up into 13th place, partly thanks to the Schubert team’s outstanding pit stop, and were even within reach of the points. But about 15 minutes before the end of the race, the bonnet, which was damaged after a slight collision, came off and Krohn was forced to return to the pit early.

The third race weekend of the ADAC GT Masters will be held at the Lausitzring (DE) from 3rd-5th June. The eagerly awaited joint event with the DTM will be held at the EuroSpeedway. Krohn and Delétraz will share the cockpit of the BMW M6 GT3 again there.

Torsten Schubert (Team Principal Schubert Motorsport): “It wasn’t the weekend we were hoping for. It was a shame that we lost the fantastic fifth place on the grid that Jesse achieved, since starting from the back of the grid meant we had no chance of picking up any points. Louis drove very well in qualifying on Sunday, especially considering that he had to compete with the best GT drivers in the world on his debut. There wasn’t a huge difference in time. He did a good job overall and improved from session to session. We would have been able to make it into the points with a bit of luck in the second race, but unfortunately it wasn’t meant to be this time. Now we need to keep working hard to be able to be fighting at the front again at the Lausitzring.”

Jesse Krohn: “In this extremely strong championship it is crucial to be right near the front in qualifying. We didn’t manage this for various reasons. So when you start from right at the back it is really difficult. Louis did a good job at his first GT race weekend. Naturally, he needs to get used to the new style of driving first, but he’s making great progress with each lap that he completes. It’s fun working with him.”

Louis Delétraz: “It was a very special weekend for me. How many people get the opportunity to contest their first GT race in a BMW M6 GT3? That makes me very proud. Unfortunately, we didn’t get the good results we were hoping for, but I learnt a lot anyway, and really enjoyed the races. The dimensions and the weight of the BMW M6 GT3 in particular are completely new to me as a Formula driver. You only really notice it in the race when it gets close in the first turn and you have light collisions with one or two of your rivals. But no doubt I will get used to that quickly, and I hope to be able to finish further up the field at the Lausitzring. I’m already looking forward to it.”