Christian Engelhart (29, DEU) in the Grasser-Racing-Team Lamborghini Huracán GT3 dominated the opening session of this sixth round of the ADAC GT Masters in Zandvoort, Netherlands. He led the first free practice by more than half a second. The two races at the historic circuit on the Dutch North Sea coast will again be highly competitive, with the top positions in FP1 going to Lamborghini, Audi, Bentley, BMW and Porsche, i.e. no fewer than five different manufacturers. 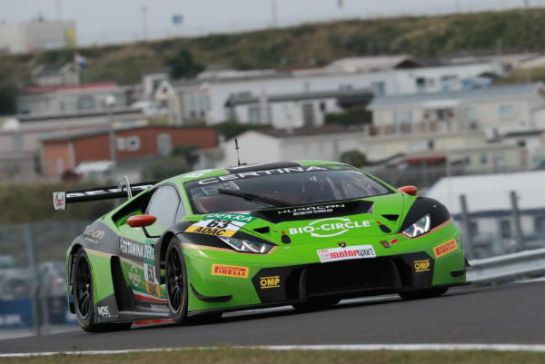 Driving the Lamborghini he shares with Trophy points leader Rolf Ineichen (38, CH), Engelhart dominated the first encounter this Friday afternoon by posting a best time of 1:39.304 minutes with seven minutes to go before the end of the one-hour free practice session. “We’re now expecting rain this afternoon for the second free practice session, so we ‘sacrificed’ a new set of tyres. I managed to post a pretty good lap on them. I don’t think that our lead of half a second is realistic. Things will look different later, but as always, we have a good car, so that means we’re very satisfied so far.”

Connor De Phillippi (23, USA) and Christopher Mies (27, DEU, both Montaplast by Land-Motorsport) placed second in their Audi R8 LMS, followed by Fabian Hamprecht (21, DEU) and Christer Jöns (29, DEU, both Bentley Team ABT) in the faster of the Bentley Continentals. Jesse Krohn (25, FIN) and Louis Delétraz (19, CH, both Schubert Motorsport) were fourth in a BMW M6, placed in front of David Jahn (25, DEU) and Kévin Estre (27, F, both KÜS TEAM75 Bernhard) in the Porsche 911 GT3 R.

Robert Renauer (31, DEU) and Martin Ragginger (28, A, both Precote Herberth Motorsport) in another Porsche 911 GT3 R secured the sixth-fastest time ahead of Philip Geipel (29, DEU) and Rahel Frey (30, CH, both YACO Racing) in an Audi R8 LMS. Reigning champions Sebastian Asch (30, DEU) and Luca Ludwig (27, DEU, both AMG Team Zakspeed) in their Mercedes-AMG took the eight-fastest time from Frédéric Vervisch (30, B) and Christopher Haase (28, DEU, both Montaplast by Land-Motorsport) in an Audi R8 LMS and Patrick Assenheimer (24, DEU) and Dominik Schwager (39, DEU, both Callaway Competition) in a Corvette C7.

After contesting the Lausitzring weekend with two M6s, BMW Team Schubert Motorsport are again up to full strength for Zandvoort. At the wheel of the second BMW M6 will be Claudia Hürtgen (44, DEU), who has won an ADAC GT Masters race on seven previous occasions, partnered by Jeroen den Boer (28, NL). Local favourite den Boer won one of the two Super Sports Car League races at Zandvoort back in 2012. In the 2014 and 2015 seasons, he worked as an engineer at Schubert, but he is now back as a frontline driver. Callaway have also come along with an additional vehicle. The third Corvette C7 is shared by Eric Curran (41, USA) and Dutchman Loris Hezemans (19, NL).

Mirko Bortolotti (26, I, GRT Grasser Racing Team) is about to contest his second ADAC GT Masters race weekend this season. His co-driver in the Lamborghini Huracán is Luca Stolz (21, DEU). Christopher Haase (28, DEU) is stepping in for Peter Hoevenaars (21, NL) in the Audi R8 of Montaplast by Land-Motorsport. In the Porsche 911 entered by bigFM Racing Team Schütz Motorsport, Christopher Zanella (26, CH) returns to partner Marvin Dienst (19, DEU).

Motor racing and much more besides

There is a busy support programme at Zandvoort. In addition to the ADAC GT Masters, there will be racing action from ADAC Formula 4, the ADAC TCR Germany, the Special Touring Car Trophy and the Renault Clio Cup Central Europe. Spectators can look forward to a special treat on Sunday afternoon when Formula 3 drivers vie for honours in the Masters of Formula 3. Winners in previous years have included Lewis Hamilton, Paul di Resta and Max Verstappen. Fans have several opportunities to get within selfie distance of their ADAC GT Masters heroes, including the pit walk on Saturday and Sunday (start time 11:10) plus a Meet the Drivers session on Saturday at 15:45 in front of Mickey’s Bar.