The Lamborghini Blancpain Super Trofeo North American series enters the second half of its exciting 2016 season with Rounds 7 and 8 on Aug. 26-28 at scenic VIRginia International Raceway. 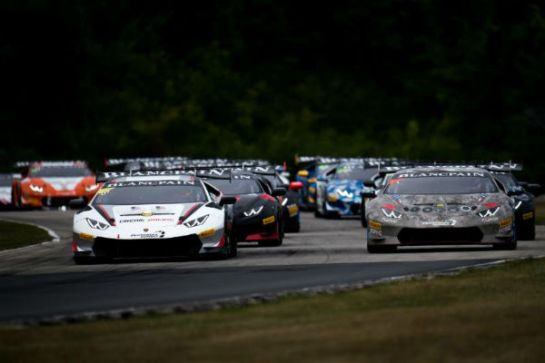 After six exciting rounds to start the 2016 season, one of the fastest one-make series in the world is heading to the 17-turn, 3.27-mile circuit in Danville, Virginia, the only track to host the series in all four of its North American seasons.

Racing in the series is divided into separate podiums, recognizing the breadth of talent in the Super Trofeo field. After each race, there is a podium for the top three finishers overall and the Pro-Am, Amateur and Lamborghini Cup divisions. The championship provides exciting action for professional and aspiring professional drivers alike.

The championships in each division are starting to take shape and become even more competitive with half of the 12-round season complete.

Shinya Michimi has emerged as a force, taking four overall wins this season. His Prestige Performance team dominated three straight races, including an impressive 28.124-second victory in Round 4 at Watkins Glen International and a one-two podium finish with Michimi and his teammates in the No. 10 Prestige Performance Huracán, Craig Duerson and Trent Hindman.

The impressive overall finishes by Duerson and Hindman, including an overall win in Round 5 at Road America, have them at the top of the points board and in prime championship-contending position. The duo leads Brandon Gdovic, the 2015 Super Trofeo World Final Amateur champion, by two points, 69-67.

They each have five podium finishes, with Duerson and Hindman producing three class wins through the first six rounds. But a failure to finish Round 4 opened the door for Gdovic, who had solid finishes in each of the six rounds, including a win in Round 6.

The Amateur division championship race had been the most competitive through the first four rounds of the season, with the top four drivers all running within 10 points of each other. But series veteran Damon Ockey has started to extend a lead in the division with 77 points, followed by rookie Luis Rodriguez Jr. with 68 points and the first-year duo of David Askew and James Burke with 52 points.

Ockey and Rodriguez both had overall podium finishes and split class wins at Watkins Glen over the Fourth of July weekend. Askew and Burke also earned their first podium finishes with a third-place finish in both Rounds 3 and 4 at The Glen.

The VIR race weekend will be the home race for Rodriguez’s North Carolina-based Change Racing team and its Lamborghini Carolinas dealership. Change Racing will run two cars, with Rodriguez in the No. 29 and No. 71 of Jim and Josh Norman. The father-son duo earned their first class win in Round 5 in early August at Road America.

Series sophomore driver Ross Chouest leads the new Lamborghini Cup division. This is the inaugural season for the Lamborghini Cup class, for competitors starting their racing careers. Chouest swept the first six rounds in the championship and leads Will James and Shawn Lawless.

The 2016 season features 10 rounds in North America at five iconic circuits. The season finale and final two rounds will be Dec. 1-4 at Circuit de la Comunitat Valenciana Ricardo Tormo in Valencia, Spain, followed immediately by the World Final, where the Super Trofeo North America, Europe and Asia series will converge to battle for the right to be named a world champion.

The Huracán LP 620-2 Super Trofeo adopts the V10 direct injection engine mounted on the road car, managed by a MoTeC control unit that delivers a maximum output of 620 horsepower. The frame is a hybrid carbon/aluminum construction with modified geometries to house an improved radiator up front and better accommodate the racing gearbox at the rear, which also provides better aerodynamics.