The 2016 Italian GT Championship season is on the way to its last chapter of the season, scheduled for this weekend in Mugello. This was a very important year for Solaris Motorsport, a year in which the team has become Aston Martin Racing Team Partner, establishing a close and mutual cooperation with the English manufacturer and becoming the reference point for Aston Martin in Italy. Solaris had the honor to debut in an Italian series with a Vantage GT3 numbered “007” to recall Aston Martin’s famous cinematographic background. In this first year Francesco Sini and Max Mugelli, the two 2016 Solaris Motorsport drivers, wheeled the English coupè to three podium finishes. 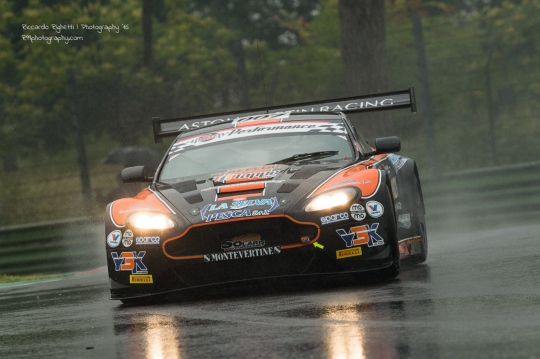 With the last round of the season coming, Roberto Sini, Solaris Motorsport Team Principal, relives this amazing year.

Roberto, how was this 2016?
“I’m satisfied, probably it even went above our expectations. Everything was new for us and to race in such a high competitive championship makes it even more difficult. We had to discover a new car and conquering three podiums in our first season with it makes us very pride of our work. Yeah, for sure we lack a win at the moment, but, anyway, I can say I’m satisfied. Furthermore in Monza we lapped faster than the BES Astons, showing a good potential early.”

What was the best moment in the season?
“The first podium is always special, but Imola’s Race 1 in September has a special place in our hearts. A second place conquered on the field, thanks only to our performances. And David Richards’ visit to our box the day before embellished that amazing weekend. An incomparable mix!”

And the more difficult one?
“Mugello, for sure. We didn’t find the performance and in Race 2 we hit the wall very bad. It was a difficult moment, with the car seriously damaged and a lot of parts to rebuild. We had a very intense summer, with a lot of work in a short time time. Luckily Imola repaid all our efforts.”

What did it mean to be the first to bring a Vantage GT3 on the italian tracks?
“Very few people know that I’m a long-time Aston Martin passionate. I also have an Aston road car in my garage and to be able to bring this brand to Italy with my team was such a big achievement. It makes me and all my guys very proud. From a technical point of view, the italian GT Championship lacked an engine like the Aston V12, it gave the Italian series even more variety. We had to discover the car and its behavior on each track because we didn’t have any data from the past. We did pretty well this season taking into account how much difficult a new project can be and, because of this, we had an Aston Martin engineer at every round and we upgraded the Vantage to the latest specs. Aston Martin is a very fashionable and historic brand, it was a big challenge for us.”

What do we have to expect from Solaris Motorsport in the future?
“Aston Martin for sure. I’m confident that with Prodrive’s support and the latest upgrades for the Vantage GT3, we will be competitive also in 2017 before moving to the new GT3. We would like, with the right requirements, to enter once again the Italian Championship next season, but we are also looking for an international context, such as the GT Open or the Michelin Le Mans Cup.”

What’s about the last round in Mugello?
“For sure we expect a better weekend than in July! Now we have more data and a greater knowledge, we want to perform better, trying to battle once again for the top positions. But looking at the weather forecast, it could rain and then everything could happen!”