The IMSA Prototype Challenge Presented by Mazda takes a bold new step in 2018 with the adoption of an endurance-racing format for a six-race season that opens with the series’ inaugural race at Daytona International Speedway in early January. 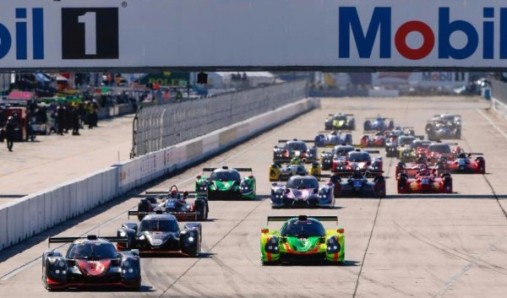 The 2018 IMSA Prototype Challenge again will include both the Le Mans Prototype 3 (LMP3) class for closed-cockpit race cars from a variety of chassis constructors – which began competing in the series this year – along with the Mazda Prototype Challenge (MPC) class, which features Mazda engines powering open-cockpit Elan race cars.

Endurance Races Introduced
The IMSA Prototype Challenge will shift from its longtime “sprint race” format of two 45-minute races per event to a single 1-hour, 45-minute endurance race per weekend for both classes starting next season.

Teams will have the option of using single- or two-driver lineups for each race. In the LMP3 class, all drivers will be required to have an FIA Driver Rating and must be either Bronze- or Silver-rated to be eligible to compete, with a maximum of one Silver-rated driver eligible per car.

Driver ratings are not required for the MPC class. However, drivers with a Platinum rating by the FIA are prohibited from competition. Drivers with Gold ratings also are typically prohibited, but may be considered at the discretion of the race director.

No driver may compete in more than one race car per weekend. The qualifying driver must start the race on the tires used in qualifying, and each competing driver will be required to meet a 40-minute minimum drive time.

Each pit stop also will have a minimum-time requirement, as team personnel and pit lane equipment will be limited. Drivers and tires may be changed at the same time during pit stops, but the driver must be out of the car and no other work may be performed on the car during refueling.

During any full-course caution periods, pass-arounds and class splits for restarts will be used, similar to the current “short yellow” procedures used in the WeatherTech Championship and Continental Tire Challenge. The pits will be closed for all full-course cautions and will reopen at the end of the first green-flag lap following a restart.

As is currently the case in the IMSA Prototype Challenge, LMP3 and MPC class winners and podium finishers each will be recognized individually. All drivers entered in the same car will receive the same amount of points for the car’s finishing position in each race.

“The feedback we’ve received consistently from IMSA Prototype Challenge Presented by Mazda competitors – especially since the introduction of LMP3 race cars to the series this year – is that they had a strong desire to participate in longer races with the option of having two drivers,” said IMSA President Scott Atherton. “This is an example of IMSA listening and responding. We expect that this substantial change to the format will be extremely well received, not only by the competitors and series stakeholders, but also by IMSA race fans.”

Six-Race Schedule Opens With A “Roar”
The 2018 season begins the weekend of Jan. 5-7 on the revered 3.56-mile Daytona International Speedway road circuit as part of the annual Roar Before the Rolex 24 At Daytona, which also includes preseason test sessions for the IMSA WeatherTech SportsCar Championship and the IMSA Continental Tire SportsCar Challenge.

“The addition of a race at Daytona – with its rich sports car racing history and iconic status – presents another intriguing element for the competitors,” Atherton said. “It also will offer compelling content with a first-ever race for the growing number of fans that join us annually at the Roar Before the Rolex 24.”

Like the WeatherTech Championship and Continental Tire Challenge, the IMSA Prototype Challenge moves next to Sebring International Raceway – which has served as the season-opener for the series for the past several years – for Round 2 of the season March 14-16. From there it’s on to Barber Motorsports Park for the third round as part of the Verizon IndyCar Series weekend at the picturesque circuit in Birmingham, Alabama, the weekend of April 21-22.

Five of the series’ six races will run as a companion to the WeatherTech Championship and Continental Tire Challenge, including the lone 2018 trip to Canada for Round 4 of the season at Canadian Tire Motorsport Park in Bowmanville, Ontario, July 6-8. VIRginia International Raceway in Alton, Virginia, will host the penultimate round of the season the weekend of Aug. 17-19, followed by the season finale as part of Motul Petit Le Mans festivities at Road Atlanta in Braselton, Georgia, Oct. 10-12.

2018 IMSA Prototype Challenge Presented by Mazda Schedule
All Events Will Be 1-Hour, 45-Minutes in Length