The “46th International Suzuka 1000km”, Round 6 of the 2017 AUTOBACS SUPER GT series was held at the Suzuka Circuit (one lap 5.807 km x 171 laps, two laps less than planned) in Mie Prefecture on August 27. This year’s race was the last ever as the SUZUKA 1,000 km. The winner of the GT500 class race was the No. 64 Epson Modulo NSX-GT driven by Kosuke Matsuura and Bertrand Baguette, bringing the team its first SUPER GT victory since 2007. In the GT300 class race, the winner was the No. 65 LEON CVSTOS AMG driven by Haruki Kurosawa and Naoya Gamou. 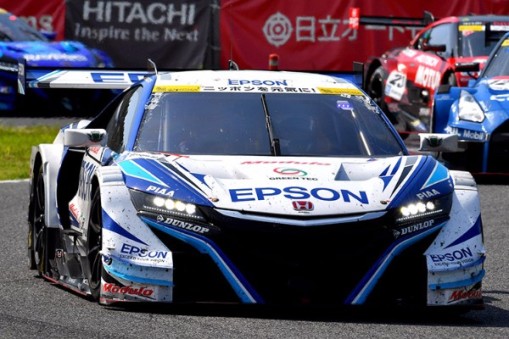 Under clear skies, a large gallery of 45,000 fans turned out to see the last SUZUKA 1000km race. After a parade run led by four motorcycles and three patrol cars of the Mie Prefectural Police, and one formation lap, the race got underway. Leading in the early stages of the race was the No. 24 Forum Engineering ADVAN GT-R (Joao Paulo Lima de Oliveira) before it was overtaken early on by the No. 17 KEIHIN NSX-GT (Koudai Tsukakoshi). And following them came the No. 19 WedsSport ADVAN LC500 (Yuhi Sekiguchi) and the No. 64 Epson Modulo NSX-GT (Baguette). According to the race regulation, each team had to make five routine pit stops during the 1,000 km race 1000km, with the stops made at intervals of about 30 laps. Along the way there was a crash by the winner of the last round’s GT300 race, the No. 55 ARTA BMW M6 GT3 (Shinichi Takagi) after being hit by another car at the final turn of the 42nd lap, and on the 95th lap the No. 31 TOYOTA PRIUS apr GT (Koki Saga) crashed on the 130R curve. These accidents brought out the Safety Car twice to control the race, but through it all, the No. 17 KEIHIN NSX-GT continued to run at a steady pace at the front. Following No. 17 was the No. 64 Epson Modulo NSX-GT, which had also been running at a good pace from the early stages of the race.

The battle for the lead was narrowed down to these two Honda NSX-GT machines, until a dramatic turn of events came with just one pit stop remaining in the race. On the Spoon Curve of the 147th lap, the No. 17 KEIHIN NSX-GT (Tsukakoshi) that was gaining on the No. 64 Epson Modulo NSX-GT (Baguette) running in the lead suddenly developed trouble with its left rear tire and ran off the track. The machine was badly damaged as a result. This left the No. 64 Epson Modulo NSX-GT alone in the lead, and after the last driver change at the pit stop, Kosuke Matsuura kept his concentration as the final driver and ran on in control of the race. As twilight closed in on the track, he took the checkered flag in winning style. For the NAKAJIMA RACING team led by Japan’s first regular F1 driver, team Manager Satoru Nakajima, this was their first SUPER GT win in the ten years since their last victory in the final round of the 2007 series at Fuji Speedway. For Matsuura it was his second SUPER GT win and his first since 2013, while for Baguette it was his first GT500 win. For the Honda NSX-GT, it was the second win of the season. Finishing the race in 2nd place was the No. 23 MOTUL AUTECH GT-R (Tsugio Matsuda/Ronnie Quintarelli) and 3rd place went to the No. 100 RAYBRIG NSX-GT (Naoki Yamamoto/Takuya Izawa) that had come on strong in the later stages of the race to the delight of the fans. As for the former F1 World Champion Jenson Button who had attracted a lot of attention this time, he brought the No. 16 MOTUL MUGEN NSX-GT home to a 12th-place finish along with the team’s two regular drivers, Hideki Mutoh and Daisuke Nakajima.

In the GT300 class race, the pole-sitting No. 25 VivaC 86 MC (Takamitsu Matsui/ Kenta Yamashita/Tsubasa Kondo) led the race into the latter stages only to lose to the No. 65 LEON CVSTOS AMG (Haruki Kurosawa/ Naoya Gamou), which had employed an unusual strategy of taking its first pit stop just after the first lap of the race. Finishing 2nd and 3rd were two Lamborghini Huracán GT3 machines, the No. 88 MANEPA LAMBORGHINI GT3 (Manabu Orido/Kazuki Hiramine/Kenji Yamanishi) and the No. 87 SHOP CHANNEL LAMBORGHINI GT3 (Shinya Hosokawa/Kimiya Sato/Yuya Motojima) after the No. 25 car crashed just before the checkered flag while running in 2nd place.
(Spectators: 45,000)

No.64 Epson Modulo NSX-GT
Bertrand Baguette
“About today, I just want to say how happy I am. I came to Japan and have driven for NAKAJIMA RACING for four years, and looking back about all I remember is the hard times. We are the only ones in SUPER GT (GT500 class) running on Dunlop tires and we were in charge of the tire development for them too, but it was difficult because we didn’t have any other teams to compare our test data with. But through it all, [Satoru] Nakajima always supported us and never put pressure on us, and everyone on the team and at Honda worked so hard for us. I am really grateful for what they have done. But I still can’t believe that we have won!”

Kosuke Matsuura
“It is still hard to realize that we have actually won. So many things are welling up inside me. With the ARTA team that I drove for until last year, I was never able to pay back our manager Aguri Suzuki properly for all his support. And I was not able to pay back with any real results the people at Honda who gave me the chance to compete in the Indy series as well. But now this win has given me confidence and made me feel that I can still go on racing. I am truly grateful to so many people for this moment.”

No.65 LEON CVSTOS AMG
Haruki Kurosawa
“I hear that we are now on top in the series ranking, but I am not going to let that change my determination to do my best at round 7 in Thailand and in the final round of the series. I worked together with the owner to put this team together, and we went through a lot of difficulties. But now it is great to taste victory like this. I am happy to see also how Naoya [Gamou, his young teammate] has gotten faster and faster and become a very dependable driver. I want to express my appreciation to the team and all the staff who have supported us.”

Naoya Gamou
“Today we raced with an unusual strategy, but recently the package of the AMG and Bridgestone tires has been very good, so I was confident going into the race that we could run at a good pace. Rather than feeling happy about this win, my real feeling is more one of relief that it is over. Because of the unusual strategy, I was always running alone with a feeling of competing against unseen rivals, but when we got to the final stages of the race and could finally see car No. 25 (VivaC 86 MC) ahead of me, I was able to concentrate fully.”