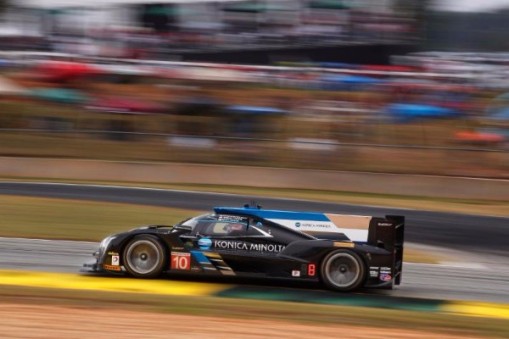 “We are happy to win the championship,” Ricky Taylor said. “The team and car have run flawlessly all year. It’s too bad to have an issue at Petit when we were fighting for the TPNAEC title. It was a crazy start to the race with the wet and then going dry. It was a lot of work at the start. The team did a great job all year, everyone at Cadillac, Dallara and our sponsors at Konica Minolta all have a hand this championship. The five wins to start the season was great and especially winning the Rolex 24 and Sebring – the stuff all drivers dream about. To win it with my dad, Jordan and Max, who is also family, is really a dream season.”

“Being with Ricky the past four years, we have been close to winning the championship,” Jordan Taylor said. “It means a lot to win it with family and Max is like family, as well. We started the year strong with five straight wins. Add the victories at Daytona and Sebring, Ricky had all of those poles, and we won Long Beach, too. Winning at Detroit is great, as well. We are a family team. The crew is very close. We were the first ones to work with the Cadillac this year. For us to win the championship with Cadillac, the ECR guys and Dallara in the first year of the DPi prototypes is special. For us to win the championship, it means a lot to everyone who developed the car, as well as our sponsor Konica Minolta.”

“We are really happy to win the drivers and team championship, as well as helping to secure the manufacturer championship for Cadillac,” Wayne Taylor said. “We had finished every single race this year. I am not really sure what happened today. We lost drive to the car and we had to withdraw from the race. That doesn’t take away from what we accomplished this year with five straight wins and taking the big ones at Daytona and Sebring. Winning in Detroit for Cadillac is always special, as is winning on the streets of Long Beach for Konica Minolta. A great accomplishment by the team, everyone at Cadillac, Dallara, ECR Engines and, of course, our sponsor Konica Minolta.”

“We had a good race going,” Ryan Hunter-Reay said. “We were focused on the Endurance Cup. I took over the car from Ricky. I was getting heat in the tires and then, on the backstraight, we all of a sudden lost drive to the rear wheels. It is amazing what the team has accomplished this year with the five wins. I joined them a little too late, but a great season for them and congratulations to everyone on the championship.”

“Winning the IMSA regular season DPi drivers, team and manufacturer titles along with the Tequila Patrón North American Endurance driver and manufacturer championships reinforces the spirit of winning that is pervasive throughout Cadillac,” said Rich Brekus, Global Director of Product Strategy for Cadillac. “It starts with our single-minded engineering group that develops award-winning road cars that are built by a quality driven manufacturing team, these accomplishments are a testament to what performance focus can achieve. Having strong team partners like Konica Minolta that won the drivers and team championships and put the car in the winner’s circle five times this year is impressive. The points earned toward the manufacturer title by the Mustang Sampling team, who were crowned Tequila Patrón North American Endurance champs today, and the Whelen Engineering group who had a great win at Canadian Tire Motorsport Park makes it a total team effort toward an incredible year of accomplishments.”

Cadillac Petit Le Mans Race Report
At the drop of the green at 11 a.m. this morning, the competitors had to battle through misty conditions on rain tires the first 20 minutes of the race before going to slick tires. As the laps and pit stops cycled through, the three Cadillac race cars progressed to the front. The No. 10 Konica Minolta Cadillac DPi-V.R made their driver change two hours into the race from Ricky Taylor to Ryan Hunter-Reay. Within a couple laps of getting behind the wheel, Hunter-Reay reported loss of drive to the rear tires. He brought he black Cadillac to the pits and the team deemed it was not repairable and retired the car.

At the five-hour mark of the race, Dane Cameron took the lead of the race in the No. 31 Whelen Engineering Cadillac, followed by the No. 5 Mustang Sampling team car driven by Albuquerque. The two Cadillac cars run by Action Express Racing were a factor at the front throughout the afternoon and evening. As darkness fell on Road Atlanta, the two remaining Cadillac DPi-V.R cars moved up and down the timing sheet in the top five.

With 35-minutes remaining, a full course caution flew and the No. 5 Mustang Sampling Cadillac made its final pit stop with Albuquerque behind the wheel running in third. He was followed into pit lane by the No. 31 Whelen Engineering Cadillac driven by Cameron running fourth. Albuquerque exited pit lane in second with Cameron in fourth. On the restart, the No. 5 Mustang Sampling Cadillac was called to pit road to serve a penalty for “unjustifiable risk.” The team kept the car out on the track as they argued the call. Meanwhile, the race leading No. 22 ESM Nissan was also penalized putting Albuquerque to the lead and Cameron in the 31 Cadillac to third. With 13-minutes remaining, Albuquerque came to pit lane to serve his stop plus 60-second penalty, which moved Cameron to second place. Another penalty was assessed on the No. 5, putting them a lap down. At the checker, it was the No. 31 Whelen Cadillac finishing second and the No. 5 Mustang Sampling Cadillac closing out the season in fifth.

The Mustang Sampling Cadillac drivers Joao Barbosa, Christian Fittipaldi and Albuquerque’s fifth-place finish on the day sealed the 2017 IMSA Tequila Patrón North American Endurance Cup driver and team championships. It is the fourth endurance championship for the team in as many years.

“Four times in a row,” exclaimed Fittipaldi. “It is a huge accomplishment and it came from a massive effort from the whole team. For the drives to make sure they keep it on the black stuff, and obviously for the team and all the preparation-it boils down to Action Express doing an awesome job. If the car doesn’t finish, we don’t get points so we would never be in this position. We had the focus to have fast and consistent cars with the Corvette and then with the Cadillac. We are happy to win this TPNAEC this year and hats off to the 10 car guys on their overall IMSA championship as well. They did a great job, particularly at the first half of the season. We will regroup and learn from our mistakes, emphasize what we did well and then come back to be even stronger in 2018.”

“It was one of our goals to win the endurance championship, as well as win the race and finish second in the drivers championship,” Barbosa said. “It is nice to get the endurance championship for the team. However, it is a shame, we were leading the race the Mustang Sampling Cadillac was running strong. We had great strategy and pit stops and then we got a stop plus 60-second penalty which we don’t really understand. That part is disappointing after the effort we had today. We could have won the race.”

“It was disappointing in the end,” Albuquerque said. “We won the TPNAEC title in the middle of the race and then we were going for the win. In the end, it was very wild. On that restart, I drove hard, we were banging wheels all the way to the last corner, mixed in with a lot of GT cars. I don’t think I drove different than any other lap. I don’t understand the penalty. In the end, we go home with the endurance championship which is good for the team.”

In the No. 31 Whelen Engineering Cadillac DPi-V.R Dane Cameron, Eric Curran and Mike Conway spent the race in the top five. The last hour of penalties and cautions propelled them to second place on the day.

“A pretty good result in the end,” Curran said. “I am really happy to finish second with my buddy Dane Cameron in our last race together [Cameron will move to the Penske team in 2018]. We had a really good Cadillac all day. Mike and I put in a lot of miles today. The team did a great job in the pits and it is good to get a result for them in what was a very competitive 10-hours of racing.”

“That was one of the toughest Petit Le Mans races I have run,” Cameron said. “The tire degradation was huge today so that made the car, at times, a handful to drive. The team made great pit stops. Mike and Eric did a great job, especially Eric who put in a lot of time behind the wheel today. Happy to take second and second in the championship is a great way to end the championship and close out the season.”

The IMSA WeatherTech Championship season ending awards banquet will take place at Chateau Elan in Braselton, Ga. on Monday evening.
The 2018 season will kick-off with the traditional Roar Before the 24 test (Jan. 5-7) at Daytona International Speedway in preparation for the Rolex 24 Hours At Daytona, Jan. 25-28.