One of the most successful chapters in Porsche’s motorsport history comes to an end next Saturday: The ninth and final round of the 2017 FIA World Endurance Championship will be the last race entry for the Porsche 919 Hybrid. The first test version of the Class 1 Le Mans prototype was rolled out by an entirely new team at Porsche’s research and development center in Weissach back in 2013. The power train concept was as innovative as it was brave, consisting of the most efficient combustion engine Porsche had ever built combined with two different energy recovery systems. Despite a difficult test period, 2014 saw the first positive results: four pole positions and the first race win. Since 2015 to date, the Porsche LMP Team has been phenomenally successful: three consecutive Le Mans outright victories plus three successive manufacturers’ world championship titles while Porsche 919 Hybrid drivers have won the drivers’ world championship title on three occasions. 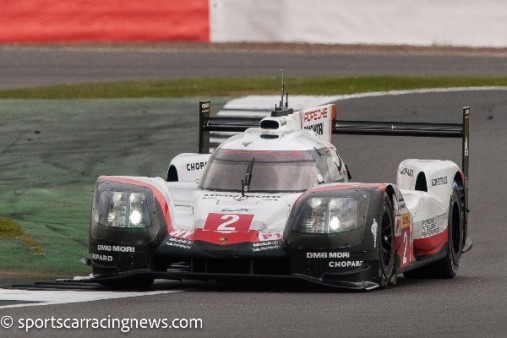 When Porsche entered the LMP1 category for the 2014 season, this happened in the footsteps of Ferry Porsche’s philosophy, who established motorsport as the ultimate challenge and development cycle. The 2014 LMP1 technical regulations presented a tremendous challenge: It required hybrid technology from manufacturers and at the same time, penalized a high amount of recovered energy by limiting the fuel consumption; on top of that it left huge individual freedom on how to deal with these complex requirements. The Porsche engineers didn’t focus on existing race cars but made full use of the chance to create a revolutionary race car from scratch.
The Porsche 919 Hybrid develops a system power of around 900 HP (662 kW) that comes from a compact two-litre turbo charged V4-cylinder (nearly 500 HP/368 kW) engine and two different energy recovery systems – brake energy from the front axle combined with exhaust energy. The combustion engine drives the rear axle while the electro motor boosts the front axle with an output of more than 400 HP (294 kW). This way the 919 accelerates with four-wheel drive and at the same time recuperates energy again from the exhaust system that otherwise would pass unused in to the atmosphere. The electrical energy that comes from the front brakes and the exhaust system is temporarily stored in a liquid-cooled lithium ion battery. Money can’t buy what Porsche has learnt from the 919 program for future road going hybrid and electric cars. Dimensions unknown before were discovered in, for example, the areas of combustion efficiency, battery and high voltage technology as well as energy recovery.

Fritz Enzinger, Vice President LMP1, remembers: “Back then we developed from zero a highly complex hybrid race car on a Formula One level. The early days were extremely demanding, especially as we had to set up the infrastructure, including new buildings, at the same time, plus assembling a team of 260 excellent people. The timing was really tight and the 2014 Le Mans race came way too early for us. But since then, we have managed maximum success. I’m incredibly proud of this team and I hope that we can conclude the era of the Porsche 919 Hybrid with a good race in Bahrain.”

In its final six-hour race, the Porsche 919 Hybrid will once again drive from daylight into the night on Saturday, November 18, in Bahrain. The race will start at 16:00 hrs local time (14:00 CET), sun set is at 16:46 hrs. Unlike at Le Mans, the drivers don’t race only in the tunnel view of the car’s headlights. 5,000 floodlights illuminate the Formula One circuit which allows for worldwide online and TV coverage until the chequered flag.

The Porsche LMP Team before the final race

Team Principal Andreas Seidl: “I feel a big relief the pressure of defending the manufacturers’ and drivers’ world championship titles is resolved before our last race. The emotions of the farewell under the stress of the title battle would have been extremely hard for the team. In Toyota this year, we are facing a competitor who developed an all new car for 2016. We, instead, kept developing our existing car. That we still won Le Mans as well as both championship titles, is thanks to outstanding driver performances, many detailed improvements and the operational strength of our team. Now we have to get ourselves together and focus on this last race. We want to leave the stage not only as world champions but also with a performance that is satisfying for all of us. Six hours of reliability and faultless work are big challenges of men and machine. Safety has the highest priority. Only after the chequered flag can we allow our reflective feelings to break through.”

Drivers Porsche 919 Hybrid car number 1:
Neel Jani (33, Switzerland): “The last race in the Porsche 919 Hybrid’s history will certainly be very special. The end of an era is the prefix for this weekend. At the same time for our car number 1 driver crew, a strong race result is the priority. We will give everything to send off the 919 nicely in to retirement. The circuit should suit us with the high downforce aerodynamic package. It’s an abrasive track for the tyres. It will probably be hot during the day but we drive into the cooler night and therefore have to manage our tyre strategy accordingly.”

André Lotterer (35, Germany): “The entire team will experience a very emotional weekend in Bahrain. I had similar feelings with Audi last year. But I think this time it will be different for the entire paddock because an era of great competition between extremely cool hybrid sports cars is ending. I will try to enjoy every second and take all the memories with me. I want to contribute with a strong performance for a nice farewell. The Bahrain track layout is not one of my favourites, but I still like driving there. The weather usually is nice in the desert. It is a challenging race for the tyres but I think the 919 is a fast, solid car and we have the potential to win there.”

Nick Tandy (33, Great Britain): “I prefer not to think about the farewell yet. The Bahrain race is very interesting anyway because we are racing from day into night. It is normally very hot for the car, the drivers and especially the tyres. It is a challenging race to finish the season at. I haven’t been there since 2015 but I was on the podium back then when I came second in the LMP2 class. So this year’s target is to make it onto the LMP1 podium.”

Drivers Porsche 919 Hybrid car number 2
Earl Bamber (27, New Zealand): “Two Le Mans wins and now the world championship – there is a lot I can thank Porsche for. It was very special for me to join the Porsche LMP1 programme back in 2015. It was one of my first ever tasks as a Porsche works driver when Fritz and Andreas and everyone in the team believed in taking a Carrera Cup driver to Le Mans. That was amazing. I was back in the GT programme in 2016 and then becoming one of the main LMP drivers has been a fantastic year in which I was learning a lot. Stopping now feels difficult because I feel every race weekend we are getting better and better and there is still a lot more performance and a lot more than we can show. The race weekend in Bahrain will be challenging and we will give it our best. It will be very, very special to see two cars in the museum forever having my name on the side. The Porsche 919 Hybrid will always bring back special memories.”

Timo Bernhard (36, Germany): “It is great that we could take both titles in Shanghai. Now we are relieved to give it a go in Bahrain and to fully enjoy our last weekend with the Porsche 919 Hybrid. In other words: we will get the maximum out of it without the pressure of the championship battle. In any case it will be a weekend full of emotions. For me, many memories from the first days of the programme pop up. These were intense experiences at the beginning. Not easy. When the last stint of the 919 is over, a lot more feelings will come up. These four – or five years if you include development – were just such cool times and I wouldn’t have wanted to miss a single moment. I’m heading very positively to Bahrain, although I know it will not be easy to suppress such thoughts during a very tough six-hour race.”

Brendon Hartley (28, New Zealand): “Going to Bahrain will be emotional for all of us. Especially as we arrive as World Champions with less pressure now. I have so many incredible memories and experiences with the 919 Hybrid, teammates, and all the boys and girls from the Porsche LMP Team. We shared something very special together. After developing the Porsche 919 for more than four years, it’s an absolute dream to drive so we will all be enjoying every last lap with this awesome machine. On one side there will be a lot of sadness, but on the other hand we will be giving everything to give this project the ultimate send off it deserves.”