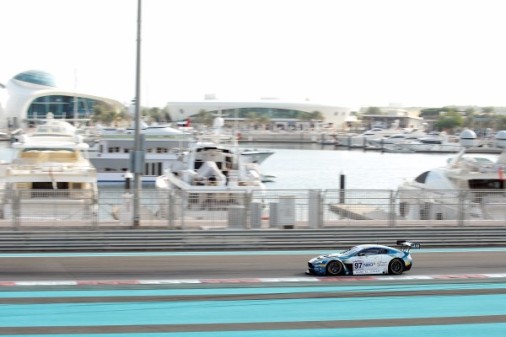 Holding both the class and overall pole positions midway through his run at the wheel of the No.97 Aston Martin V12 Vantage GT3, the Omani ended the Q1 session with an excellent third fastest time overall – behind two LMP3 class prototype cars – and retained the GT Pro-Am pole.

Britain’s Tom Jackson took over driving duties for the Q2 period and went on to lap with a time of 2m10.273 seconds, placing him fifth overall and second in class. Scotsman McKay, making his first ever appearance in Oman Racing colours, lapped Yas Marina in 2m09.900 seconds which equated to fifth in class and 12th quickest overall in session three.

With the final grid placing for the seventh edition of the Gulf 12 Hours determined from an average best of the fastest times of all three drivers, the Oman Racing entry secured the GT Pro-Am pole and fourth overall.

“I was really happy to set my fastest time of the weekend so far in my qualifying run”, said Oman Ministry of Sports Affairs, Oman Air, National Bank of Oman, Omantel, Barr Al Jissah and Amouage backed racer Al Harthy, “Taking P1 in class and P4 overall is a great result, we’re all very happy to begin the race from the second row and everything is looking positive.

“It’s going to be a long race, the second longest of the year for Oman Racing, so we just need to keep our focus and discipline, make sure we don’t make any mistakes and be cautious of the LMP3 cars as we don’t need to get caught up in any unnecessary battles. Tom and Euan have done a great job so far, Euan has fitted in very well with the team and I think his performance so far shows that.”

The annual Gulf 12 Hours race at Yas Marina Circuit in Abu Dhabi will get underway at 09.00 (local time) this morning, Saturday, 16th December, with the first six hours of competition ending at 15.00 (local time). Following a break of around two and a half hours from track action, the teams and drivers will get ready for the start of the second six hours at around 17.45 (local time).

Live streaming of the race will be available online HERE