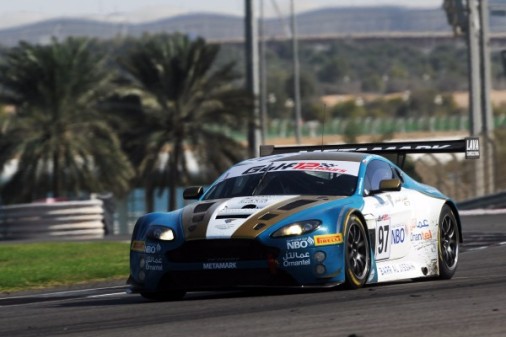 Partnered by British duo Tom Jackson and Euan McKay, Omani sensation Al Harthy produced an outstanding performance throughout the seventh edition of the endurance racing spectacular and the trio ended the contest little more than 12 seconds shy of the GT Pro-Am victory.

Somewhat frustratingly, Oman Racing looked well on course to claim a deserved class win but an unfortunate issue with the exhaust mid-race, a legacy of contact with a kerb, resulted in a costly loss of almost nine minutes in the pits and prevented what would have been a dream result.

Even so, second position in GT Pro-Am marked a fantastic finish for the team and also marked the seventh time from eight races this year Muscat racer Al Harthy has lifted podium silverware – four times in the Blancpain Endurance Cup, twice in the Michelin Le Mans Cup and, this weekend, in the Gulf 12 Hours.

“It’s great to end the year with another podium, second in class in the Gulf 12 Hours is fantastic and a very positive way for us to end 2018”, said a delighted Al Harthy, “We showed strong speed all weekend, Tom and Euan did a great job and the team, as ever, gave us an incredible car. To have led the race overall, and been on course to win the class, shows what a great team effort it was.

“To end the season like this, on the podium at such a big race so close to Oman, is amazing and everyone who came to support us had a great time. We’re all incredibly happy and this is another positive for Oman Racing, our seventh podium of the year in total, to build on as we look to 2018.”

Having qualified on class pole position, fourth on the overall grid, the opening six-hour portion of the race started well for Oman Racing with Al Harthy beginning the encounter and maintaining the lead in GT Pro-Am.

Driving beautifully, the Omani pitted to hand over to McKay with around 75 minutes of racing complete and the Scotsman continued the great work by holding the class lead and closing down the overall race leader, the Aston Martin moving through into outright second position.

With almost two hours completed, McKay grabbed the overall lead – passing the No.11 Kessel Racing Ferrari – and he proceeded to open an advantage of roughly 12 seconds before pitting to hand over to Jackson for his first stint.

Running in the class lead and second overall, Jackson ended his first run just over half a minute to the good before Al Harthy got back behind the wheel. As a result of barrier repairs, a lengthy Safety Car period in the fifth hour meant the team opted to pit with just over an hour to go and Jackson climbed back aboard the No.97 Aston.

Going on to end the first six hours with the class lead and in third place overall, after a break of around two and a half hours racing resumed at 17.45 local time. Al Harthy started once again and immediately set about challenging the cars ahead, before settling into third overall and holding the GT Pro-Am lead.

Performing well, the Oman Ministry of Sports Affairs, Oman Air, National Bank of Oman, Omantel, Barr Al Jissah and Amouage supported racer handed over to McKay at the first pit-stop and the latter again impressed as he moved up into the outright lead before the end of hour two – despite the onset of some light rain at Yas Marina.

Opening a cushion of around half a minute, McKay’s stint was then compromised when contact with a kerb bent the exhaust and led to some cooling problems for the gearbox, ultimately costing the squad around nine minutes in the pits.

When the car reappeared Al Harthy was back behind the wheel and held third in class and 10th overall. Reeling in the competition ahead and recovering a lot of time, Al Harthy charged through before Jackson took over with around two hours to go. Moving back into the GT Pro-Am lead before the final stop, where McKay took over, the team ended the race a deserved second in class.

“I have to say a huge thank you to all involved for a fantastic weekend, from the guys in the team to the supporters from Oman and our incredible sponsors”, added Al Harthy, “It really has been such a strong year for Oman Racing, our best ever, and this podium in the Gulf 12 Hours is a great way to cap our 10th anniversary season.”