The first winners of the Lamborghini Super Trofeo Middle East 2018 are Riccardo Agostini and Rik Breukers, who have won Race 1 at Abu Dhabi on the Yas Marina Circuit. Both drivers belong to the youth programs of Lamborghini Squadra Corse and this win was scored by the two young talents just a few weeks away from other important successes: Agostini was crowned North American and World champion of the Super Trofeo 2017; Breukers, instead, won last January’s Daytona 24h with the Huracán GT3 of the team Grasser. 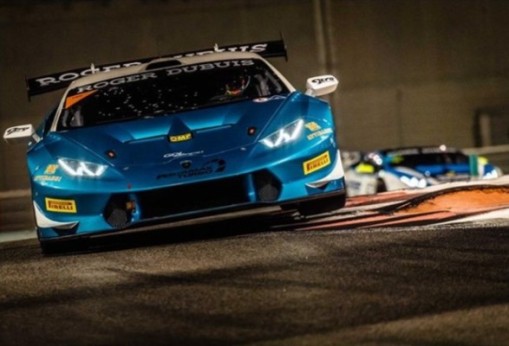 After starting from the third position with Agostini at the wheel,the Lamborghini # 7 of the team GDL Racing maintained its position during the first part of the race, behind Christopher Zoechling (# 77 GDL Racing) and the poleman Axcil Jefferies (# 11 Konrad Motorsport). Then, the trio went on at a qualifying pace until the opening of the pit-stop window and Axcil Jefferies scored the best lap time of the race with 2’09”731.

After the driver change, however, things began to mix up: the Huracán # 11, whose wheel had been handed from Axcil Jefferies to Carrie Schreiner, continued leading the race followed by the car #77 of GDL Racing with Breukers, who had taken over the wheel from Agostini. The car # 77, which had been handed from Zoechilng to Taheri, was instead inflicted a drive-thru (for crossing the white line at the pit exit) and lost several positions.

In this context, the Huracán # 5 of FFF Racing (with Aidan Read and Jack Bartholomew at the wheel) climbed up to the second position behind Breukers, who in the meantime, 15 minutes from the end, had reached Carrie Schreiner and taken the first position.

During the last lap, Breukers (# 7 GDL Racing) was leading the race followed respectively by Bartholomew (# 5 FFF Racing) andSchrenier (#11 Konrad Motorsport), but a fight between the latter two led Schreiner to conquer the second place overall (and the first place in the Pro-Am category) and Bartholomew to miss the podium in favor of the duo formed by Jasper and Webb (# 26 Leipert Motorsport), who had meanwhile climbed the rankings.

In the Pro-Am category, it is worth mentioning the third place scored by the debuting crew of Antonelli Motorsport formed by Glauco Solieri and the seventeen-year-old Giacomo Altoè.

In the AM class, the victory was taken by the American Taylor Proto of FFF Racing Team # 55, who is at his first experience in the Middle East series but scored excellent lap times that enabled him to win in his category and get an excellent fifth place overall.

In the Lamborghini Cup, the victory was conquered by another car of the team FFF Racing and namely # 15, with Mark Proto (Taylor’s father) and Conrad Grunewald behind the wheel.