The two practice sessions ahead of rounds three and four at Donington Park set the scene for what promises to be a closely contested qualifying session. Dino Zamparelli (Redline Racing) and Tom Wrigley (JTR) both posted times underneath the lap record – just two-tenths of a second covered the top three cars in both sessions. 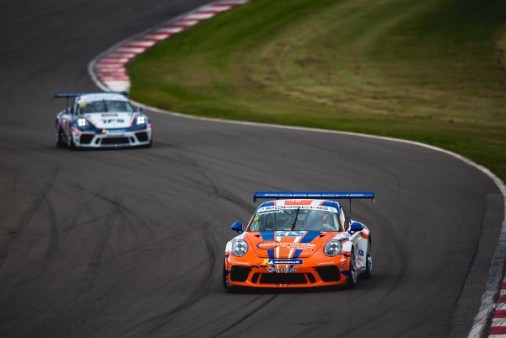 In the Pro category, 17-year-old Porsche GB 2018 / 2019 Junior Dan Harper (JTR) traded times with his team mate Wrigley. The pair were separated by less than a tenth of a second in both practice sessions leaving Harper third behind Wrigley. Amongst the fastest in both sessions was round one podium finisher Lewis Plato (JTR) who ended the day fourth in the combined classification.

Jamie Orton (JTR) was the pacesetting driver in the Pro-Am category, putting his car amongst the Pro category runners in both sessions. Orton was chased by Dan Vaughan (Motorbase Performance) and Seb Perez in FP1, Rory Collingbourne (Welch Motorsport) and Esmee Hawkey (GT Marques) in FP2, establishing a close category battle.

Of the Am drivers Peter Kyle-Henney (IN2 Racing) set the benchmark time in both practice sessions, but in newcomer Dave Shaw (G-Cat Racing) he has found a fresh rival. In his first Carrera Cup GB outing Shaw was just four-tenths of a second adrift of Kyle-Henney, with Peter Mangion (Team Parker Racing) finishing a close third in the combined times.

Shaw was not the only Rookie newcomer at Donington Park. In addition Pro category driver Will Bratt (IN2 Racing) joins the series alongside Steve Gales (Welch Motorsport), both made efficient progress ahead of Saturday’s qualifying session.

·       At 10:54 the red flag is shown while the spinning car of Rookie Steve Gales (Welch Motorsport) recovers

·       In Am Peter Mangion (Team Parker Racing) improves and sits just +0.075 behind Kyle-Henney before Dave Shaw (G-Cat Racing) splits them

·       Vaughan closes on pacesetting Orton who ends the session fastest in Pro-Am – Vaughan is just 0.088 behind

·       George Gamble (Amigos Team Parker) was the first Pro driver out, Perez (Pro-Am) and Mangion (Am)

·       With just over 15 minutes of FP2 remaining, the green flag is shown, all cars except Hawken and Ellinas return to the track

Qualifying for round three will take place on Saturday between 11.55 and 12.25, with drivers fighting for the two points awarded in 2018 for the fastest time posted in each category over the course of the session. Follow the battle on Twitter via @CarreraCupGB.

« AUDI DRIVER FILIP SALAQUARDA: “MOST IS GOING TO BE A GREAT WEEKEND”
MS&AD ANDRETTI FORMULA E AIMING TO BOUNCE BACK INTO THE POINTS POSITIONS IN THE STREETS OF PARIS »