Giacomo Altoè, age 17 and new member of the Young Drivers Program of Lamborghini Squadra Corse, has taken his second victory and the first of the season conquered together with Daniel Zampieri. This was the verdict of Race 2 at Silverstone, which hosted the second round of the Lamborghini Super Trofeo Europe. Thanks to this success, Altoé confirmed his leading position in the PRO standings with the Antonelli Motorsport team, which also celebrated the third consecutive victory of the duo formed by Juan Perez and Loris Spinelli, who are now at the top of the PRO-AM ranking. In the AM, Andrej Lewandowski and his new co-driver August MacBeth repeated the success obtained in Race 1 on Saturday and the Poleman of VS Racing managed to confirm his leading position in the AM standings. The 2017 champion, Gerard Van der Horst, scored his first victory of the season and is now leading the standings in the Lamborghini Cup. 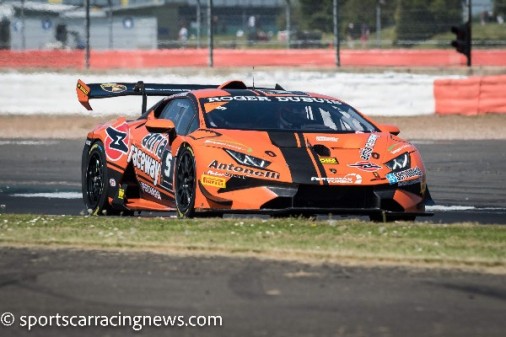 While Dennis Lind (Target Racing) took the lead at the start, he was then penalized with a drive-through for anticipating the start, after he had overtaken both the poleman Edoardo Liberati (VS Racing) and Axcil Jefferies, who had taken the second position with the car of Konrad Motorsport. The final laps, however, proved to be decisive. Gerhard Tweraser, who had taken over the wheel from Jefferies, took the lead after the pit stops. After getting into Liberati’s car, Hans-Peter Koller began to lose positions, while Altoé, thanks to the excellent first “stint” done by his co-driver Zampieri, entered the track in third position and then moved up second.

A bit over two minutes before the end of the time, the young Italian overtook Tweraser, then he managed the traffic generated by the lapped drivers and did a sprint finish ahead of the Austrian. James Pull and Kelvin Snoeks (Bonaldi Motorsport) did another excellent race and after the two second places taken at Monza, they returned to the podium. Karol Basz and Vito Postiglione scored a fourth-place finish and important points, after taking their second win with Imperiale Racing in Race 1 on Saturday.

The race had an exciting finish also in the PRO-AM, in which Loris Spinelli, who had taken over the wheel from Perez, did an amazing recovery and managed to finish fifth, after overtaking Koller in the final laps. The latter driver, instead, concluded second in the same class together with Liberati. Francesca Linossi and Stefano Colombo also took to the podium, after racing with one of the two cars of Iron Lynx Motorsport Lab.

In the AM, the conduct of Lewandowski and MacBeth was linear and the American managed to keep Raffaele Giannoni at a distance in the final laps. The driver of Automobile Tricolore also returned to the podium after the two wins scored on his home track one month ago. The third place went to the German crew of Dörr Motorsport formed by Manuel Lauck and Florian Scholze.

Four races and four different winners in the Lamborghini Cup: if at Monza the victory went to Supachai Weeraborwornpong (Team Lazarus) and William Van Deyzen (Van der Horst Motorsport), in England the wins were shared by Joseph Collado (AGS Events) and Gerard Van der Horst, who finished ahead of Collado and his teammate Van Deyzen in Race 2.

Now, we will have to wait a bit over one month, when the Lamborghini Super Trofeo Europe will return to Italy for the third round that will take place at Misano on the weekend of June 23-24.

DRIVERS’ QUOTES
Giacomo Altoè/Antonelli Motorsport (1st overall and PRO): “I’d like to thank my teammate Zampieri, who helped me a lot throughout the weekend to get the most out of such a difficult track as the Silverstone one, which I’d never seen before. Race 2 was fantastic; on the penultimate lap I managed to take advantage of a small mistake made by Tweraser and took the lead. I think it was a well-deserved victory”.

Juan Perez/Antonelli Motorsport (1st PRO-AM): “This weekend was fantastic and difficult at the same time. It was also my first time here at Silverstone and the level of our class is very high. We all did a great job and in the end, this was an extraordinary result for us and for the team”.

August MacBeth/VS Racing (1st AM): “I’m really happy. Debuting with two victories was extraordinary. I wish to thank the whole team and my teammate Lewandowski”.

Gerard Van der Horst/Van der Horst Motorsport (1st Lamborghini Cup): ” I think this was the best race I’ve competed in in the last two years, even though it was really tough also because of the heat, with Collado getting very close in the last corners”.