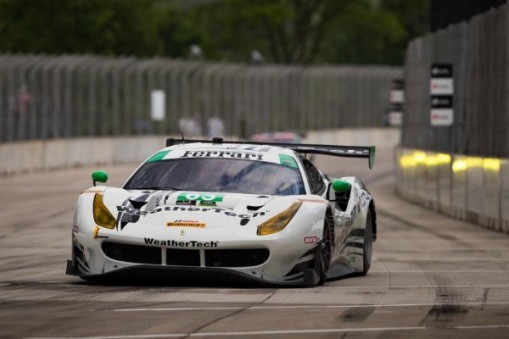 MacNeil had the wheel of the No. 63 WeatherTech Ferrari for the start of the 100-minute race on Detroit’s Belle Isle circuit. At the drop of the green he was able to meticulously drive the white-and-black Ferrari through the concrete lined 2.3-mile, 14-turn island street circuit and move up to fourth when he handed the controls to Segal. The veteran Ferrari driver was embroiled in a three-car battle but was able to keep the WeatherTech car in the top five and brought it to the checkered flag without a scratch.

“Decent finish for us today in Detroit,” MacNeil said. “It is also a good points day. The car is in one piece and that is good. Jeff had a strong finish for us to bring it home in fifth. I just picked my spots during the race and wanted to make sure I delivered Jeff a good car with all four wheels pointing in the same direction. I wanted to have a clean run and make up some positions and that is what I did.”

“Fifth place is pretty good here,” Segal said. “It is very difficult to pass here, Cooper did a great job to get up in the top five. To improve two positions from qualifying is a good result for the weekend. The Scuderia Corsa guys did a great job easing my transition back into the car. Alessandro (Balzan), I know wants to be driving, but he was vital to the performance of the team this weekend.”

The duo are leaving for the airport to take a flight over to France for the official practice of the 24 Hours of Le Mans where they are joined in the No. 84 JMW/WeatherTech Ferrari by Brit Liam Griffin.

The IMSA WeatherTech SportsCar Championship will take a little break for Le Mans and return to action at Watkins Glen, June 29 – July 1.