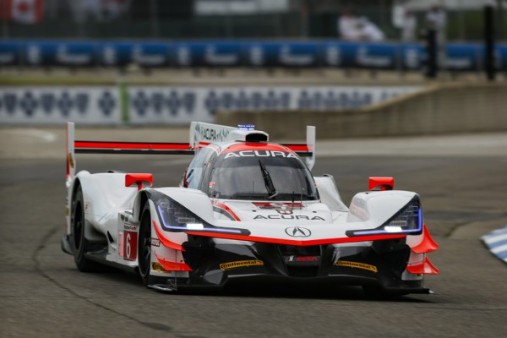 Juan Pablo Montoya qualified the No. 6 Acura ARX-06 DPi in the second position on Friday afternoon, just missing his second pole position of the season.
Montoya wasted little time in moving into the lead, taking the top spot on the second lap of the race.
Once he propelled into the lead, Montoya stretched his lead to over two seconds before a caution flag flew on lap 12.
Race strategist Kyle Moyer called Montoya to pit road where the team swapped drivers to former Detroit Grand Prix winner, Dane Cameron, while applying new tires and fuel.
When the race restarted, Cameron had to slow to miss a spinning competitor, resulting in the loss of several positions. However, he was able to make them up with a strong, three-wide more into the third turn on the next lap to move up to ninth.
Cameron made the team’s final pit stop of the day on lap 43 for fuel only, meaning he would take the same tires to the finish of the 100-minute race.
The race resumed with Cameron in the second position, just behind teammate Ricky Taylor. The Acura Team Penske duo tried mightily to get to the leader but the laps ran out before either could make a move.
The finish is the second-consecutive podium result for the No. 6 ARX-05 DPI, moving Cameron and Montoya into the fifth spot in the IMSA WeatherTech SportsCar Championship point standings.

“It was definitely a solid points day for the No. 6 Acura team. To get another podium means that we are finding consistency as we move into the second half of the season, which is great. We did a double stint on tires to finish the race and I just didn’t have anything left there at the end to really push Ricky and Eric for the win. I thought Juan did a great job early on to get us the lead and really opened it up there at one point, so we have a lot to build on for these street courses.”

· Helio Castroneves place the No. 7 Acura ARX-05 DPi in the third starting position during the Friday afternoon time trials after being slowed by another competitor on his final qualifying lap.

· The former Detroit Grand Prix winner quickly moved into the second position on lap 2 as he and teammate, Juan Pablo Montoya, were able to make their way around the pole winner.

· A lap 12 caution period brought Castroneves down pit road where he relinquished the seat to Ricky Taylor while the team changed all four tires and filled the Acura up with fuel.

· Taylor would cycle to the lead as those that chose not to pit under the lap 12 caution period, with Dane Cameron just behind.

· Despite an understeer condition, Taylor would hold the top spot until making his final pit stop of the day on lap 43.

· As the green-flag pit stops cycled through, Taylor found himself in the second position, but several seconds behind eventual race winner, Eric Curran.

· Throughout the final run of the race, Taylor pushed his Acura as hard as possible, eventually resulting in the rear tires degrading before he could make his way back to the lead.

· The finish marked the second-consecutive podium for the team following their win at Mid-Ohio in May. It also vaults them into the third position in the IMSA WeatherTech SportsCar Championship standings.

“We really wanted to get another win for Acura Team Penske at Roger’s (Penske) home track and a place he puts so much time and energy into. The 31 car was really strong at the end, but we thought he may be close on fuel so we pushed as hard as possible to make him run hard as well. We just used up our rear tires too much in the process and he was able to make it to the end. Still it was a strong day for both Acura teams. I think the speed we have shown lately will give us a lot of confidence as we get to Watkins Glen and Canada.”