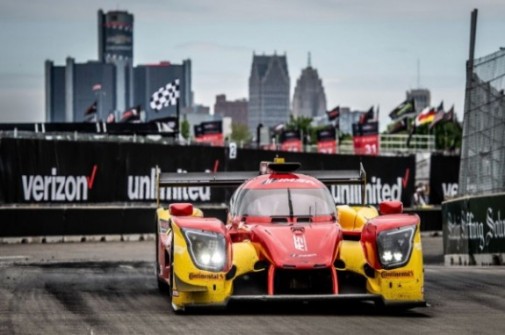 What started as a shaky weekend ended up on a positive note thanks to all the hard work from the AFS/PR1 Mathiasen Motorsports team and drivers. Qualifying was smoother than the prior practice sessions, but the #52 still found itself starting back in 13th place on the grid. The crew of AFS/PR1 Mathiasen Motorsports worked overnight from qualifying to race day to make the car better for Sebastian Saavedra, who spent his birthday starting the race. Saavedra felt the improvement in the car immediately and gained several positions on the start.

Finding more of the pace and running off a good pit strategy, Saavedra ran all the way up to 4th place and was holding his spot amongst the competitive field. Time was lost when the drivers swapped over and found trouble getting a safety belt to cooperate. Gustavo Yacaman was pushed down to 10th as he made his way into the race, but that didn’t get in the way of AFS/PR1 Mathiasen Motorsports finding a way to gain some of those positions back. Knowing they were good on fuel for the remainder of the race, the engineers of AFS/PR1 Mathiasen Motorsports advised Yacaman to push the drivers ahead of him who had not pitted for extra fuel in the hopes they would exhaust their supply. Their efforts paid off and Yacaman was able to push himself into 8th place before crossing the finish line.

Next up for AFS/PR1 Mathiasen Motorsports is the Sahlen’s Six Hours of The Glenn at Watkins Glenn International. Roberto Gonzalez will rejoin Gustavo Yacaman and Sebastian Saavedra to fight for their first podium of the season on Sunday, July 1st.

“We say goodbye to the streets of Detroit with a very positive 8th place finish. The weekend started with a car that was not very compatible with a street circuit, but we kept working at it together with my teammate, Gustavo, and Tim, my engineer. We found a path that we all followed together throughout the race weekend. We had a good start where we gained some positions and a great strategy from Bobby Oergel that got us ahead with fuel and put us in a good battle for the top positions.Unfortunately, a slow pit stop put us behind a little bit, but Gustavo ended really strong and earned us some important points for the Championship. We are focused on what is to come in Watkins Glen, which should be a more competitive event for us.”

“It was a very tough weekend, which we kind of expected it to be. We lacked pace the whole weekend. We never quite figured the car out even though we made some improvements. We went from being three or four seconds off the pace to being around one or one and a half seconds off the pace. That leaves everything on a positive note and we have to remember that we are working really well as a team. Tim, our engineer has been learning more and more about the car and I think he feels pretty comfortable working around it, which will help us moving forward. The next couple of tracks should go well with the Liger so, for now, we will hope for the best and keep working.”

“We struggled most the weekend with our Ligier chassis, trying everything that we could possible to throw at the car since we didn’t have the speed at first which was disappointing especially after being the quickest LMP2 at Mid-Ohio. With the efforts of Tim Lewis, our great engineer and Sebastian’s and Gustavo’s feedback, we went for radical car changes that have not been tried by our team. We had a decent race car obtaining another top ten finish with an eighth place finish and again the best finish for an LMP2 car. The team is looking forward to WatkinsGlen, a true road course where our car should be pretty quick.”

“I’m very proud of the work of the AFS/PR1 Mathiasen team. It was a difficult start to the weekend for us but everyone kept their cool and focused on improving the car and by the time we got to the race we were able to be in the fight once again. We’ve had almost no testing this season so we are definitely at a disadvantage but we’ve managed to show how strong we can be regardless.  Last year we were the fastest car at Watkins Glen so we are definitely looking forward to going back there and fighting for a podium!”