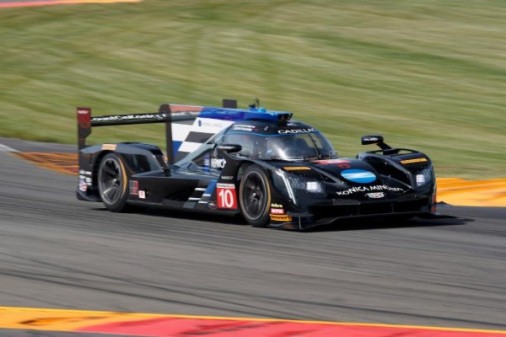 The teams made a quick turnaround after Sunday’s Watkins Glen race to get back on the track in just five days at the track formerly known as Mosport. The 2.4-mile, 10-turn circuit that maintains the same basic layout as when Formula 1 last ran there in 1977. The undulating natural terrain road course is a favorite among drivers for its challenging fast turns and long back straight.

The Mustang Sampling Cadillac team comes into round seven of the championship leading the Prototype driver points with Filip Albuquerque on top alone, as a result of teammate Joao Barbosa missing the Watkins Glen round due to injury. Albuquerque has 169 points, just one point ahead of garage mates Eric Curran and Felipe Nasr in the Whelen Engineering Cadillac. Konica Minolta Cadillac drivers Jordan Taylor and Renger Van Der Zande are in fourth with 156 points. The Wayne Taylor led Konica Minolta Cadillac defending championship team is still seeking their first win of the 2018 season.

“Mosport is the fastest track we go to,” Jordan Taylor said. “It’s a very high-speed circuit with long flowing corners. There are only two corners where you actually have a decently hard brake zone. The rest is all extremely fast. It’s got a lot of history. It’s been a traditional road course on the sports car racing calendar for years, so it’s nice that we’re able to go there. I think it will be a tough fight in the (Prototype) class, especially having so many cars on such a short, but fast track. You really have to get into a good rhythm to get the lap time, so traffic can really disrupt your flow. We’ve had a strong car there every year, so I’m hoping we can capitalize on that, but things are obviously much different this year. Pace-wise, we weren’t really a factor at the last few races, so we need to focus on what we can control and that is trying to stay in touch with the leaders with our pit stops and our strategy and run a trouble-free race like we did last week at Watkins Glen, but this time I hope it’s enough that we can actually compete with the leaders at the end.”

Filipe Albuquerque, who will run CTMP for the first time, is ready to take on another new North American circuit. The Mustang Sampling Cadillac team leads the championship and is motivated to stay at the top of the points standings.

“It’s a new place for me but it looks like a classic, old school track which is the type of circuit that I really like,” Albuquerque said. “I have been studying in-car video and are as ready as I can be in our preparation. We will just have to see how we are when we get there. When we do the track walk the guys will help me and give me more specific tips. I have seen the previous races, so it will be a new experience going there other than just watching.”

The No. 31 Whelen Engineering Cadillac DPi-V.R team comes to CTMP as the races defending winners. Eric Curran and Felipe Nasr are poised to repeat on Sunday.

“CTMP is a great track to drive,” Curran said. “We battled with the chassis and the handling but our Whelen Cadillac was a great car there last year. We are much further down the road with learning the car now. Hopefully we can show up and be better and faster off the truck than last year. We were in contention and the way strategy worked out we walked away with the win. It’s a fun track and Felipe (Nasr) has never been there, but he will be ready to pick up the track quickly. We will keep chugging along and hope we have the speed and horsepower to use that fast track and be strong. It’ll be fun and I hope we can match our result from last year!”