WEC PODIUM FINISH FOR THE FORD GT AT SILVERSTONE

The Ford Chip Ganassi Racing team had a gruelling six hours of racing at Silverstone today, finishing in third and seventh places. 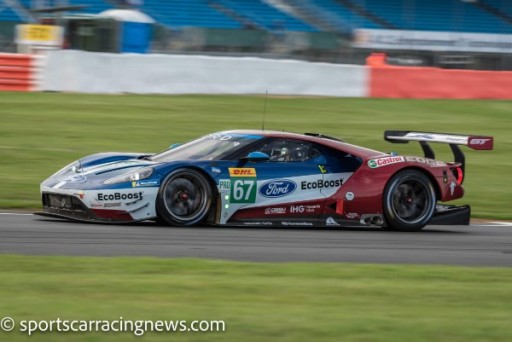 Despite fighting back from a chaotic start to first and second place in the early stages of the race, the #67 Ford GT of Andy Priaulx and Harry Tincknell had to fight back all over again in the latter half of the race. They recovered to third place, taking their first podium finish of the season.

The #66 Ford GT of Stefan Mücke and Olivier Pla finished in seventh place after an exhausting six hours where they struggled with high cockpit temperatures and a problematic pit stop, eventually finishing in seventh place.

“We’re very disappointed,” said team principal George Howard-Chappell. “We had good speed in the cars so compared with what we could have done it hasn’t been the best day. We were really unlucky with the strategy choice for the #67 car, losing out under the full course yellow, which immediately followed the safety car. It was a good call to stop when we did but it didn’t work out for us, although we managed to salvage a podium. We then had an unreliability issue on the #66.  It has hurt those guys in the championship and that is a real shame.”

Pla started the race from pole position in the #66 GT, with Priaulx not far behind in the #67 GT in fourth place but chaos reigned at the first corner when two LMP1 cars spun, scattering the chasing pack. This left Priaulx back in sixth place and Pla all the way back in 10th.

The fightback was soon underway with Priaulx and Pla on maximum attack as they made their way back up the order and after 1.5 hours of racing the two Ford GTs were in first and second place!

Unfortunately it wasn’t to last as a full course yellow came at just the wrong moment for the Fords.  The situation worsened at the next stop at the halfway mark of the race when there was a problem with the door of the #66 GT, which lost it a chunk of time.

The second fightback was on and the fans at Silverstone were treated to some thrilling GT action as the Ford GTs were involved in some entertaining door-to-door battles.

“I really enjoyed the first two stints,” said Priaulx, after his return from the podium. “I took the lead and had a nice cushion there but it’s a long race and we had a safety car and full course yellow that really hurt us at the wrong time. We went slightly out of sequence with the stops, which at the time was the right choice but with the full course yellow it really put us back. We’re always happy to be on the podium but we’re a bit disappointed that we didn’t get the win that we probably deserved.”

“It’s a disappointing result for us, considering that we started from pole position,” said Mücke. “Olivier was unlucky at the start as he had to avoid the chain reaction from the LMP1 accident and this put us right to the back of our class. He did an amazing job, overtaking a lot of cars before I jumped in and continued his work, taking us up to second. We were then unlucky with a full course yellow so a Ferrari got ahead of us but we were able to close the gap to the leader and it was all looking good.

“Unfortunately the issue we had with the door in the pits put us down a lap and you can’t come back from that. It’s a shame as the car felt so good this weekend and we’ve given away some very important championship points. We’re still in the game though. This is a long season with five more races and we are still fighting for the championship.”