Zandvoort played host to the final race of the GT4 Central European Cup in 2018. With little separating the championship contenders in both the Pro-AM Cup and Am Cup classes, both title battles remained tense right up to the final lap. 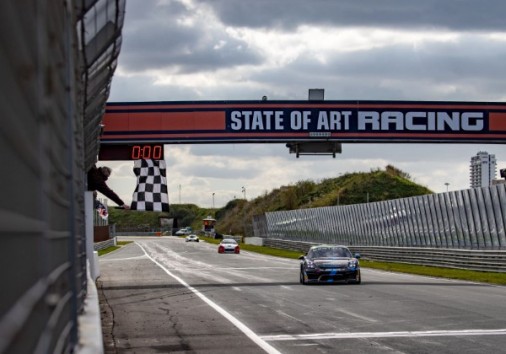 “We did it!” said Rob Severs (#43 Allied Racing), who was in celebratory mood after his race victory together with teammate Nicolas Schöll. Rob Severs had travelled to Zandvoort in third position in the championship, but put together an excellent race weekend at his home circuit to take the title. Severs followed up his victory on Saturday with another win in Sunday’s race, giving the Dutchman enough points to secure the championship. The local driver was helped to championship success by teammate Nicolas Schöll, who qualified their Porsche Cayman GT4 CS MR on pole on Saturday.

Finishing in second behind the newly crowed Pro-AM Cup champions were Antoni Chodzen and Patrick Zamparini (#50 Scuderia Villorba Corse). Thanks to this result from the Polish/Italian driver pairing, Scuderia Villorba Corse secured the teams’ classification. Third place went to Belgian drivers Nicolas Vandierendonck and Bas Schouten (#30 SRT Selleslagh Racing), who were making a guest appearance at Zandvoort this weekend and secured their second podium in two races.

Polesitters Lenny Marioneck and Marylin Niederhauser (#26 Reiter Engineering) just missed out on a podium finish down in fourth position. the championship, Niederhauser ultimately finished second behind Rob Severs. Her KTM teammates Benjamin Mazatis and Ilmari Korpivaara (#25 Reiter Engineering) finished in third position in the championship despite a serious accident in the final race.

Victory for Freddy Fast in the Am Cup

Mercedes driver Freddy Fast (#48 Lechner Racing) took the victory in the hard-fought Am Cup class after an exciting hour of wheel-to-wheel racing. Fast also secured third place in the Am Cup championship with the win. He was closely followed by the previous day’s victory, Maciej Marcinkiewicz (#7 eSky WP Racing Team), in second position. This second-place finish not only gave the Pole another podium finish, it also saw him wrap up the Am Cup title.

Marcinkiewicz’s closest rivals in the championship battle, Romy Dall’Antonia and Giuseppe Fascicolo (#77 Scuderia Villorba Corse), crossed the finishing line in fourth position and finished runners-up in the Am Cup class. Third place in the final race of the season went to Porsche drivers Jan Kasperlik and Jörg Viebahn (#41 Allied Racing).

Tight finish in the teams’ championship

Rob Severs, #43 Allied Racing: “It was an unbelievable race for me. I knew that I would have to win both races if I wanted to win the title. To do so at my home circuit is a dream come true. My team has worked unbelievably hard and I would like to thank each and every one of them for making this possible.”

Antoni Chodzen, #50 Scuderia Villorba Corse: “Today’s race was full of highs and lows for me. We made a poor start and I was also handed a drive-through penalty for an infringement on the start/finish straight. Then, thanks to the safety car period, we were able to close up to the rest of the field and fight our way through to second position. My teammate Patrick did a fantastic job!”

Benjamin Mazatis, #25 Reiter Engineering: “We had a good start and were able to hold our position, which was by no means an easy task. Unfortunately another car pushed us into the wall in turn three, which put us all the way to the back of the field. My teammate Ilmari did a great job fighting his way back through the field, and was able to hand over the car to me in a good position. Unfortunately, damage linked to the original contact put us into the wall again. The boys in the pits did a fantastic job to get us back out there on the track and help us cross the finishing line. It’s a shame they weren’t rewarded more for their efforts. We had a great season but have come away empty handed.”