Lexus and 3GT Racing will compete in the IMSA season-finale Petit Le Mans 10-hour race at Road Atlanta on Saturday. Lexus is currently tied for third in the IMSA WeatherTech SportsCar Championship GTD manufacturer standings with one race remaining on the 2018 schedule. 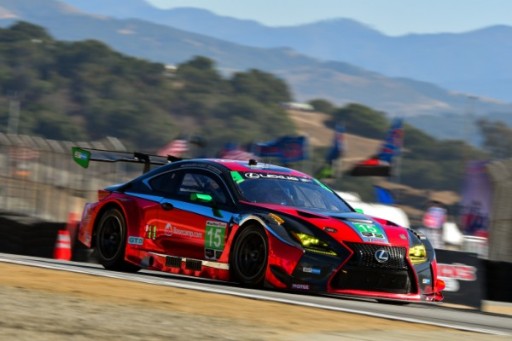 The No. 15 Lexus RC F GT3 heads into the 10-hour endurance event having finished within the top-10 in all three endurance races this year with full-time drivers Jack Hawksworth and David Heinemeier Hansson. They opened up the season in January at the Rolex 24 at Daytona with a ninth-place finish, went on to register a fifth-place result at the Twelve Hours of Sebring in March, and finished a season-best of fourth at the six-hour event at Watkins Glen International in July. Last season, the No. 15 Lexus finished all four Tequila Patron North American Endurance Cup events on the IMSA schedule.

Philipp Frommenwiler and Georgia-native Sean Rayhall return to 3GT Racing for the grueling 10-hour season-finale at Road Atlanta. Frommenwiler joins full-time drivers Dominik Baumann and Kyle Marcelli, making his third start in the No. 14 Lexus RC F GT3 after competing in the Rolex 24 at Daytona and Twelve Hours of Sebring to open the season. Rayhall is making his second start in the No. 15 Lexus, joining full-time racers Hawksworth and Heinemeier Hansson for Saturday’s endurance event after also competing at Sebring earlier this season.

In the RC F GT3 Road Atlanta debut last year, the 3GT Racing Lexus RC F GT3 entries both finished in the top-10 at the 12-turn, 2.54-mile road course located outside of Atlanta. Last year, the No. 15 RC F GT3 finished eighth after leading the GTD class for five laps. The No. 14 Lexus paced the GTD field for 18 laps last year before an incident late in the race resulted in a 10th-place finish. 3GT Racing driver Marcelli was victorious at Road Atlanta in the American Le Mans Series Prototype Challenge class in 2013 and earned a pole position there in 2012, while Hawksworth also recorded a Prototype Challenge pole position at Road Atlanta in 2014.

KYLE MARCELLI, No. 14 Lexus RC F GT3
What is your outlook for the season-finale Petit Le Mans 10 hour race?
“I really like the Petit Le Mans. I’ve had some success there in the past with some second places, and a victory as well. It’s a fun event, being 10 hours we run into the dark. I’ve never actually raced a GT car there, it’s only been in the Prototype Challenge class, so it’s been with faster race cars, but having experience now at Daytona and Sebring with the Prototypes coming up behind you in the dark, I think I’ll be okay. It’s been a rollercoaster season. We’ve had a lot of great results and great success with the No. 14 Lexus, we’ve got one more race to shine and we’ll give it everything we’ve got and see where we end up. It’s a competitive grid and you can quickly go from the front to the back and the back to the front because it’s just that competitive. It’s been a real pleasure to race the RC F GT3 this year and working with 3GT Racing and Lexus. We’ve got one more race to go this year and we’ll give it our best.”

DOMINIK BAUMANN, No. 14 Lexus RC F GT3
What have you done to prepare for the season-finale race at Road Atlanta?
“We tested at Road Atlanta and it’s a nice track. It’s a real American race track. It’s a long race there and we will have Philipp (Frommenwiler) back, which is good. We will try to continue from Sebring with the three of us drivers in a good partnership. Again, it’s a difficult race, a long race and I hope we can finish the proper way in the endurance round, which have been difficult for us this year.”

PHILIPP FROMMENWILER, No. 14 Lexus RC F GT3
How do you prepare for your first visit to Road Atlanta?
“It’s the very first time I’ll drive at Road Atlanta. To be ready for the race, I do a lot of sim training. Racing in the U.S. is one of the best things! I’m really looking forward to race again with 3GT Racing, Kyle (Marcelli) and Dominik (Baumann). The Lexus RC F GT3 is a great car in general. It’s fun to drive especially on fast tracks where you need a lot of aerodynamics.”

JACK HAWKSWORTH, No. 15 Lexus RC F GT3
Do you enjoy racing at Road Atlanta in the Petit Le Mans this weekend?
“Road Atlanta is probably my favorite track and the Petit Le Mans is definitely my favorite race. I’m really looking forward to it. It should be a track that suits us and the Lexus quite well in terms of performance. Just try to work on the car for the long run and make sure we can perform on the old tires as well as we can on the new tires and we should be in good shape for that one. That’s certainly one where you look at a track and you say it should suit our Lexus, so I’m excited about it.”

DAVID HEINEMEIER HANSSON, No. 15 Lexus RC F GT3
How do you approach the season-finale Petit Le Mans event at Road Atlanta?
“It’s our last chance to turn the glory around this season, so I’m happy that we get our shot at Road Atlanta. Petit Le Mans is one of my favorite events on the calendar, and it should also be a track that suits the Lexus well.”

SEAN RAYHALL, No. 15 Lexus RC F GT3
Are you looking forward to being back with 3GT Racing for the Petit Le Mans?
“Racing at Road Atlanta is a home coming for me being a Georgia boy. I think the track fits our Lexus RC F perfectly for us to fight for a win. Being my home track and knowing how phenomenal the RC F has been performing with 3GT Racing, I think, after gaining some experience at Sebring, we will be ready to go trophy hunting.”