Super GT Championship racer Sean Walkinshaw and team-mate Shinichi Takagi charged to a superb top four result during the penultimate race of the season at Autopolis in Japan on Sunday, 21st October, to increase their lead in the GT300 driver standings to 12 points. 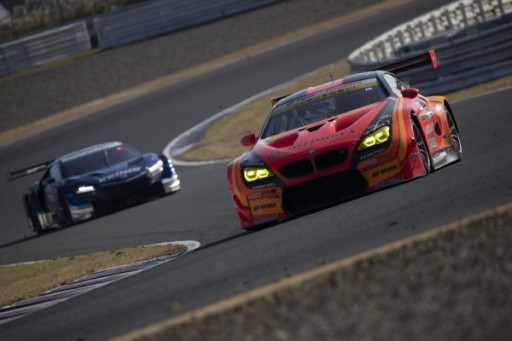 Facing a tough challenge in round seven at the 4.6-kilometre track after a red-flagged interrupted qualifying run limited the Autobacs Racing Team Aguri duo to a lowly 22nd on the grid, Oxfordshire racer Walkinshaw impressed in the second stint of the race after a terrific opening from Takagi.

Taking eight points away from Autopolis with fourth position, the GT300 championship leaders now go into next month’s final round of the Super GT season at Twin Ring Motegi in Japan with the title in sight – although Walkinshaw is refusing to be complacent with lots of hard work still ahead.

“Obviously, the result was fantastic considering how bad qualifying was”, said the 24-year-old from Chipping Norton, “The team did an incredible job with strategy to over-cut tons of cars and Shinichi did an awesome job in his stint. We couldn’t be happier as we still managed to finish ahead of all of our championship rivals, which was our only aim going into the race.”

Happy with the fifth fastest time in official practice on Saturday, 20th October, just 0.4 seconds outside the top two, qualifying didn’t work at all in the No.55 ARTA entry’s favour when the red flag stoppage limited the BMW to an uncharacteristic 22nd on the grid for Sunday’s race.

Japan’s Takagi took the opening stint and made strong early progress, swiftly climbing through into 18th position and concluding the first 10 laps of action in 17th place. Another five laps later the BMW M6 GT3 was into the top 15 in GT300 prior to an appearance for the Safety Car on lap 20.

Racing resumed within just five laps and the ARTA entry continued to climb up the order, with significant gains coming around lap 30 when the majority of the GT300 runners started to serve their mandatory pit-stops. Moving up to run comfortably in the top five, then the top four, Takagi broke into the top three with around 25 laps to run before pitting to hand over to Walkinshaw.

Into the final third of the race, the second year Super GT racer held eighth position and started to edge closer and closer to the cars ahead before taking seventh with 10 laps to go. Climbing into the top six a lap later, Walkinshaw then had a gap of around seven seconds to make up to the top five so a, nonetheless impressive, sixth place finish looked to be the maximum possible.

Continuing to push, though, and reeling in the battling No.11 Nissan NISMO GT-R GT3 and No. 65 Mercedes-AMG, on the penultimate lap Walkinshaw was in a position to pounce and he duly moved ahead of both rivals to secure a fabulous top four result.

With just three weeks to wait until the Super GT Championship finale at Motegi, Walkinshaw is now determined to leave no stone unturned along with the Autobacs Racing Team Aguri crew to be in a position to mount the strongest possible challenge in the last race of the season.

“Going into the final round everything is getting very serious, and it’s all still pretty close at the top of the championship, so we’ll have to perform very well at a track which doesn’t completely suit our car”, he said, “However I’m confident, between the work of the ARTA guys and our Bridgestone tyres, we can still get a good result which will hopefully be enough!”

Practice and qualifying for round eight of the Super GT season will take place at Motegi on Saturday, 10th November, with the 250-kilometre final race of the year following on Sunday, 11th November.