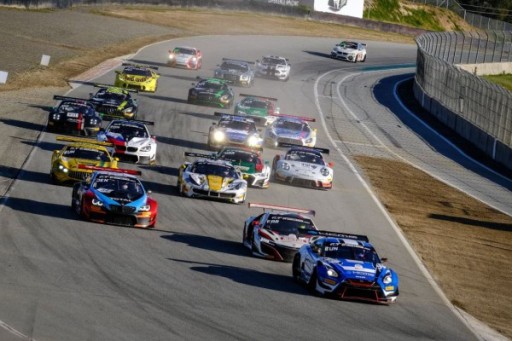 Following an impressive performance at its maiden Bathurst 12 Hour, KCMG headed to Laguna Seca with a relatively unchanged driver line-up. Alex Buncombe was the only addition, partnering Joshua Burdon and Katsumasa Chiyo in the #35 Nissan, as Alexandre Imperatori, Oliver Jarvis and Edoardo Liberati reassumed their places on board the #18 car.

The pace of the Hong Kong squad’s 2019-spec Nissan was evident during qualifying, as the #18 trio’s combined lap times saw it go fastest ahead of the pole shootout. The #35 squad ensured both GT-R cars made it into the final part of qualifying, going ninth quickest.

In the shootout, British driver and IGTC debutant Buncombe pushed the #35 Nissan hard, with both his runs good enough for second on the grid, finishing just 0.186 seconds off pole. Imperatori, who had been quickest in qualifying, recorded the ninth-fastest time.

It was a lightening start by 2015 Blancpain GT Series champion Buncombe who slipped into the lead on the run to Turn 1, maintaining that advantage until the first round of driver changes. Burdon then took over and re-joined the race just outside the podium places.

The Australian continued to run inside the points, handing the car over to Chiyo for his first stint. The Japanese driver and Buncombe, who took over for a second run, hauled the Nissan into seventh, but a long pit stop as Burdon returned behind the wheel cost more time.

The caution-free race made it difficult for the #35 Nissan drivers to regain the lost places and they finished 12th having recorded the fastest lap.

Meanwhile, the #18 Nissan ran to strategy just outside the top-10 for the first half of the race, but climbed into the points-paying places with Imperatori on board as the final three hours approached.

Liberati and Jarvis continued that forwards momentum heading into the final third of the race, with the trio ultimately crossing the line in ninth place, picking up two valuable points for Nissan in the IGTC Manufacturers’ Championship.

The third round of the Intercontinental GT Challenge is the famous 24 Hours of Spa (25-28 July), where KCMG will make its debut with the Nissan GT-R NISMO GT3.

Alex Buncombe, #35 Nissan GT-R NISMO GT3: “I have mixed feelings after the California 8 Hours. With such a promising qualifying and start to the race it was a shame not to come away with a good result and some decent points. We can all take many positives away from the weekend and we have learnt a lot, which the team can take forwards to Spa. Lady luck was not on our side, and some small issues forced us to lose laps in the pits. A huge thanks to KCMG for giving us a strong car and to my team-mates who did a great job.”

Katsumasa Chiyo, #35 Nissan GT-R NISMO GT3: “I want to thank everyone at KCMG, as well as Alex and Josh for the great effort. The team, car and all drivers performed well throughout the weekend, taking front row and leading the race for the opening hour, but unfortunately a mechanical failure ended our chances. It was disappointing for all of us, but we will never give up and work towards getting back to the front at Spa.”

Josh Burdon, #35 Nissan GT-R NISMO GT3: “It was a mixed weekend at Laguna Seca. Unfortunately, due to circumstances out of our control, we didn’t walk away with the results we wanted after leading early and running in the top-three. Looking at the positives, we showed we have the pace as a team to win races this season, we just need some luck on our side. Thank you to my team-mates, and the boys and girls at KCMG for all of the hard work and I can’t wait for next IGTC round at Spa.”

Oliver Jarvis, #18 Nissan GT-R NISMO GT3: “There are a lot of positives to take away from the weekend but ultimately neither car was able to achieve the result the team deserved. After a tough opening stint we pushed hard for the remainder of the race and at times showed great pace, so ninth seems likes a missed opportunity. Despite leaving Laguna Seca disappointed we learnt a lot and will head to Spa full of confidence. Once again a huge thanks to the team for their hard work and giving us a great car.”

Edoardo Liberati, #18 Nissan GT-R NISMO GT3: “Really enjoyed to race at Laguna Seca. KCMG delivered an outstanding performance throughout the weekend, going fastest at the end of the average qualifying sessions with our Nissan, and a front row start with the sister car. Some issues cost us a potential podium, but ninth still means good points for this super competitive championship.”

Alexandre Imperatori, #18 Nissan GT-R NISMO GT3: “We had some nice battles in the California 8 Hours, finishing ninth in a very competitive field. It could have been so much better though without some issues. We’re now looking forward to returning to action at the Spa 24 Hours. Thanks to KCMG, Nismo and my team-mates for the hard work.”

Ian Geekie, Team Manager: “We had the pace to be fighting for victory here, which considering this was our first time at Laguna Seca is very promising going forwards. It is another missed opportunity, but we know where to improve and I’m sure the luck will swing in our favour soon. It was a great job by the drivers and now the focus is on the 24 Hours of Spa.”