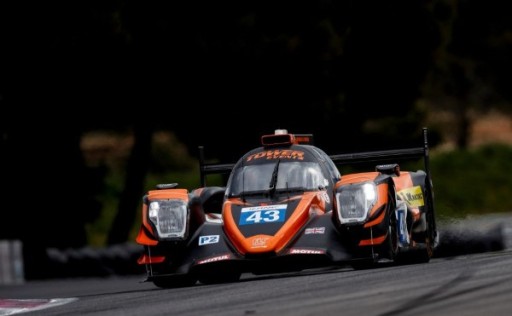 The Bolton team’s LMP3 line-up, on the other hand, struggled to get to grips with an ill-handling Ligier JSP3, Christian Olsen, Martin Vedel and Martin Rich emerging from a frustrating week in 13th in the Le Castellet curtain-raiser.

The race weekend was preceded by two days of official testing. Senna and Maini were charged with setting up the #43 ORECA 07 in cooperation with RLR MSport’s engineers, while Farano worked separately with the team’s professional driver coaches to refine his techniques for his competitive LMP2 debut.

Frustratingly, a debilitating damper issue prevented Senna from breaching the top ten in qualifying, resigning him and RLR MSport to 11th on the 41-car starting grid for the 4 Hours of Le Castellet at Circuit Paul Ricard.

However, the former FIA World Endurance Champion showed his class on raceday, quickly breaking into the top ten and then rising to seventh at the expense of Anders Fjordbach, Phil Hanson and Ryan Cullen before the first round of pit stops.

Senna’s relentless forward momentum ensured he was fourth and nipping at the heels of the podium contenders at the end of a stunning double stint that preceded Farano’s maiden LMP2 race appearance.

Farano from Toronto, Canada, held seventh position for much of his stint, only losing one place to the resurgent Cullen after an admirably defiant defence, ensuring Maini was in a position to make an impact on the run to the chequered flag.

The young Indian possessed winning speed and consistency on his endurance sportscar racing debut, recording a 1m41.164s – one of the fastest laps of the race – during a storming drive that was only punctuated by a splash-and-dash for fuel, to secure a highly respectable eighth-place result for RLR MSport.

“It was a very good race and a particularly effective learning experience for the entire RLR MSport team,” said Senna. “In fact, the result is better than expected, given that everything came together so lastminute. My teammates, John (Farano) and Arjun (Maini), did a great job, the pit stops were all on point and the level of car preparation was high, so the potential is there. This being the team’s first LMP2 race weekend, it was always going to be very difficult to achieve a big result, but eighth is a fair outcome and we will only do better the next time out when we will have more scope to push harder.”

Farano said: “RLR MSport has performed very well and the ORECA 07 LMP2 is so enjoyable to drive. We have shown a lot of promise; there are a few things to work on before Monza, but we’re really positive that we will produce a good performance there. We have to remember that this is basically a brand new team, bringing three drivers together for the first time, therefore eighth is a very good outcome. We all stayed out of trouble, the pit stops were flawless and everybody did what was expected of them, so I’m really looking forward to the 4 Hours of Monza!”

In LMP3, RLR MSport’s drivers made great strides in dialling out balance issues that frustrated their progress during the ELMS Prologue, although they were still somewhat compromised in qualifying and the race.

From 13th on the LMP3 grid, Olsen drove impeccably to climb the leaderboard during the first hour, before passing the reins of the #15 Ligier JSP3 to teammate and fellow countryman Vedel, who continued RLR MSport’s ascent.

The young Dane rose to sixth and matched those ahead of him for pace, despite being on heavily worn tyres at the midpoint of the 240-minute contest.

However, Vedel ultimately lost track position to hard-charging Norma M30s on fresh rubber prior to the final driver-change, when Rich took over for the run to the chequered flag.

The British ‘gentleman’ driver consistently hit his target lap times during a stellar double stint, spinning once on his way to 13th in the final LMP3 classification, and he reflected on the result by saying: “The result isn’t what we wanted coming to Le Castellet, but it’s pretty representative of where we have been all week. We hoped we might be able to go further by making clever strategic calls during Safety Cars and Full Course Yellows, but there were no opportunities. I’m pleased with my first stint and satisfied with my second on worn tyres, even though I made a mistake that cost us time.

“I’ve found this week pleasing because we go to Monza with a plan, knowing Christian (Olsen), Martin (Vedel) and I all want to move the car in the same direction. We just need to dial the Ligier in so we’re able to lean on it a little more.”

Olsen said: “Today, I feel we did as much as we could with what we had. I’m happy with my own performance and RLR MSport’s efforts, as it was a fault-free run, but I obviously want to achieve bigger results. It has probably been one of the most difficult race weeks of my career because of the problems finding a balance with the car. However, my qualifying laps and average race pace were better than what was achieved in 2018 and, even accounting for different conditions, it seems the entire grid has taken a significant step forward.”