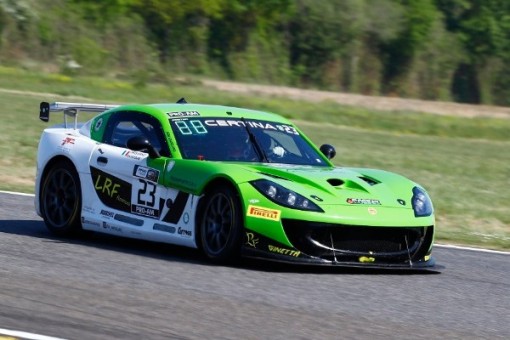 The youngsters, who are managed by Honda’s driver Tiago Monteiro, will make their debut in the series promoted by Race Ready with the SRO Motorsport Group’s support in at Jarama, June 15th – 16th.

César Machado, aged 26, has already a big name on the Portuguese racing scene, having won the Fórmula Ford Portugal title. Last year, he competed in the TCR Italia and grabbed some interesting results.

César Machado has already international experience, but his GT4 South European Series debut represents a step into the GT platform: “it’s a door to the GT world, where the cars are visually exciting and have amazing performances. It’s a category that is growing in Europe and has the involvement of several brands. It’s a different kind of cars from what I’m used to – heavier, more powerful and rear wheel drive – and I’ll have to change my drive style accordingly, but I like new challenges and I hope to be ready for it”.

Mariano Pires, with only one-year experience in car racing, will have a big step ahead, performance wise, but he is decided to have a smooth adaptation to a universe of novelties: “I know I’ll have a huge challenge and work to do, but I couldn’t be happier with this program. It will be everything new to me – championship, team, car and sharing the car with other driver – but I know that I will have the support from César (Machado) and Tiago (Monteiro), who will help us to evolve and to achieve our goals. I’m motivated and I’m looking forward to drive the Ginetta”.

Diogo Ferrão, the head of the GT4 South European Series organization, added: “it’s great to have another Portuguese pair in our series, which helps to have a high driving standard. Besides, it’s a young team and it shows that the GT4 South European Series is a good platform for young drivers to launch their careers in the GT world, where there is a high drivers professionalization rate. We will keep working to have a numerous and a quality field”.

The series promoted by Race Ready in partnership with SRO Motorsports Group kicked off at Nogaro, in the Coupe de Pâques. The next round will be held at Jarama, June 15th-16th, and will visit three other circuits – at Circuit de Barcelona-Catalunya, Autódromo Internacional do Algarve and Circuito do Estoril. In addition, a “Special Cup” will be held at the Vila Real street circuit.