Ahmad Al Harthy celebrated his second podium finish in as many events during a highly charged round two of the Blancpain Endurance Cup season at Silverstone Grand Prix Circuit on Sunday, 12th May, with a season-best second place in the Pro-Am class for Oman Racing. 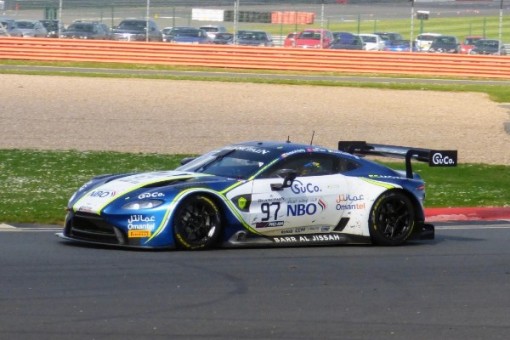 Aston Martin Vantage GT3 racer Al Harthy, and team-mates Charlie Eastwood and Salih Yoluc, started the day perfectly with the squad’s second Pro-Am pole position of the year to set-up a realistic chance of challenging for a first victory of 2019.

While those hopes were cruelly ended by an untimely Full Course Yellow period just after the team had served its first pit stop, Al Harthy having led Pro-Am before handing the No.97 car over to Yoluc for the second hour, third place at the chequered flag marked an impressive recovery. Post-race, though, a penalty for the victorious No.74 Mercedes-AMG elevated Oman Racing into second place.

Importantly, added to the points for third place during the championship opener at Monza in Italy last month, the Oman Racing drivers are second in the Pro-Am standings as the season heads to the halfway point at Paul Ricard in France a few weeks from now.

“After an amazing start I had a lot of things to avoid, there was a big incident on the first lap but I managed to avoid any contact”, explained Al Harthy, “For the first three laps everyone was trying to fight hard for position, it was very difficult, but once I got my rhythm I managed to recover to second and we were really catching first. Passing backmarkers and so on made it a yo-yo effect between us.

“Salih had a difficult stint with Safety Cars and Full Course Yellows, but then Charlie did an amazing job to bring us back from fifth to a podium. That’s what we want this year, podiums and consistency and we know we have better, stronger pace that is going to come in the next few races. Overall, I’m happy with the performance and it’s always great to go back to Oman with another podium!”

Following a strong day of preparation on Saturday, 11th May, Oman Racing did exactly what the team had planned in final qualifying on Sunday morning by securing its second Pro-Am pole position in as many race meetings.

Yoluc took the first of the three sessions, setting the fifth best Pro-Am time in a run which was frustrated by two red flag stoppages, before Al Harthy shot to the top of the class times in session two with a time of 2m01.392 seconds. In the final run, Eastwood delivered a sensational lap of 1m59.481 seconds – fifth quickest overall – to ensure a well-deserved Pro-Am pole start.

National Bank of Oman, Oman Ministry of Sports Affairs, Omantel and Barr Al Jissah backed racer Al Harthy took the first stint of the race and performed impressively. Although delayed by a lap one incident just ahead at the sweeping turns through Becketts and Chapel, which dropped the Aston Martin to third in Pro-Am, the Omani hit back strongly after a lengthy Full Course Yellow period.

Passing the No.52 AF Corse Ferrari on lap 10 to move into second place, Al Harthy consolidated his position over the next half an hour or so and as the opening hour headed towards its conclusion he started to close further on the class leader. When his rival pitted with just under an hour complete, the Oman Racing driver briefly moved into the lead before pitting at the end of lap 25.

Yoluc climbed aboard the car for the second stint but a Full Course Yellow period soon after worked against the team, with others able to profit from less time loss in their mandatory pit stops. Yoluc was bundled back to fourth place soon after the re-start and then survived a worrying moment as the race approached mid-distance, making unsighted contact with a Lamborghini exiting the pits.

Running fifth in Pro-Am before handing over to Eastwood for the final hour, when the Aston Martin ‘Junior’ driver took to the track he was fifth in class and with a lot of work ahead to try and climb back into the podium placings.

Moving into fourth with around three quarters of an hour to go, Eastwood then climbed into third shortly after to seal the podium result. Shadowing the Ferrari of Andrea Bertolini, little more than seven seconds covered the leading trio in Pro-Am into the final 30 minutes of racing but the order then remained unchanged to the chequered flag, before the post-race penalty for the winning car.

Paul Ricard in the south of France will host round three of the Blancpain Endurance Cup season, the annual six hour evening race, on Saturday, 1st June.