SCUDERIA PRAHA LEADS AFTER THREE HOURS AT THE 12H BRNO

The Bohemia Energy racing with Scuderia Praha Ferrari 488 GT3 (#11, Jiří Písařík / Josef Kral / Matteo Malucelli) currently leads the Hankook 12H BRNO after three hours of racing around the 5.403km Automotodrom Brno. The local team, which has never been bested at the Czech event, has so far completed 79 laps after a strong opening run, but was unable to pull a lap clear of its nearest rival, the Car Collection Motorsport Audi R8 LMS (#88, Jürgen Häring / Taki Konstantinou / Tim Müller / Markus Winkelhock). The two teams will consequently start on the front row of the grid for tomorrow’s restart, and, crucially, on the same lap. 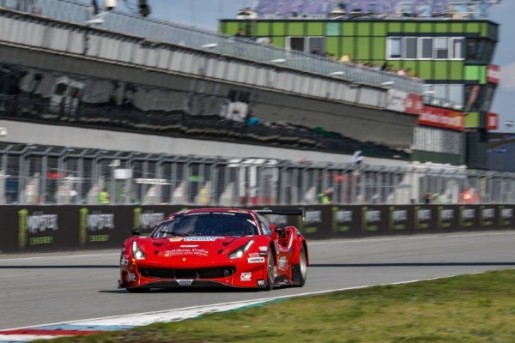 Despite slippery conditions leaving grip at a premium around the Brno circuit, Scuderia Praha was nevertheless happy with its progress thus far.

“For the moment, we are happy, but it’s only the first part,” Matteo Mallucelli explained to radiolemans.com’s Joe Bradley. “It’s a shame, because we nearly pulled a lap clear, but that’s okay. For now the car is working, but we cannot push on the car under braking otherwise we have oversteer. Tomorrow, we’ll just have to drive as cleanly as possible.”

Having claimed outright pole position for the event earlier this afternoon, Car Collection Motorsport now lies 2nd, in spite of a bizarre incident before the race had even started with the OLIMP Racing Audi R8 LMS Evo 2019 (#8, Marcin Jedlinski / Mateusz Lisowski / Karol Basz). Lining up behind the safety car for the rolling start, the two Audis sharing the front row barged into each other, the loss of momentum giving its nearest rivals the edge heading into turn one. Having also lost time while re-fuelling, OLIMP Racing has since slipped to 9th.

Having secured pole position earlier this afternoon, and having lost significant time in the early stages to fading grip levels, Red Camel-Jordans.nl team owner Ivo Breukers was understandably overjoyed to have held onto the lead, though admitted to be a little unsure how the team had done so…

“I don’t know!” a smiling Ivo told radiolemans.com’s Joe Bradley. “We played around a little bit with a few quantities and the back of the car is now a little closer to us in terms of tyre wear. It’s a hard race, a strange race, but it’s fun.”

Further back in A3, the Synchro Motorsport Honda FK8-Civic Type-R (#676, Alyn James / Daniel Wheeler) continues to lead after three hours, albeit less comfortably than it had done at the two-hour mark. Having amassed a four-lap advantage, the British team opted to change its camber setup in an effort to preserve its tyre life, losing the former 24H TCE SERIES champions eight minutes in the pitlane. The British team’s closest rival is the Hofor Racing by Bonk Motorsport BMW M240i Racing Cup (#869, Axel Burghardt / Jurgen Meyer / Nicole Holzer / Martin Kroll), while the Winkler Tuning BMW E46 123D (#666, Michael Winkler / Michael Rienhoff) has completed only three racing laps after suffering an early oil leak.

Following a brief overnight hiatus, the 2019 Hankook 12H BRNO will re-start on Saturday morning at 10.00 hrs local time, and will continue uninterrupted until the chequered flag is flown at 19.00 hrs that evening.