CORVETTE RACING AT LE MANS: FROM HOPES TO HEARTBREAK

Corvette Racing’s hopes for a magical victory in its 20th straight appearance at the 24 Hours of Le Mans didn’t come to pass, but the effort of the program was never stronger than what the team displayed Saturday and Sunday in the world’s biggest endurance race. 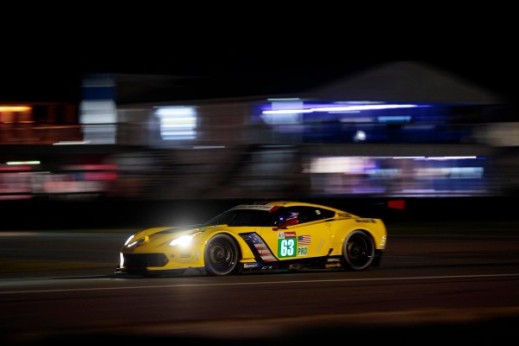 The No. 63 Mobil 1/SiriusXM Chevrolet Corvette C7.R of Antonio Garcia, Jan Magnussen and Mike Rockenfeller finished ninth in the GTE Pro category on a day where the trio was firmly in contention for the first 20 hours. Three unlucky safety car periods and an untimely late trip to the garage for repairs following a spin put a dent in the plans for a ninth class victory in 20 years.

Le Mans struck hard at both Corvette Racing entries. The No. 64 Mobil 1/SiriusXM Corvette C7.R retired following a heavy crash for Marcel Fässler near the six-hour mark. The incident happened in the lightning quick Porsche Curves toward the end of the lap. Fässler – driving with Oliver Gavin and Tommy Milner – was hit from behind after making a pass on a slower car with the impact sending the Corvette hard into the wall on driver’s right.

The damage was too extensive to repair and return the car to the race. Fässler was evaluated at the track medical centre and was sent to a local hospital for a CT scan, which came back normal.

The No. 64 Corvette was up and down the order early with Gavin climbing from 11th at the start to fourth in class during his opening two stints. Debris on his tires made it challenging for him to maintain his early pace but he and Milner had relatively calm stints before handing over to Fässler, who was matching the pace of his teammates before in incident.

The No. 63 led early and often. Garcia began the race from the third position but needed less than 20 minutes to move to the point in a frantic start.

All three drivers of the No. 63 Corvette took turns in the lead early. The first safety car period of the race during the sixth hour brought the top nine GTE Pro entries to within 15 seconds of each other at the six-hour mark. Another safety car near the 10 hours running split the two lead cars from the rest of the GTE Pro field, effectively taking what had been a nine-car battle down to two with the Corvette part of the second group.

The early-morning period saw the leading GTE Pro entry run into trouble, allowing the remaining Corvette – which had chipped away on the lead pack for a number of hours – to move back into contention. By the 16-hour mark, the C7.R had moved back into the lead and a strategic game of chess developed between the No. 63 Corvette and the eventual winning Ferrari.

The momentum seemed like it was swinging permanently toward the side of the Corvette when disaster struck with three-and-a-half hours to go. Rockenfeller pitted for fuel, tires and a driver change to Magnussen during a safety car period. The pit stop was excellent – as they had been all race – but the pit exit was closed, which once again prevented the Corvette from catching the safety car queue that included the GTE Pro leader.

Once under way, Magnussen spun late in the lap at the Porsche Curves on cold tires and contacted the outside wall with the front-left of the Corvette. The crew repaired the suspension on that corner of the Corvette, losing just six minutes but two costly laps. A final late-race visit to the garage thwarted any hopes of gaining additional positions.

There is little rest for Corvette Racing with the team returning to IMSA WeatherTech SportsCar Championship competition in two weeks at Watkins Glen International for the Sahlen’s Six Hours at The Glen.

ANTONIO GARCIA, NO. 63 MOBIL 1/SiriusXM CHEVROLET CORVETTE C7.R: “It was super tough all race, especially for being all the way up at the front for 21 hours. The early safety car around five hours really put us down, and I got pretty upset about that. For me, I thought the race was lost but you never know at Le Mans. A few more stints in and we were back in the lead. It’s a shame that we didn’t put it together all the way to the end because I think everyone here deserved to win. The team made a fantastic effort. The preparation was really good, and we proved that to every other team out there – the preparation of the cars, the pit stops, the brake changes and the way we could go for a win instead of waiting for the race to come to us. I felt like we had everyone afraid of us. Most of the teams at Le Mans probably feel that we had the car to beat, and I think that’s right. But Ferrari did a perfect run and they won. All we can do is congratulate them. Then we will come back and win it.”

JAN MAGNUSSEN, NO. 63 MOBIL 1/SiriusXM CHEVROLET CORVETTE C7.R: “Up until it all went wrong, we did the best we could and that put us in front. The guys did a fantastic job all race – the crew, the engineers and the drivers… everybody. But the safety car came out there late, we had to pit and effectively that took the win away. P2 was in the cards; that’s not what we came here for but for sure we would have taken that with the win not being on the table any longer. Unfortunately I clipped a curb on cold tires and hit the wall. I can’t begin to describe how horrible I feel for the guys and all the hard work they have put in for the past year. We had the car in front and a mistake like that takes it all away. I don’t know how to apologize for that but hopefully I can make it up to them someway.”

MIKE ROCKENFELLER, NO. 63 MOBIL 1/SiriusXM CHEVROLET CORVETTE C7.R: “Thanks to Corvette Racing for giving me the opportunity to race here at Le Mans again. I always love it even though as we saw this weekend it can be one of the toughest races in the world in that you can be a bit unfortunate. We had a really good car… the Corvette was running super nice, especially at the end of the race. The track and everything evolved in the right direction; when it rubbered in and our car came alive… I think we had everything to fight for victory, but obviously the rules with these safety cars are a bit unfair. We’ve known this since years past and it has been proved it is not the good way of doing it. I think we need to think about it, but that is obviously not our job.

“Again, the car was prepared well and I always enjoy it to race here with Corvette Racing. Personally I was really happy to drive the car. I felt confident at the wheel, I felt I could get the most performance out of the car and really push hard and fight for it. So personally I was super happy with my own performance, but obviously the results are not what we wanted. Both cars were super unlucky… our sister car and Jan on our car, but that’s racing you know. We always push to the limit and sometimes things go wrong. And this also is something special within the Corvette team: there is no bad word about anything. And I’ve seen it different in my career, I can tell you. Here, from top to bottom, they all work together and they consider it a sport. It’s racing, you try hard, and you win and you lose together. And this is what you feel at Corvette, and this is a good feeling for a driver. Because one day you make a mistake and it’s not nice if people drag you down when they should say,’Hey, it happens. we’ve won so much together and sometimes things go wrong,’ which for me again shows I’m in the right team here and I hope we’ll have some more opportunities in the future to win this together.”

OLIVER GAVIN, NO. 64 MOBIL 1/SiriusXM CHEVROLET CORVETTE C7.R: “This has without a doubt been a tough Le Mans 24 Hours for Corvette Racing. On the 64 Corvette side, we had a promising start with good pace. We got ourselves up to fourth place, which ended up being the high-water mark as it turns out. Some little bits and pieces didn’t go our way but the race got reset with a safety car, and we were looking good again. But it wasn’t to be. Marcel had the incident with the GTE Am car… it was such a big hit. We’re all so happy he’s been able to walk away. It’s a testament to the work that Corvette Racing and Chevrolet have done on the C7.R – our driver cell, the impact structure. Those all really helped protect Marcel. Then it was all eyes on the 63 Corvette and it was looking so well for so long. This race can bite you so hard sometimes and it can be tough to take. Everyone at Corvette Racing put so much into this for months and months. It’s very special but it does take a lot of preparation. When you that chance of winning taken away, that’s really hard for the guys to take. They worked so, so hard over the last few months. We can be proud of what we achieved over this race but unfortunately we weren’t standing on the top step of the podium.”

TOMMY MILNER, NO. 64 MOBIL 1/SiriusXM CHEVROLET CORVETTE C7.R: “It definitely was not the 24 Hours that we were hoping for. We can all be super proud of all the efforts from everyone at Corvette Racing. We had two fast, reliable Corvettes – all ingredients that you need for a good race. Unfortunately what ends up being the most important piece – the luck – …we didn’t have that today. It’s a cliche but that’s racing. Everyone is pushing at 100 percent, and when it is this close and the competition is this fierce, the margin for error is razor-thin. It’s unfortunate to have had our race end early. We can be proud of the effort of this whole team. We’re all proud to drive for Corvette Racing and Team Chevy.”

“We’re happy that Marcel is OK, and that’s one of the reasons I’m proud to drive these cars like we do. We know things happen sometimes but we know we are safe. I feel bad for the 63 team too. They showed how competitive we can be with a seven-year old car. It’s just too bad that today was not Corvette Racing’s day.”

MARCEL FÄSSLER, NO. 64 MOBIL 1/SiriusXM CHEVROLET CORVETTE C7.R: “It was a tough weekend for us. It definitely was not what we were hoping for. It was an early end to our day. Everyone did a double stint, and I was on my last lap before I was to hand off to Olly. Unfortunately I got hit by a GTE Am driver that took me out and I hit the barrier quite hard. For us the race was over. I’m happy Corvette is the safest GT car we have in the field. Every system worked well and I have no issues…feeling well even though the impact was hard. I’m happy I’m OK but on the other hand I am sad because we were taken out of the race. For sure we wanted to achieve a good result on Corvette’s 20th year at Le Mans. For sure that’s kind of racing but it’s still sad for the team that all the preparation we did ended all of a sudden. It is difficult to take.”