The qualifying for the Chang SUPER GT RACE, Round 4 of the 2019 AUTOBACS SUPER GT series, took place on June 29 at the Chang International Circuit (one lap 4,554m) in Buriram, Thailand. The GT500 class pole position winner was the No. 6 WAKO’S 4CR LC500 driven by Kazuya Oshima and Kenta Yamashita with a course record of 1’23.260 by Yamashita. In the GT300 class, the class pole position went to the No. 25 HOPPY 86 MC driven by Takamitsu Matsui and Kimiya Sato, also in a course record time by Matsui. With this, these two cars will start from the front position on their respective class starting grids in the race on June 30. 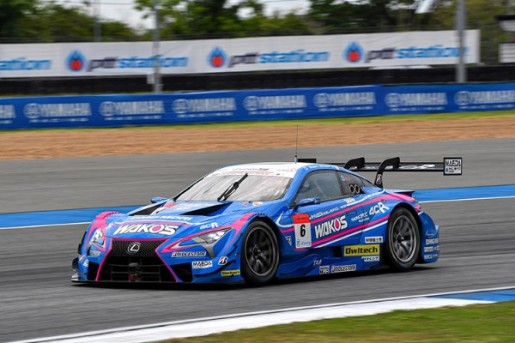 This round in Thailand is the only race of the SUPER GT series competed outside of Japan and the official qualifying is run in the same two-stage knock-out style as usual that sees the teams narrowed down from the Q1 to the Q2 sessions. The 15-minute GT500 class Q1 session started at 15:20 local time. Although this is the rainy season in Thailand, this day saw little chance of rain from the thin cloud cover overhead, while the air temperature of 33-degrees C., but the moderate humidity of 52% made it a relatively comfortable day for the spectators.

In the GT500 class, the No. 8 ARTA NSX-GT (Tomoki Nojiri) recorded the top time of 1’23.466. The second and third fastest times went to the morning practices fastest car, the No. 3 CRAFTSPORTS MOTUL GT-R (Frederic Makowiecki), and the No. 36 au TOM’S LC500 (Yuhi Sekiguchi), putting one each of the three makers cars, the Honda NSX-GT, NISSAN GT-R NISMO GT500 and LEXUS LC500 in the top three.

In the 10-minute GT500 class Q2 session that started from 16:03, the No. 6 WAKO’S 4CR LC500’s Kenta Yamashita, in his third season in this class, beat the existing course record (1’23.341) with a stunning last lap of 1’23.260. Although his team No. 6 teammate Kazuya Oshima had barely been able to qualify the team for 2 by placing 8th in Q1, some successful last-minute machine setting changes enabled them to take pole position. Qualifying 2nd was the No. 19 WedsSport ADVAN LC500 (Q1: Sho Tsuboi; Q2: Yuji Kunimoto) that got their first class win here at Chang circuit in 2016. This gave LEXUS LC500 cars a 1-2 finish. Third position went to a NISSAN GT-R NISMO GT500, the No. 3 CRAFTSPORTS MOTUL GT-R (Kohei Hirate). The top qualifying Honda NSX-GT car was the No. 1 RAYBRIG NSX-GT (Q1: Naoki Yamamoto; Q2: Jenson Button) in 7th position.

In the GT300 class Q1 session, The No. 56 REALIZE NISSAN AUTOMOBILE TECHNICAL COLLEGE GT-R (Sacha Fenestraz) recorded the fastest time of 1’32.907. But in Q2 it was Kenta Yamashita in the No. 25 HOPPY 86 MC beat his own Chang circuit course record (1’32.102) by a big margin to take the GT300 class pole position with a time of 1’31.893 for the second round in a row this season, following the one at Suzuka in Round 3. Qualifying 2nd was the No. 56 REALIZE NISSAN AUTOMOBILE TECHNICAL COLLEGE GT-R (Kazuki Hiramine), while the 3rd qualifier was the No. 7 D’station Vantage GT3 (Q1: Tomonobu Fujii; Q2: Joao Paulo de Oliveira) team managed by former American baseball Major League pitcher Kazuhiro Sasaki.

No. 6 WAKO’S 4CR LC500 LC500
Kenta Yamashita
“After I finished my time attacks (in Q2), I didn’t know I had won pole position until I got back to the pit, so I was a bit surprised. In Q1 [Kazuya] Oshima-san had a hard time, so we changed the machine settings based on his advice, and those changes worked perfectly. We owe this pole position to Oshima-san and the team crew that worked quickly to change the settings.”

No. 25 HOPPY 86 MC
Takamitsu Matsui
“I am very happy that we got pole position, but I am even happier that I was able to do it by beating my own course record here at Chang circuit. But, I think that we owe both the pole position and the course record to the recent progress that has been made in the machine and the tires. I am very grateful to the team and to Yokohama Tire for this.”