In today’s IMSA Sahlen’s Six Hours of The Glen at Watkins Glen International, BMW Team RLL scored a fifth place finish with the No. 24 BMW M8 GTE of John Edwards and Jesse Krohn. The No. 25 BMW M8 GTE of Tom Blomqvist and Connor DePhillippi was credited with a seventh place finish after retiring from the race on lap 159 following a fire in the pits during refueling. The race was won by the No. 911 Porsche 911 RSR. 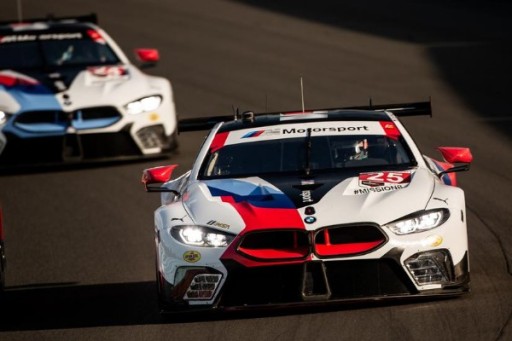 The fire may require the build of a spare chassis in the few days remaining before the team is scheduled to arrive at Canadian Tire Motorsport Park for the Mobil 1 Sportscar Grand Prix this coming Thursday.

Starting drivers Edwards, in the No. 24 BMW M8 GTE, and DePhillippi, driving the No. 25 BMW M8 GTE, stayed out of trouble through two early caution periods in the opening 30 minutes of the race to move up to the second and fourth GTLM class positions from their fourth and sixth place starting spots respectively. The first rounds of pit stops occurred just past the one hour mark with both drivers staying in their cars. Driver changes were made during the second pit stops on lap 53 just before the race was slowed for a yellow flag with Krohn taking over the No. 24 BMW M8 and Blomqvist taking over the No. 25 machine. As competitors made their stops, Blomqvist cycled to lead the class with Krohn moving into third. Krohn made the third stop for the No. 24 M8 on lap 84, remaining in the car after fuel and new Michelins. Blomqvist pitted one lap later for service after leading 22 laps of the race.

At the race’s mid-point, Blomqvist raced in fourth with Krohn one position back in fifth. Krohn was the first of the BMWs to pit on lap 105, remaining in the No. 24 M8 for a third stint. Blomqvist ran an additional 15 laps before pitting and beginning his third stint. Driver changes were next for BMW Team RLL as Krohn pitted on lap 132 to hand off to Edwards. Blomqvist pitted on lap 144, returning the No 25 M8 to DePhillippi. A caution flag brought both BMW M8s and most of the GTLM field back to the pits on lap 152 for service and possibly a run to the checkered flag. Unfortunately for DePhillippi, the No. 25 M8 was forced to pit for repairs to the front of the car for damage that occurred during Blomqvist’s last stint. A fire erupted while the fuel was being topped up causing a large fire. No one on the team was injured, but the car was retired from the race. Edwards continued to fight, ultimately finishing fifth.

“Tough day” said Brandon Fry, RLL Technical Director, “We unfortunately had an incident with the No. 25 car with a fire in the pits, so we need to understand what happened there. Ultimately, that stopped that car short of the end of the race. The No. 24 car struggled a little bit with fuel economy but not pace so we just need to figure that out before next weekend’s race in Canada. CTMP should be a good track for us and for our cars I think. Watkins Glen International was as well but the race was just a little tough for us today. We have high expectations for the 2 hour 40 minute race at CTMP.”

The IMSA WeatherTech SportsCar Championship will be back on track in only a few days preparing for the July 7th Mobil 1 Sportscar Grand Prix at Canadian Tire Motorsports Park, in Bowmanville, Ontario, Canada.

Tom Blomqvist, driver No. 25 BMW M8 GTE (P7):
“We got ourselves into a good position early on but it was a little bit of a strange race and everyone had to manage a lot with the fuel and with the yellows at the beginning. We were running our strategy and it looked like we were on for a good result but unfortunately an incident caused some damage to the front. The car was still okay but things started to go wrong a few laps later and it definitely did not get better with the fire. The track for next weekend’s race looks cool and really fun. I am really looking forward to racing at CTMP. We have made a lot of progress this week with the car and we’re hungry for some good results now. We just need to run a smart race and see what that brings. I am looking forward to it!”

Connor DePhillippi, driver No. 25 BMW M8 GTE (P7):
“I think from the beginning it was pretty clear we were going to be in the mix, the car was really, really good. I felt like the M8 GTE was very well balanced, so I was very optimistic about results. During a few points in the race we made some decisions to do other strategies and those did not fully work out. Our pace was still good and even after the contact Tom had, the car felt very good. We had to retire the car but to think of the positives this is the best balanced M8 I have had and we can take that with some smiles. For me, CTMP is one of my favorites on the calendar. It really suits our car and is similar to both Watkins Glen and Road America. Higher tire degradation can be an issue there and some rain can also play in our favor. Anything is possible in Canada, so if we have a cleaner race, I believe that we can finish in a good position.”

John Edwards, driver No. 24 BMW M8 GTE (P5):
“We ran at the front in the beginning of the race. It was promising with how close everyone’s pace was but we just lost some time at some points throughout the race. At a track like Watkins Glen, where everyone is very fast, it can be hard to gain that time back. So looking at the pace of the car we are definitely disappointed to finish 5th. Things are close here and CTMP is a similar track so we expect to be close there as well. Everyone seems to be on pace so we just need to minimize mistakes there.”

Jesse Krohn, driver No. 24 BMW M8 GTE (P5):
“For the amount of hard work we put in this weekend the result does not really correlate. The car felt good, everyone was so close and the pace of the race was very fast, with no room for mistakes. We didn’t have the cleanest race so we ended up in P5. Last year was my first year at CTMP. I really like the flow and the track, so I am looking forward to it. I am glad we do not have to wait more than a week to go out there and try and redeem today’s result because we definitely could have been in a better position today if things worked out just a little bit differently.”

Bill Auberlen, driver No. 96 BMW M6 GT3, Turner Motorsport (P2):
“More than fighting for a win or for a record, I really wanted to get a podium for this team. It has been a long dry spell and we really needed it. We had the car to win for sure today. The car was basically running in second all day but as soon as I got in, I go one lap and suddenly get hit. The tire blows up and that puts us back to dead last so we had to claw our way back up one by one. Without that contact we probably would have had a stress free cruise to the end. I am glad we got one on the board this season and I always say once you find your way to the podium it’s easier to find your way back again. Now that we’ve been there, we have the smell and taste of it and we love it. We’re going to get back. CTMP is a track we love. It really suits the car and I can’t wait to get into the car next weekend.”

Turner Motorsport Finishes Second in GTD.
The No. 96 Turner Motorsport BMW M6 GT3 missed a second consecutive GTD class win at the Sahlen’s Six Hours of The Glen by only .676 seconds today after a strong closing stint by Bill Auberlen and great opening drives by Robby Foley and Dillon Machavern. The runner-up finish was the team’s best result of the season.