Lamborghini tasted victory in the 24 Hours of Spa in the Silver Cup as Sandy Mitchell, James Pull and Jordan Witt took the #78 Barwell Motorsport Lamborghini Huracán GT3 Evo one place higher than their 2018 finish. 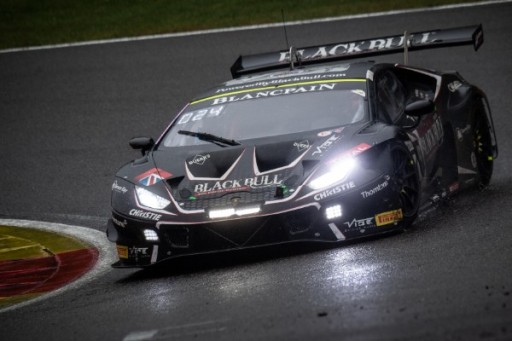 Mitchell started the race in the #78 and survived contact with #16 Modena Porsche to run second behind the #55 Attempto Audi after three hours. Heavy rain played a part throughout and after a red flag stoppage of approximately six hours, the trio moved into the lead once the obligatory five-minute technical pit-stops.

Several full course yellows and safety car interventions later and the victory was assured. “[It was] a really tough one, the weather conditions in the middle of the night were really difficult for everyone. Jordan did an amazing job to keep the car on the track when a lot of people didn’t. To take the Black Bull #78 to the win this year after finishing second last year is absolutely brilliant,” said Sandy Mitchell post-race.

In the overall race, the #563 FFF Racing combination of Andrea Caldarelli, Dennis Lind and Marco Mapelli recovered from a number of set-backs to record a strong eighth place finish, having qualified 20th.