PODIUM JOY FOR STRAKKA RACING AT THE 24 HOURS OF SPA

Twelve months after securing its first 24 Hours of Spa podium finish with its Pro-Am entry, Strakka Racing repeated the feat in remarkable fashion at the 2019 edition of the race, in an event that many drivers stated was held in the toughest conditions of their careers. The squad also recorded its first ever Super Pole qualification at the legendary GT endurance race with the Pro #44 car. 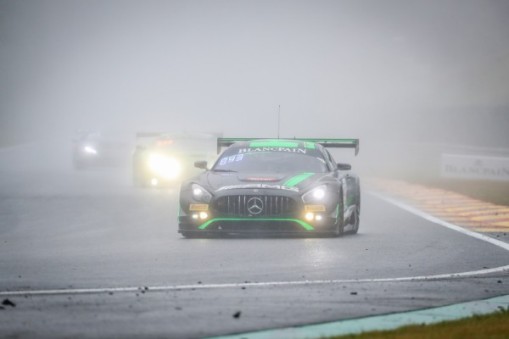 A bumper 72 cars and almost 250 drivers took to the 7.004km Spa-Francorchamps circuit for the 71st Total 24 Hours of Spa. What most couldn’t have predicted was the sea change in weather from the build-up to race day itself, both of which posed its own challenges. After facing temperatures exceeding forty degrees Celsius in the preparation sessions, temperatures plummeted by over twenty degrees on Saturday and Sunday, with torrential rain affecting the race. Tyre strategy proved crucial as the track alternated between wet and dry over the course of the race, which started under the safety car and was peppered with Full Course Yellows and a lengthy six-hour red flag period, starting at the 13-hour mark, due to the dangerous weather conditions.

Car #43 (Christina Nielsen, David Fumanelli, Jack Hawksworth, Richard Heistand) – P3 Pro-Am Class
For the second consecutive year, Strakka Racing’s scored a podium finish in the Pro-Am class of the finish of the notoriously tough race, made even tougher this year by the chaotic and dangerous weather conditions. They started from fifth place in the Pro-Am class after performing well in qualifying. The team drove a solid race, staying out of trouble in dreadful conditions and rarely slipping out of a Pro-Am podium finishing spot, but were hindered by the disruptions of the race in completing their mandatory technical pitstop. Nevertheless, they pushed hard until the end and, despite two late race drive through penalties, had performed strongly and were rewarded with a well-earned position on the rostrum, to make it two out of two Pro-Am podiums for the Strakka Racing and Mercedes-AMG relationship at the Spa 24h.

Car #44 (Tristan Vautier, Gary Paffett, Lewis Williamson) – P20 overall
The trio of Vautier, Paffett and Williamson impressed in qualifying when they secured the first ever Super Pole at the Spa 24h for Strakka Racing. After setting the eighth fastest cumulative time in the group qualifying stage, Paffett then set the squad up for a start from 15th in Friday’s Super Pole session. After running as high as tenth in the opening stints, they were forced into the pits with a front right puncture two hours in and then set about a recovery drive from there as they fell behind the lead lap. The race turned into a gamble of pitstop and tyre strategy as competitors fought the weather, Full Course Yellows and safety car periods. A stop and go penalty for a stint length violation with less than three hours to go dropped them down the order and they took the chequered flag in 20th.

Christina Nielsen, #43: “I think this shows the truth of the fact that to finish at the front you first need to finish. It’s the Spa 24 and anything can happen and it’s about crossing that line at the end. We went up and down, it definitely wasn’t perfect but this was my first time and it’s really nice to finish on the podium. I’m really grateful for the team effort that Strakka Racing put into it, they did a mega job and kept pushing right until the end. It’s not a matter of running into issues, it’s a matter of how you handle them and the team handled it very well. Thank you to my team-mates, I’m really grateful for all the work that was put in by everyone.”

Gary Paffett, #44: “The race was really tricky for us. Initially, we were having some problems. When Lewis was in the car, we had a puncture right after a pit stop and he had to come in once again straight away. Such slight time losses added up during the night and we dropped from the lead lap due to unfortunately timed safety car. Towards the end we got a stop and go penalty and, therefore, our chances for the overall win were unfortunately gone. We had a reliable Mercedes-AMG GT3 that reached the end and it had good pace, so we take that with us to the next round at Suzuka with confidence.”

Jay Davenport, Strakka Racing Director: “That was a truly demanding race for so many reasons and we are glad that the field was able to get to the end of it in such dreadful conditions in a safe manner. For us, we are absolutely delighted to get another podium with the Pro-Am car after such a tough race. To have done it twice with the Mercedes-AMG GT3 is a true measure of performance. It feels like a bit of a missed opportunity with the #44 as we had great pace. As it was, the weather caused everyone to take a bit of a roll of the dice with pitstop and tyre strategy and we were a bit unlucky in that regard. We’re proud that both cars reached the end with no major issues as it shows the strength of the marque. I’m also very proud of all the drivers and the crew for enduring such difficult conditions and doing an excellent job. Next time out, we’re aiming to be back on that podium at the IGTC round in Japan.”

Strakka Racing’s next competitive event is the Intercontinental GT Challenge Suzuka 10 Hours in Japan, which will take place 23-25 August.