Meyer Shank Racing (MSR) drivers Trent Hindman and Mario Farnbacher currently hold a 30-point lead in the GT-Daytona championship standings in the No. 86 Acura NSX GT3 as the duo head to Road America for the eighth GT stop on the IMSA WeatherTech SportsCar Championship schedule. 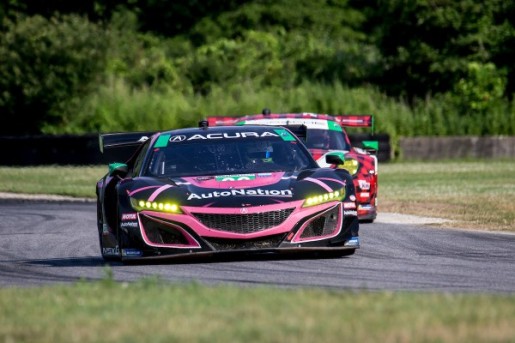 The IMSA Road Race Showcase at Road America comes after a quick two day IMSA event weekend at Lime Rock Park as the team travels from the shortest track on the schedule to the longest, with Road America totaling 4.0-miles and 14-turns.

The team scored second at Lime Rock Park after securing the pole position and leading 129 laps. The trip to Road America is the second of the 2019 season for MSR which competed at the track in NTT IndyCar competition in June.

Hindman and Farnbacher have delivered results for Meyer Shank Racing, which is in its third year of GTD competition in the IMSA WeatherTech SportsCar Championship. The team has scored two podium finishes at Road America (2012 & 2014) but is still looking to capture that first win.

“So far the summer swing has treated the No. 86 MSR team quite well and we certainly look to continue that solid run of results this weekend at Road America,” said Hindman. “Goal number one is always to maintain focus on the bigger pictures and have an aggressive, but smart race at Road America. The Acura NSX has also been monumental in our efforts this year and has maximized results at racetracks that previously were not well suited for us. Again, all of that comes down to the beautiful work by Mike (Shank), Mario and the entire MSR team.”

It’s been three years since Farnbacher has competed at Road America, but his 2016 visit saw him take the pole position. With the championship momentum already under his belt, the German ace is eager for the race weekend.

“I love Road America and it reminds me of Nurburgring,” said Farnbacher. “I haven’t been there since 2016, but I have always loved that track. We had some weight added to our car for the race so we will have to see what effect that has on us. For us, we have have to look at the big picture which is the championship. We need to finish the race and finish in a good position and I believe that with the crew and my teammate Trent, we can do that.”