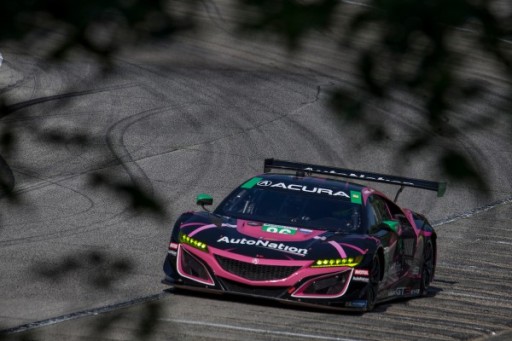 The team finished second in the 2018 IMSA championship and is fully focused on going one position better in 2019.

Taking the green flag, Hindman shrugged off the warm temperatures as he delivered a long opening stint, battling for one hour and 37-minutes before turning the car over to teammate Farnbacher. With additional ballast added to the Acura NSX ahead of the race weekend, Hindman managed those challenges to stay within the top six before pitting on Lap 53 for a driver change.

Two goals were in mind for Farnbacher, saving fuel and bringing home a clean Acura at the finish. The two hour and 40-minute sprint stayed green for the entire race leaving Farnbacher to go into fuel save mode from the first laps of his stint.

The next race for the Meyer Shank Racing crew will be the Michelin GT Challenge at Virginia International Raceway on August 23-25.

Trent Hindman:
“I think this was a pretty telling day in terms of the championship for the Meyer Shank Racing team. We maximized a lot of factors that were outside of our control and brought home a fantastic top five finish. It was also a great strategy by the guys on top of the MSR pit box and we had really wonderful work over the pit wall which is where I think we really made up quite a few positions. Mario did a great job at the end there and really fought hard. Big thanks to the team, HPD, Acura, and AutoNation for a great weekend.”

Mario Farnbacher:
“Trent (Hindman) and I both focused on saving fuel. We managed our track position but we weren’t fast enough. There was a good battle on track between us and the McLaren who had a similar strategy. I saw they were not in fuel saving mode so I took advantage of it. Our goal of the weekend was to score points towards the championship and finish the race and we did just that so I’m happy with the result.”

Mike Shank:
“We didn’t have the outright speed today and we really tried to do the undercut with our stops to try to make up ground. But it is hard with the weight we had in the car and hopefully they will make an adjustment ahead of VIR. We did the best we could given the circumstances and to keep the championship lead.”