The third round of the GT4 South European Series, which will take place at the Circuit de Barcelona-Catalunya, will see an additional eye-catcher as a mixed-gender driver line-up consisting of Francisco Carvalho and Gabriela Correia will make their first appearance in the series. 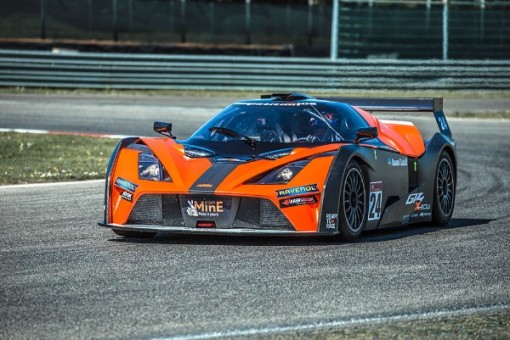 Austria’s KTM machinery, supported by the importer for the Iberian Peninsula, was previously announced to compete at both Portuguese rounds with Fábio Mota and Francisco Carvalho at the wheel. A new male-female driver line-up will encourage interest for Barcelona.
Francisco Carvalho already has prior experience in the GT4 arena as he contested the 2012 Portuguese GT Championship and sealed the title driving an Aston Martin Vantage GT4.

Gabriela Correia will make her GT4 South European Series debut next week as the Circuit de Barcelona-Catalunya. Correia will be the first woman to take part in the series organized by Race Ready with the SRO Motorsport Group support. The 17-year-old driver currently competes in the Campeonato do Portugal de Montanha and the Campeonato Open de Velocidade de Portugal, in which she achieved remarkable results in only his second year.

Gabriela Correia explained: “I am keen to tackle new challenges and push the limits and it is the reason why I have decided to take a chance on the GT4 South European Series. Having said that, the handling of these GT4 cars is completely different to the cars I have driven in the past and there are drivers with vast experience… My goal is to challenge myself and continue developing my own skills as a racing driver. Who knows what my debut has in store! I expect to enjoy the experience to the fullest and take advantage of any opportunity that may arise. My enthusiasm is already going through the roof!”

Francisco Carvalho will kick off the GT4 South European Series season in Barcelona before heading to Portugal teaming up with Fábio Mota. “Barcelona will mark my first taste of the KTM car, which will play a key factor with three events remaining in the season. Besides, Barcelona will be special because a female driver as teammate is always an incentive. I have been closely following her racing career and, despite she is relatively inexperienced, there is untapped potential right there. I hope that my experience will help her to speed up the process. I am looking forward to making my debut in the GT4 South European Series, which is steadily strengthening its presence in the Iberian Peninsula” said Carvalho.

Diogo Ferrão, CEO of Race Ready, is excited with the new mixed-gender driver line-up. “I can assure motorsport is accessible for everybody regardless of gender. We are delighted to welcome Gabriela Correia, a young driver with a strong potential to go. Francisco Carvalho is already confirmed for both Portuguese events, but it is nice to count on him in Barcelona. They are a promising drive line-up and without doubts a thrilling attraction over the course of the weekend.”

The series promoted by Race Ready in partnership with SRO Motorsports Group kicked off at Nogaro, in the Coupe de Pâques, followed by a round held at Jarama. The next round will be held at the Circuit de Barcelona-Catalunya, on August 30th-31st, with the championship set to conclude later in the year with two double-headers in Autódromo Internacional do Algarve and Circuito do Estoril.