Going into the Suzuka 10 Hours weekend, the team were optimistic of a strong result despite it being Mercedes-AMG Team Craft-Bamboo Racing crews’ first endurance race with the Mercedes-AMG GT3. Factory Mercedes-AMG drivers Maximilian Götz, Luca Stolz and Yelmer Buurman were drafted in to give the team a best possible chance at fighting at the front. Despite limited dry running all weekend, the team’s preparation and focus meant that after a hard-fought 10 hour race which saw no mistakes and a great team effort, Craft-Bamboo Racing finished in 4th position, just missing out on a podium spot by 3 seconds at the end. 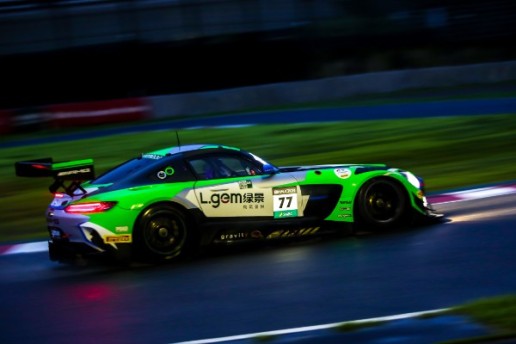 Race Report
Maximilian Götz took the start from 8th position and held his ground on the opening lap. The top few drivers quickly settled into a rhythm, with Götz staying right on the tail of the Ferrari in 7th position. On the narrow Suzuka circuit, Götz was unable to find a way past in the first hour of the race.

However, a combination of clever pit-strategy and a perfect pit-stop execution meant that Luca Stolz in the #77 Mercedes-AMG GT3 found himself ahead of the Ferrari after the first round of stops, moving up to 7th overall. 30 minutes into Stolz’s stint, the 2nd placed BMW up ahead got tagged, allowing Craft-Bamboo Racing to move up into 6th place. Consistent driving meant that Stolz was soon behind the 5th placed Bentley, but was unable to find a way past. As Stolz was stuck behind the Bentley, the team decided to pit.

Yelmer Buurman was next in the car, and pushed hard on his out-lap. However, he was baulked by lapped traffic and was passed by the #999 Mercedes. Several laps later, Buurman also lost another position from being overcut by a Porsche, meaning that the #77 Mercedes-AMG Team Craft-Bamboo entry dropped down to 7th place. Buurman did not lack pace however, as he was all over the back of the Porsche, but his attack was neutralized due to a big crash up ahead. The incident meant that a full course yellow was called, and the team took the opportunity to perform the driver change.

Götz took over during a full course yellow, which became a safety car period due to debris on track. He continued to push hard, but increasing track temperatures meant that he struggled with rear traction. Despite this, Götz managed to hold off the chasing Bentley, and pitted from 7th position.

Luca Stolz took over again about 3 hours into the race, and set to work on closing up the gaps to the cars in front. As the track surface improved throughout the day, Stolz’s pace improved and he closed up to the car in front. He then decisively passed for 6th place soon after, and then set his sights on closing up the gap to the car in front, also passing for 5th place in the ensuing laps.

Buurman took over the controls of the #77 entry with just under half race distance, and was immediately on the pace. Early in his stint, Buurman managed to gain a position as the BMW ahead received a drive through penalty from a pit-stop infringement, moving him up to 4th place.

When Maximilian Götz got in the car, he emerged in P5, with a 16 second margin to the cars in front. He kept his head down and pushed, but a crash at the high speed 130r corner meant that the second safety car period of the race was called. The gaps closed right up and Götz was on the tail of the 4th place Porsche. But a move by the Nissan behind meant that Götz dropped back down to 5th place, and was immediately under attack from the BMW behind. Decisive defending meant that Götz kept the place, and pitted from 7th position.

Luca Stolz then took over again for his third stint of the day, and smart work from the Craft-Bamboo Racing pit-crew meant that he emerged still ahead of the BMW and even closed up the gap to the Nissan ahead. However Stolz was stuck behind a Nissan that was 5 laps down, and after 10 laps of being held up and losing 9 critical seconds, the young German was finally released. He pushed hard, and within 5 laps he had caught up to the back of the Nissan ahead. As Stolz was stuck behind in the turbulent air, the team decided to pit to do a driver change in the hope of undercutting the cars in front.

A quick in-lap from Stolz gave Buurman a good track position, and when the Nissan ahead emerged from the pits, Buurman swooped around the outside to take 4th place. In the ensuing laps, Buurman was put under pressure from the two cars behind, but Buurman was often one of the fastest cars on track in the cool, night conditions, and managed to maintain a margin to the car behind. Buurman kept his head down as the two cars behind him battled, and managed to maintain 5th position.

As darkness had descended on the circuit, Götz took over for the final stint and had work to do; the BMW behind was catching up and there was a podium opportunity up for grabs; the gap to the third placed car was under 5 seconds. Götz pushed on into the darkness, and with time running out, he pumped out consistently fast laps in a bid to attack for 3rd place. However as the clock ticked to zero, Götz took the chequered flag in 4th position, only 3.5 seconds behind the 3rd placed car.

Mercedes-AMG Team Craft-Bamboo Racing would like to extend special thanks to LVGEM, as well as Mercedes-AMG Customer Racing for their valued support, as well as all team members that have played a crucial role in this result.

Quotes
Maximilian Götz | Driver #77 Mercedes-AMG GT3
“It was such an enjoyable weekend with the team and I’d like to say thank you to all the crew for the hard work this weekend. After having good pace in Qualifying despite no dry running in Practice, we were still able to fight up front. For sure missing out on the podium by such a small gap leaves us wanting more, but this shows the high level of performance that Craft-Bamboo Racing operate at. Hope to be back with the team to race again in the future!”

Luca Stolz | Driver #77 Mercedes-AMG GT3
“It was my first time with Craft-Bamboo and it was really an amazing time, and the car was well prepared and setup. We had a good weekend; with qualifying being quite strong and we made lots of progress in the race towards the front. A strong P4 for us in the end, after it being almost a 10-hour sprint race, but on the other hand it was a shame to miss out on the podium by less than 4 seconds. I hope I can come back to Japan to race again as the fans are amazing and I had a lot of fun!”

Yelmer Buurman | Driver #77 Mercedes-AMG GT3
“It was a fairly tough weekend, we lacked a little bit of pace but we made the most of it! We pushed really hard and made no mistakes, P4 is definitely not bad but you want to be on the podium so that’s a little bit disappointing. We got some good points and it was a pleasure driving for Craft-Bamboo Racing and hopefully we can do that again soon!”

Darryl O’Young | Director of Craft-Bamboo Racing
“It was quite an exciting race with immensely intense competition with all the lap-times similar for the top 10 cars. It was difficult to gain track position. I’m really proud of the team, everyone did a fantastic job with the strategy and pit-stop execution which ultimately put us in contention for the podium at the end. It was unlucky with the ill-timed safety car that dropped us down the order, but we fought back hard and came so close to a podium. Thanks to everyone and to LVGEM, as well as Mercedes-AMG Customer Racing for the support!”