K-PAX Racing brought its best to the 10th round of Blancpain GT World Challenge America Sunday, contesting for the win on multiple occasions with both its second-generation Bentley Continental GT3s at Watkins Glen International. The team managed to add to its podium total for the weekend, finishing second and third in the finale. 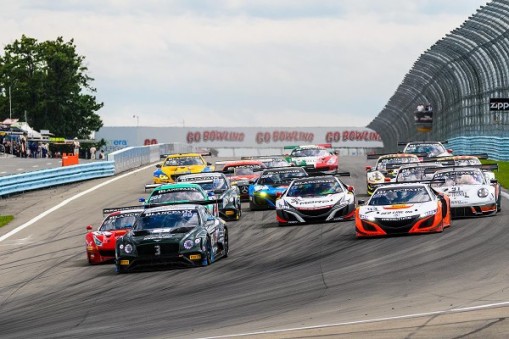 Through 10 rounds, K-PAX Racing has 16 podiums to its credit – four at The Glen. The team has been able to reach the podium at least twice in each of the last five events of the series schedule.

Saturday’s second batch of qualifying dictated the starting order – a format introduced for the 2019 season. Co-driver of the No. 3, Max Soulet, was less than three-tenths of a second off pole position with a 1:43.586. Andy Soucek, sharing the seat of the No. 9, qualified seventh overall (third in class).

The green flag waved the 16-car field down the front-stretch for 90 minutes, but Soulet took no time in getting a jump on the leader. Soulet secured first position into the first corner. However, the No. 3 spun off-track in the eighth turn from contact by the No. 61. Soulet was able to reenter the field immediately, but he had to battle from last in the field.

“We respect the stewards and race control – though we did not necessarily agree with their decision,” said K-PAX Racing Team Manager Thomas Blam, commenting on a “no-penalty” call following the incident. “But we respect their call. We’re just more disappointed with the way the R. Ferri guys want to race. In the first turn, on the first lap and in the first race, Rodrigo [Baptista] got a big run on the R. Ferri car, and he could have stuffed it in there. He could have forced the issue but gave them room. [Toni] Vilander didn’t give us the same courtesy today and put it in a place where he went way over the curb and spun Maxime out of the lead.”

“We’re obviously still heated and disappointed with what happened. It cost the No. 3 car a really great opportunity to win this race and to get back into the championship. We did a great job recovering and getting up to third, but a win would have been really important for us. We’ll just have to see how things go moving forward, and if they want to race us that way, then we can certainly race them that way. They have a lot more to lose than we do.”

Since the incident, Soulet spent his stint in recovery mode – consistently recording times in the mid-1:45.000s. He recorded the fastest lap in the field at the halfway point with a 1:45.178. Soucek was able to climb to sixth overall – third in class.

The No. 3 was first to pit of the K-PAX Racing entries in an effort to recover more time. Both teams had a speedy pit-stop, with Álvaro Parente and Rodrigo Baptista joining the field in third and sixth position respectively. While Baptista was able to make quick work – picking up two positions within the first half of his stint – Parente had his sights set on leading the closing laps of the event finale.

Nearing the hour-mark, Parente continuously challenged the No. 61 entry for second position – first in class. Eventually, the Pro-Am car leading the pack gave way for the two to battle for the win. Meanwhile, Baptista was making his charge toward podium position by putting pressure on the No. 58 entry. Baptista was able to complete the pass for third, while Parente stood strong in second.

“I said to the guys last night, ‘A close friend and really great race car driver was really disappointed for not winning a race one day, and he was being a bit gloomy on the podium…,” Blam said. “After the podium I said, ‘Look, it’s very infrequent that you can get on the podium.’ To have as many podiums as this team has had this year – four this weekend – you should really relish that. We can all end up in a situation down the line where you might not see a podium for a long time. Sure, we wanted and needed the wins here for the championship. But you have to be pleased with four podiums.”

“The No. 9 car came up from seventh, and the No. 3 car got spun around and recovered to third which is really impressive. We had great pit-stops today from the crew. I’m pleased. There’s a lot to look forward to – especially Road America, where we should be really good.”

Álvaro Parente – No. 9 Bentley Continental GT3 (Race 1 – 2nd, Race 2 – 2nd) – “There’s a little bit of mixed emotions here. It’s a shame we couldn’t get passed the Ferrari. Andy and I gave it our all. We lost some points in the championship. Yesterday was really the killer as we had the win in our pocket. It’s very hard to lose it like that when you’re fighting for a championship. Then, the mistake the Ferrari did on our teammates and not getting penalized. It’s wrong.”

Andy Soucek – No. 9 Bentley Continental GT3 (Race 1 – 2nd, Race 2 – 2nd) – “Álvaro was definitely the quickest one out of us this weekend, so we had to rely on him unfortunately because my qualifying was not great. I think that’s partially why we couldn’t fight with the Ferrari more. I think if we would have started further ahead, it would have been less ground to the front. I feel a bit guilty but on the other hand, sometimes things don’t go the way you want. I’ve had some good qualifying sessions this year and this one wasn’t one of them – and in a crucial moment. I have mixed emotions. Second place is still all right, but we lost points which increases the gap in the championship. But look, there’s still 100 points in-game. Anything can happen.

What they did today was unfair. I haven’t seen the footage [of the incident involving the No. 3], but I believe what Max [Soulet] told me. It’s a bit unfair not to give them a penalty. If that’s fair and you can do it, I guess racing is open. That means the next races will be very exciting for us two.”

Rodrigo Baptista – No. 3 Bentley Continental GT3 (Race 1 – 3rd, Race 2 – 3rd) – “It’s a shame what happened to Max [Soulet]. We had a great car and great pace. We were in front. We had the pace to win the race. During my stint, I was trying just to recover. I knew the car was quicker in the straight-line, but a little slower in the corners than the Porsche. We had a lapped car and I just tried to pass them together on the straight. I’m happy for the team. One more podium.”

Max Soulet – No. 3 Bentley Continental GT3 (Race 1 – 3rd, Race 2 – 3rd) – “It was a very good start. The team did a perfect job calling the green. We took the lead, and then I think everyone saw what happened. Toni [Vilander] apologized, but that doesn’t change the result. I think we could have won this race. But that’s racing and tomorrow is Monday. We’ll forget about this. I enjoyed this weekend. The car was really good. Rodrigo [Baptista] did a perfect job, and K-PAX Racing was on-point like usual.”