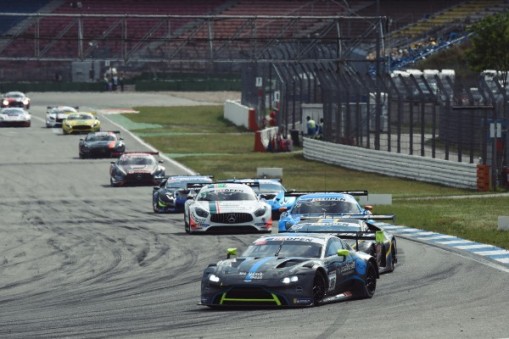 The 23-year-old heads to the home of the British Grand Prix with the memory of his maiden outright GT Open victory in the series’ 200th anniversary race still fresh in mind. Upgraded to a Silver and Pro level driver by the championship in May, the Yorkshireman has been on a roll ever since.

Bagging his first outright Pro podium that same weekend at Hockenheim before claiming race victory at the Red Bull Ring in July, Ollie has since taken his first overall British GT Championship win at Spa-Francorchamps and been crowned the 2019 British Silver Cup Champion.

Rewind a year and the 2018 Silverstone GT Open outing saw Wilkinson earn a second Pro-Am class win of his debut season in the series, thanks to a gutsy drive battling a late-race puncture which demolished his Audi R8 LMS’s three second class lead. He and British GT team-mate Bradley Ellis also won the Silverstone 500 Silver Cup class back in June, finishing fourth overall.

With the caveat of serving a maximum pit stop success penalty in the first GT Open encounter at Silverstone next weekend, Wilkinson and stablemate, Aston Martin works driver Darren Turner, will be hard pushed to feature in the top three on Saturday.

The new track surface at the circuit will also be an unknown commodity until official practice on Friday, but the Optimum duo have all eyes on delivering another podium-worthy result in race two on Sunday.

“Winning the 200th GT Open race at the Red Bull Ring seems like yesterday, but now I’m really looking forward to our only UK GT Open round at Silverstone,” says Ollie. “We had a mega race there last year, where keeping our class win literally came down to holding on in the final three corners with a left-rear puncture. It’s a good confidence boost as we head back for our first outing there on the new track surface. That gives us another new learning curve in what is still our first season with the new Aston Martin, because a lot of the data we had from the British GT Silverstone 500 is now irrelevant.

“With the pit stop success penalty to serve from our epic Red Bull Ring win, race one will be tough. If we push hard and get a good qualifying run on Sunday, we should be in with a good shot for race two. The Aston suits Silverstone, we just need to build the set-up to suit the new track and get on top of the tyres. Friday practice will be interesting to get ready for the weekend, hopefully we can make rapid progress to be at the sharp end come Sunday.”

The International GT Open action at Silverstone starts on Saturday, 7 September, with qualifying at 10:50 followed by the first, 70-minute race at 16.15. Qualifying on Sunday takes place at 10:05, with the final 60-minute race at 15.00. All sessions will be aired live via the series website www.gtopen.net,