Blancpain GT World Challenge Europe was back in action last weekend at one of the continent’s most historic venues. A pair of sprint races at the Nürburgring have set up a thrilling finale in Hungary, where class titles will go to the wire in Pro, Silver Cup and Pro-Am. 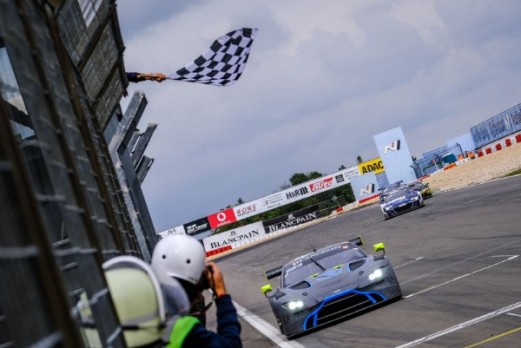 There was certainly nothing predictable about the German event. Both races were won from the third row of the gird, while a number of on-track incidents made for exciting viewing – particularly during the latter stages of each 60-minute contest. Even the weather was uncharacteristically hot.

As teams and drivers prepare for the deciding contest in Hungary, here are some of the key stats and stories from the penultimate Blancpain GT World Challenge Europe round of the season.

The Nürburgring event produced classic sprint racing. Both contests began with a relatively calm opening stint, while the second 30 minutes brought a deluge of action. Weather-wise it was a perfect weekend, with temperatures particularly high on Friday and Saturday. Conditions were cooler on Sunday, though a brief threat of rain did not come to pass and the full event was run on dry-compound Pirelli tyres.

Orange1 FFF Racing duo Andrea Caldarelli and Marco Mapelli became the first repeat winners in the Pro class this season. The #563 Lamborghini previously triumphed at Misano before adding a second in the opening Nürburgring contest. Their six podiums from eight races is also a high for the Blancpain GT World Challenge Europe this season and has helped them to establish an eight-point cushion at the top of the standings.

Lamborghini’s fine form continued at the Nürburgring, the highlight coming in race 1 when the brand scored a one-two finish. Though the Italian marque is represented by just two Pro class cars, it has nevertheless been on the podium in every Blancpain GT World Challenge Europe race this season, with six for FFF and a further four scored by Grasser Racing.

The victory was the first for both Ricky Collard and Marvin Kirchhofer. Indeed, neither driver had scored a Blancpain GT Series podium before Sunday’s race. It was clear how much the win meant to 23-year-old Collard, who leapt on to the roof of his car to celebrate. The Briton is new to the team this season having previously driven a BMW for the ROWE squad at Endurance events.

Christopher Haase and Simon Gachet (#25 Sainteloc Audi) continued their fine form with a pair of top-three finishes at the Nürburgring, meaning they have now taken four podiums from the previous five races. They will travel to Hungary as Audi’s sole championship challenger, a significant achievement for the French outfit and its driving duo.

Sunday’s race saw a number of squads take their best result of the season. Aurelien Panis and Jack Hawksworth scored fifth place in the #23 Tech 1 Lexus, giving the Japanese machine by far its best result of 2019 in only the second outing for the pair. This equals the car’s best sprint-race finish in 2018, when Emil Frey ran a pair of RC F GT3s.

The Silver Cup winners also hit new highs. In race 1 the Attempto Audi of Mattia Drudi and Milan Dontje finished sixth overall to secure a maiden class win, a result that was mirrored on Sunday by Oscar Tunjo and Rik Breukers (#10 Belgian Audi Club Team WRT). Both crews were in excellent form, running with the overall leaders and keeping their cool when the action stepped up a gear.

Race 2 saw a breakthrough result for the #26 Sainteloc Audi duo of Steven Palette and Markus Winkelhock, who took P7 and their first points of the campaign. Nürburgring was an all-round improvement for the pair, who went the distance in both runs. The #5 Phoenix Audi also bagged its first points of the campaign as Kim Luis Schramm and Jamie Green finished P9 in Sunday’s contest.

Perhaps the most contentious moment of the weekend came during race 2 when the leading Belgian Audi Club Team WRT machines made contact at turn 1. Charles Weerts was ultimately judged to have been predominantly to blame for the clash, which eliminated both cars from the contest. The youngster’s move on teammate Ezequiel Perez Companc has earned him a reprimand and one behaviour warning point, while no further action was taken against the Argentine.

Dorian Boccolacci made his Blancpain GT Series debut in Germany, joining Stephane Ortelli in the #24 Sainteloc Audi. The 20-year-old Frenchman arrives in GT racing following an impressive junior single-seater career that included finishing second in the 2016 Formula Renault Eurocup standings. Boccolacci took a best finish of 11th at the Nürburgring and will compete once again at this weekend’s Hungaroring finale.

The outright fastest lap of the Nürburgring weekend was set by Dries Vanthoor (#1 Belgian Audi Club Team WRT), whose 1m54.439s qualifying effort set an unbeatable benchmark. Indeed, Dries was fast whenever he hit the track at the Nürburgring. The quickest racing lap was set by Ricky Collard, who recorded a 1m56.452s while hunting down the leading WRT Audis in Sunday’s contest.

Mattia Drudi was the clear star of the Silver Cup class in Germany. The Attempto Audi driver set pole for Saturday’s opening race and ran with the overall leaders throughout his stint. The Italian was also the fastest Silver Cup driver in both races, with his 1m56.906s on Sunday proving to be the best of the weekend. Such performances suggest that Drudi may soon be joining the Pro ranks.

Phil Keen was the fastest man in Pro-Am, recording a 1m57.026s lap in race 2. In terms of qualifying pace, David Perel led the way with a 1m55.109s that put him ninth on the overall grid. Indeed, both Perel and Keen have shown impressive speed throughout the season as they battle for Pro-Am honours.

The Am Cup was a two-car battle at the Nürburgring, with each car picking up a win at the German venue. They were also close in terms of lap times: Rory Penttinen set the best in the opening race with a 1m58.674s. In race 2, Wolfgang Triller was the pace-setter with a best lap of 1m58.692s – just 0.018s shy of his rival’s quickest the previous day.

After eight races staged over four weekends, the championship battles remain finely poised ahead of the Hungaroring decider. The closest contest is in the Silver Cup class, where just 1.5 points separate leaders Nico Bastian and Thomas Neubauer (#89 AKKA ASP Mercedes-AMG) from second-placed Mattia Drudi and Milan Dontje (#56 Attempto Audi). There is everything to play for in the Pro and Pro-Am categories as well, with multiple crews in contention for each class title. A full preview of the championship decider can be found here [link].

The season-deciding weekend will kick off with a pair of 80-minute free practice sessions on Friday, the first at 10.25 and the second at 15.20. Qualifying will take place at 10.30 on Saturday morning, with the penultimate race of the season following at 15.10. The season will on Sunday at 13.45 with a final 60-minute dash for glory. Support action comes from Formula Renault Eurocup, X-Bow Battle and the FFSA F4 French Championship.