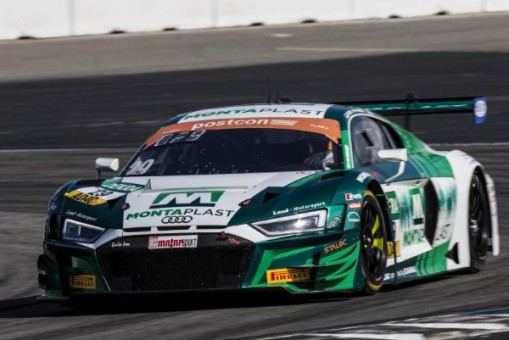 Mies went to the top of the timesheets with a lap of 1.39.508 minutes some 45 minutes into the hour-long session. He then went on beat his personal best with a 1:39.285. The Audi driver was ultimately 0.108 seconds faster than runner-up Matteo Cairoli in the Porsche. “Practice was quite good,” said Mies, who shares the drive with Max Hofer (20, AUT). “However, it was quite a while before we got a clear lap, which is why we posted our hot time pretty late. Not all teams ran new tyres in the session, so it’s hard to tell where we stand, but the car went well generally. However, I think Corvette and Mercedes-AMG should be stronger here.”

Cairoli in P2 was pleased with practice. He shares the 911 with Adrien de Leener (30, BEL): “Practice was good – especially in view of yesterday’ technical problems. We haven’t yet found the right set-up for Hockenheim but have made progress now. The car is gradually improving. Nevertheless, we still need to optimize set-up. Things will get better with new tyres, I think.”

Third live event in ADAC GT Masters Esports Championship
Next round in ADAC GT Masters Esports championship. The third of four live events for the new SimRacing series will be held at Hockenheim on Saturday, starting at 7.00 pm in boxes 20-22. The eight regulars will go up against four wild card drivers. The races will be broadcast live on the ADAC GT Masters Facebook page as well as on YouTube and on RaceRoom’s Twitch channel. SPORT1 and the pay-to-view TV channel eSPORTS1 will also report in full. There’s a special treat in store for fans at Hockenheim on Sunday. They will be able to have a go themselves at posting a hot lap in the simulators.

T3 Motorsport work overtime
There was plenty to do at T3 Motorsport after the Nürburgring weekend. The team from Radebeul near Dresden had to totally rework their GT sports cars following the collision on the opening lap of Race 2 involving Maximilian Paul (19, GER) and another competitor, who went into a spin just in front of him, badly damaging the team’s Audi R8 LMS. Montaplast by Land-Motorsport provided support by straightening out the car on their jig. “Otherwise we would never have got the car finished. Many thanks once again!” said Jens Feucht, T3’s CEO. “We completed the repair on Tuesday evening at 8.00 pm and then immediately loaded up the truck.”

New driver pairing at Propeak Performance
Prosport Performance are returning to the ADAC GT Masters at Hockenheim with an Aston Martin Vantage GT3. The outfit, who compete as Propeak Performance, using Aston Martin GT cars, had left out the races at the Nürburgring. Car 98 will be driven by newcomers to the series, Matthew George (24, GB) and David Griessner (25, AUT). They both have previous experience of racing with Aston Martin in GT4. “With David Griessner and Matthew George, Prosport Performance are smoothing the way for two young drivers so that they can go to the next level, in this case, the enormously strong Super Sports Car League,” said Team Principal, Christoph Esser. “We want to offer promising talents the opportunity to show what they can do now in the two final race weekends of the season and give Prosport first choice of drivers for the 2020 season. Promoting young talents has always been part of the DNA at Prosport Performance and is an investment in our future.” Double entrant, Mike David Ortmann (19, GER) will compete in the ADAC GT4 Germany for the outfit from the Eifel and race an Audi for BWT Mücke Motorsport in the ADAC GT Masters.

PS on Air with Fabian Vettel and Felix von der Laden
On Saturday, Mercedes-AMG driver Fabian Vettel (20, GER, Mann-Filter Team HTP) and ADAC GT4 Germany driver and YouTuber, Felix von der Laden (25, GER) will be Patrick Simon’s guests on ‘PS on Air – The ADAC GT Masters Talk Show’ at 8.30 pm when he will welcome the younger brother of Formula 1 ace, Sebastian Vettel, and the social media star to the Hockenheim paddock. The programme will be broadcast live on youtube.com/adac, on the ADAC GT Masters Facebook channel and on Patrick Simon’s YouTube channel: youtube.com/Patsimon75.